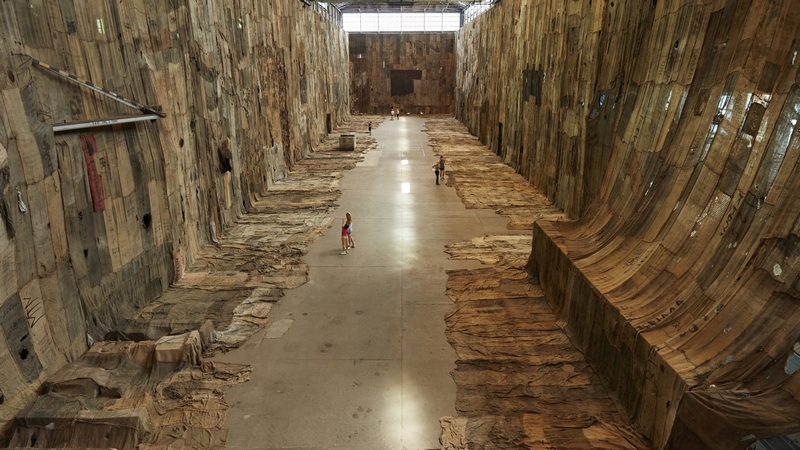 In the 22nd Biennale of Sydney, theme is everything. Curated by the Indigenous artist Brook Andrew, the title is Nirin – a Wiradjuri word meaning “edge” – with the accompanying public program titled Nirin Wir, or “edge of the sky”.

With more than 100 artists and collectives from 36 countries, the coherence of the theme is the key to making sense of the various approaches, attitudes and ideas circulating throughout six venues: Cockatoo Island, the Museum of Contemporary Art, the Art Gallery of New South Wales, the National Art School and Artspace in Sydney, and Campbelltown Arts Centre on the south-western edge of the city.

But to appreciate the BoS’s current form, it’s important to understand its recent history.

In 2014, the biennale was rocked by protests from artists over connections between the organisation and its corporate sponsors. The outcome was the resignation of the BoS chairman, and the departure of longstanding corporate sponsorship and a number of private philanthropists.

In the three biennales that followed, there has been a discernible curtailment of the event. While the number of venues has remained more or less constant, some aspects of the BoS have either been downplayed or eliminated entirely.

There have been fewer big-name international artists, with the Chinese superstar artist Ai Wei Wei a conspicuous anomaly among many lesser known artists in 2018.

For 2020 the BoS is an even more modest affair. There are no art superstars, few media-friendly eye-catching works, and although a catalogue is promised to appear in time for the opening weekend, there aren’t any conventional wall texts: just an information sheet on an Officeworks clipboard pegged to the wall.

You might say this is all irrelevant to the exhibition itself, and in many ways it is. But it’s also intentional. This BoS sets out to give voice to the artists of colour and of First Nations who have been marginalised by a Eurocentric art world obsessed with fame and money. The unnecessary expense of past events has now been replaced with a virtuous negation. And with the first Aboriginal artist/curator in the history of the BoS at its helm, the show has a mission.

For Andrew, Nirin proposes that “creativity is an important means of truth-telling, of directly addressing unresolved anxieties that stalk our times and ourselves. More importantly, it is a place from which to see the world through different eyes, to embrace our many edges and imagine pride in sociologically and harmonious self-defined futures.”

So how do these ideas actually play out in the exhibition?

At Campbelltown Arts Centre, the uniting logic of the selection is to explore the archive of Indigenous histories, from photojournalism and street posters to various approaches to auto-ethnography.

One of the standout works is Barbara McGrady’s Our Ancestors Are Always Watching (2020), a multiscreen video installation of densely collaged photos, music and text.

As a Gomeroi yinah (woman), McGrady’s photojournalism has recorded the variety of Aboriginal experience through, as the artist puts it, a “black lens”. One part of the text in the video states: “WHEN SOME ARTS ELITIST SAYS YOU ARE ONLY A SPORTS PHOTOGRAPHER … IT’S MORE THAN SPORT.”

The declarative tone and didacticism of McGrady’s video is like many other works across Nirin, on the one hand declaring its cultural importance and relevance, while on the other refuting the very world in which the show operates.

Artists working in more subtle, metaphoric ways were, for this viewer at least, far more successful.

At the National Art School, Mexican artist Teresa Margolles has installed Untitled (2020) which features a blood red curtain creating a long, rectangular room. Inside is a heated metal plate onto which drops of water fall from above. When the droplets hit the surface they evaporate in a puff of steam, but leave a mark.

The work is a powerful memorial for Mexico’s murdered women who number in the hundreds every month.

A similar approach can be found at the Museum of Contemporary Art in Aziz Hazara’s five-channel video Bow Echo (2019). In it, Hazara, from Kabul, deals with the problem of representation: how does one effectively represent horror, anguish and violence?

Hazara applies the question to the wave of suicide bombings that have taken place in Kabul over the last two decades; he presents five small boys atop a high mountain peak, Kabul city laid out behind them. The boys blow toy trumpets, the score of the video pounding out an ominous deep tone.

Without knowing the background of the work, the video is undeniably effective; its reference points make it devastating.

At the Art Gallery of NSW, the theme of “edge” places a counter-history of art right in the middle of the European tradition. Curator Brook Andrew has created a version of his own work from the 2015 Asia Pacific Triennial. But where in Queensland, Andrew had placed his own large canvases into the gallery’s colonial art collection, here at the AGNSW a variety of work by other artists have been placed among the often-visited collection of colonial pastoral scenes, monumental history pictures of battles and explorers and marble busts of notable grandees.

The results are mixed – some of the dissonance is effective, at other times baffling.

Andrew has made another gesture that pretty much claims the entire biennale as a work of his own. Using the pseudonym Powerful Objects, he has placed a variety of archival objects from private and museum collections through all of the venues.

In some cases, this elegantly extends the new works into a wider historical perspective, but just as often it’s confusing, clouding the reading of the actual BoS works without any clear definition between who did what, and why.

Cockatoo Island has become the BoS’s key venue, its major industrial spaces and decrepit small rooms a challenge to any artist who works there. The Nirin theme there is largely inconsistent and disparate, but at a push one might consider it as the place where the edge ceases to be a metaphor and becomes literal – can you find all the art without a map?

One standout work I did find was Algerian-French artist Mohammed Bourouissa’s Brutal Family Roots (2020), which belies its title and offers the visitor a gorgeous wattle-yellow zone to chill out in, to smell the flowers and listen to lovely ambient music. Creating connections between language, music and cultures, the work operates on the same metaphorical level as Nirin’s best works.

Which is not to say some tougher aesthetics don’t go a long way too. Tucked in a corner at Woolloomooloo’s Artspace – where the theme is collaboration and connection – is the work of Tennant Creek Brio: a group of Aboriginal men who live in the remote Northern Territory and make anarchic art: paint-covered pokie machines and canvases featuring mysterious, heraldic figures.

A video plays on a pokie screen showing the artists working in their studio, driving around at night, and dancing. It looks like a lot of fun, and so is the art.