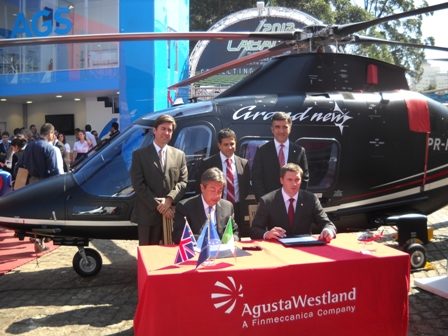 The rise of the super-rich in the BRIC countries, India’s terrible roads and nightmare traffic led to a high helicopter demand in
India. That’s despite the cost of $1.5 million to $15 million per chopper.

A joint venture of AgustaWestland and Tata announced that they’re building a new helicopter factory in Hyderbad to keep up with demand with India’s sudden helicopter hunger. Experts say India’s civilians will buy at least 250 choppers in the coming years, and orders are surging 12% a year.

“Business people are very keen to take helicopters now because it saves them a lot of time and it’s also safer,” a former Indian
Airports Authority chief told The Times.

Growing urbanization and population concentrations combined with a growing middle class and dynamic economic growth are driving demand and this trend is expected to continue. Despite near term challenges, the Indian economy is forecast to continue expanding, helping India’s growth in domestic air travel to reach even higher growth rates of nearly 10 per cent annually, making it one of the fastest growing aviation markets anywhere in the world.

More on aviation in India