AI artwork sells for $432,500 — nearly 45 times its high estimate — as Christie’s becomes the first auction house to offer a work of art created by an algorithm.

This portrait, however, is not the product of a human mind. It was created by an artificial intelligence, an algorithm defined by that algebraic formula with its many parentheses. And when it went under the hammer in the Prints & Multiples sale at Christie’s on 23-25 October, Portrait of Edmond Belamy sold for an incredible $432,500, signalling the arrival of AI art on the world auction stage. 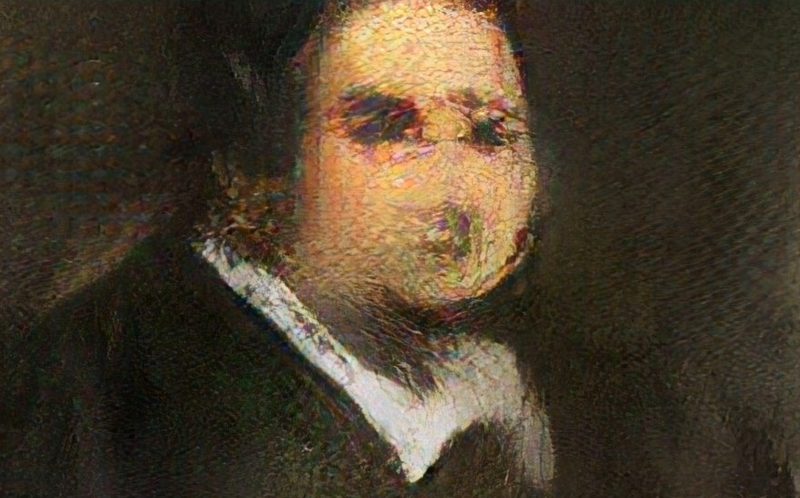 From a distance, Portrait of Edmond de Belamy, which has just sold at Christie’s in New York for $432,000 (£337,000), looks almost plausible. Up close, however, the paintwork becomes a grid of mechanical-looking dots, the man’s face a golden blur with black holes for eyes. Look into those eyes. They show no sign of feeling or life. Did a computer make this?

The answer is yes. The first artwork generated by AI to be sold at Christie’s, its impressive price would seem to suggest that in future we will get computers to make art for us. Robot van Gogh will harmlessly cut its ear off and robot Picasso will be a genius, minus the misogyny.

Is this the future AI art visionaries such as the French collective Obvious, which programmed this “painter” by getting it to compare its own work with 15,000 pre-20th century portraits, have in mind? Or are they just, God forbid, making a fast buck from gullible art collectors? Because believing the algorithm that knocked this up to be in any meaningful way an “artist” is like thinking your voice-interaction programme is out to get you. Dream on. Computers would need to replicate human consciousness before they could replicate the funny thing humans do called “art”.

Art is a way in which human consciousness expresses itself, and is equally true of the earliest cave art, Rembrandt’s portraits and Duchamp’s urinal. And that is what is missing from Portrait of Edmond Bellamy. Art is a way humans communicate ideas, perceptions and feelings to each other. It has no existence outside the human passion to communicate. So in what meaningful sense can an AI replica of certain physical traits of old master paintings be called art?

For a robot to really make art, it would need an autonomous mind that was emotional as well as rational. No AI developer has yet claimed to be anywhere near achieving that and if they ever do, their creation will probably have better things to do than paint portraits – like destroy humanity.

Maybe afterwards robots will invent their own kind of art, but it won’t be some poor pastiche of human genius. It will be beyond anything we organics could imagine.