The Mille Miglia 2017 will held from 18 to 21 May on traditional route Brescia-Rome-Brescia. The date, as per tradition, is one week before the Monaco Formula One Grand Prix. 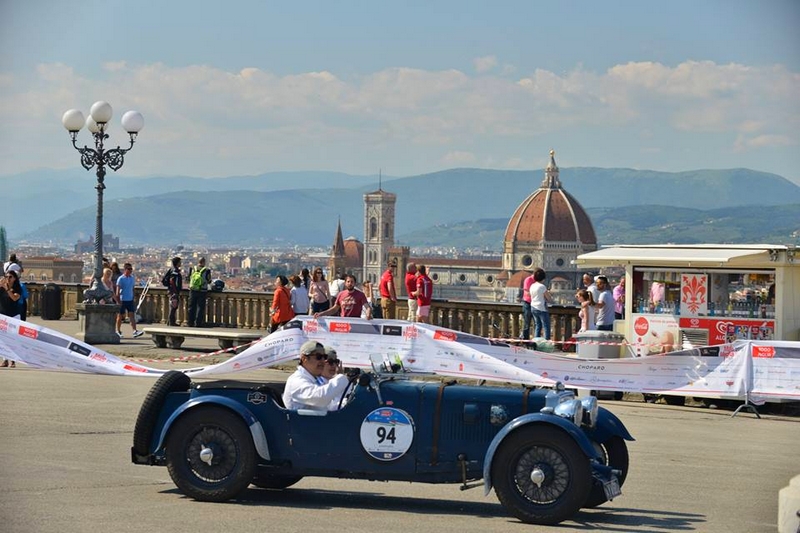 For three decades, Mille Miglia classic car race has been bringing together exceptional personalities to the world of sport. Today, the reenactment of the Mille Miglia is an event in a class of its own.

From Thursday 18 to Sunday 21 May, the famous historic car race will pass through more than 200 municipal areas in Italy, 7 Italian regions, and the Republic of San Marino.

For its ninetieth anniversary, the Mille Miglia – the first edition of which was held in 1927 – presents the thirty-fifth re-evocation edition. The international presentation took place today in Geneva, traditionally a meeting place of different cultures and multi-ethnic and multi-denominational dialogue, in keeping with the atmosphere of international friendship that has always characterized the Freccia Rossa.

Confirming what Enzo Ferrari called the Mille Miglia – “the world’s unique traveling museum”, from Thursday 18 to Sunday, 21 May, the spectators to the four stages from Brescia to Rome and back can admire 440 vintage cars of extraordinary historical, technical and sporting value, from eighty-two different Car manufacturers, and hundreds of different models.

To complete this number, never before achieved by any other classic car competition, there will be a further ten cars belonging to a ” Military Category”, driven by senior officers of the different Italian Armed Forces, as happened in the Mille Miglia of 1952.

These 440 design and mechanical masterpieces, built before 1957 (the year of the last speed edition), will create an unrivalled automotive event, along approximately 1,700 km of Italian roads. This will be made even more fascinating by a further 150 cars – produced after 1958 – participants in the “Ferrari Tribute to MilleMiglia” and “Mercedes-Benz Mille Miglia Challenge”, reserved for mostly modern cars of the two Manufacturers. 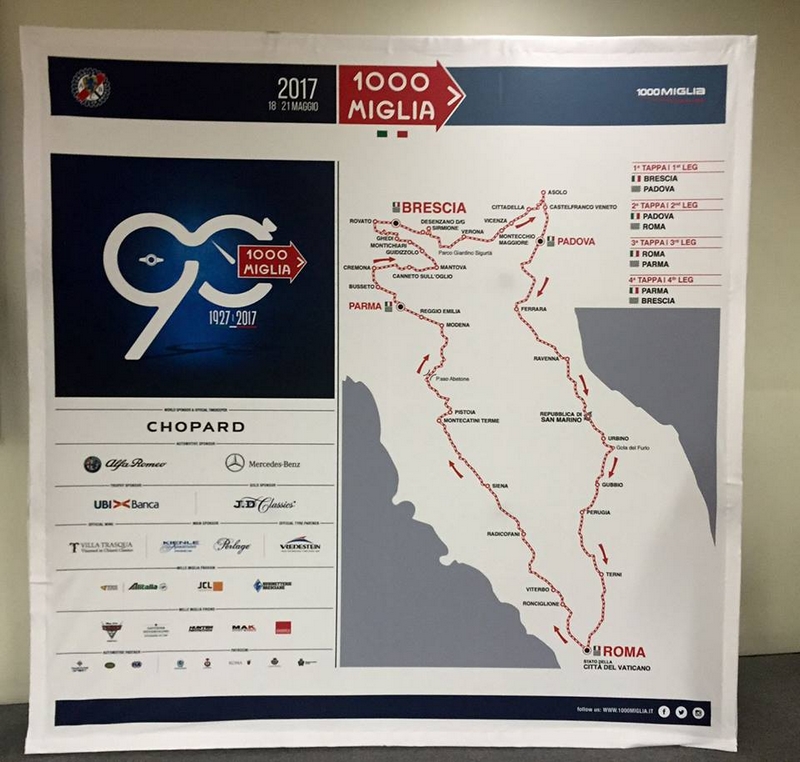 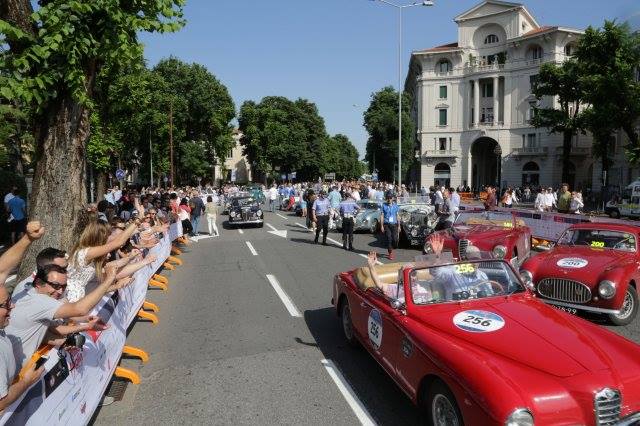 FROM COLLECTIONS AND MUSEUMS, PRICELESS TREASURES AT THE START

Among the many reasons that make the Mille Miglia incomparably refined, exclusive and prestigious is that it is the only way possible to admire, all at the same time, priceless treasures that have written the most beautiful pages of international motoring. Among the Museums that will send their cars to Brescia, there are  Alfa Romeo, Mercedes-Benz, BMW and Porsche.

Among the vehicles belonging to private individuals or museums, ninety-two cars will be returning to Brescia after having taken part in at least one edition of the Mille Miglia, between 1927 and 1957.

The selection, carried out by a panel of international experts and scrutineers, was performed on 705 applications from 41 countries. 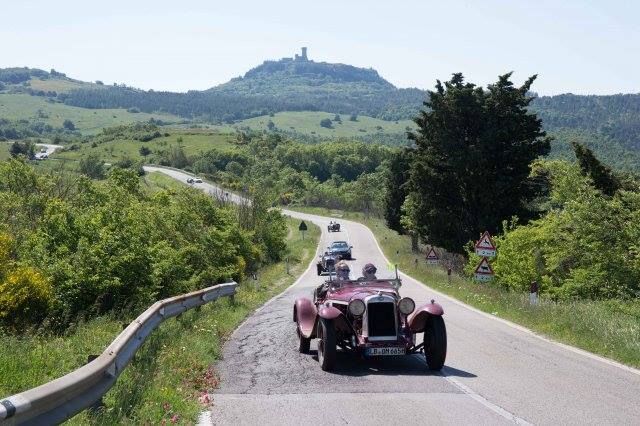 Documents needed to take part in the most prestigious vintage car race:

Cars of which at least one model had been entered in the Mille Miglia speed editions, from 1927 to 1957, have been accepted. These cars must be one of the models on the list of candidate cars, published on the official website of the competition. In order to be selected, the entered cars had to have at least one of these documents: Fiche ACI-CSAI (Italian Motor Sport Commission), the FIA HTP (Historic technical passport issued by the Fédération Internationale de l’Automobile) or FIVA ID (Identity Card of Fédération Internationale des Véhicules Anciens). 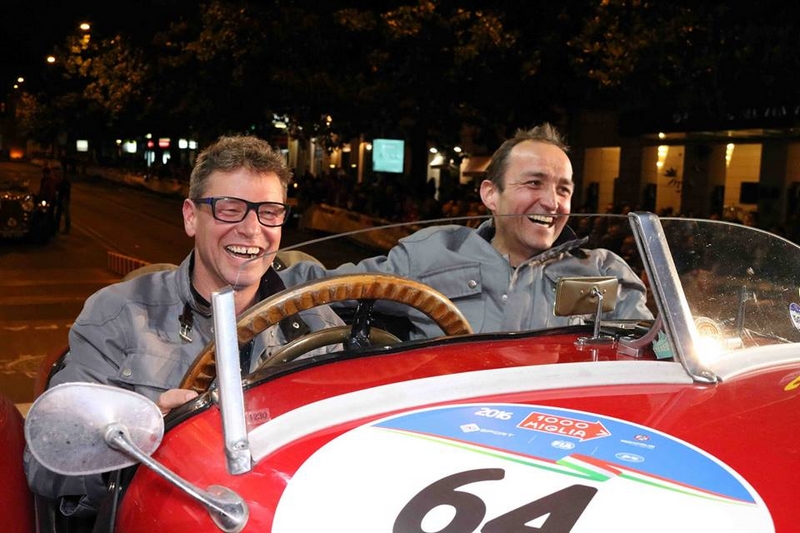 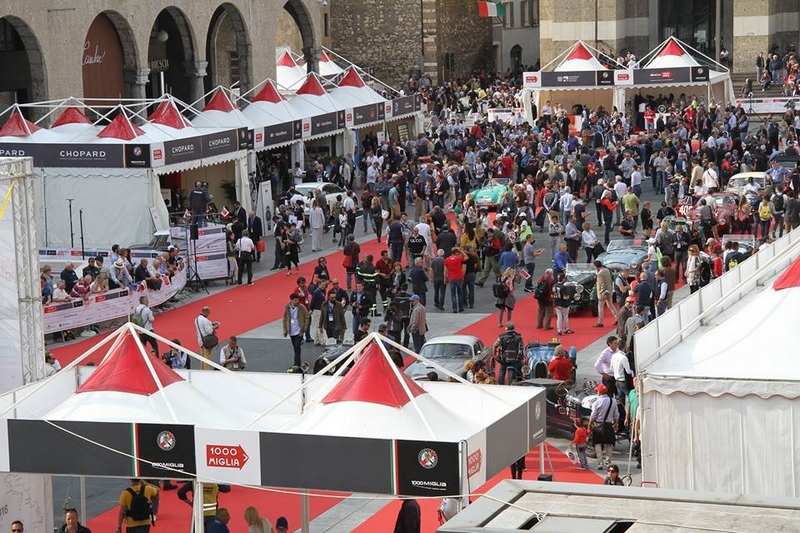 A BREATHTAKING RIDE BETWEEN HISTORICAL TOWN CENTRES AND NATURE RESERVES

Mille Miglia 2017 will continue to be run over four stages. The preview (Tuesday 16 May) will be the Trofeo Roberto Gaburri, a regularity race with about a hundred cars taking part. After checks and stamping, as always carried out at the Fiera di Brescia and, subsequently in Piazza della Vittoria, the Mille Miglia 2017 will start from Viale Venezia, at 14h30 on Thursday 18 May.

Respecting the tradition started in 1927, the route starts and ends in Brescia, passing through half of Italy before and after the halfway mark in Roma. From Brescia, after the classic drive past Lake Garda and passing Verona, the cars will head for Vicenza, closing the first leg in Padova.

The following day, Friday 19 May, the second leg will take competitors to Rome. In order to accept all the requests on an alternating basis, in 2017 Freccia Rossa will not travel south along the Adriatic coast but will move inland, through Umbria. The classic cars will leave Padova from 06h30 and will pass through Ferrara, Ravenna, San Marino, Urbino, Gubbio, Perugia and Terni. Arrival in Rome is planned at around 21h30, with the parade in Via Veneto and the customary tour of the eternal city at night. 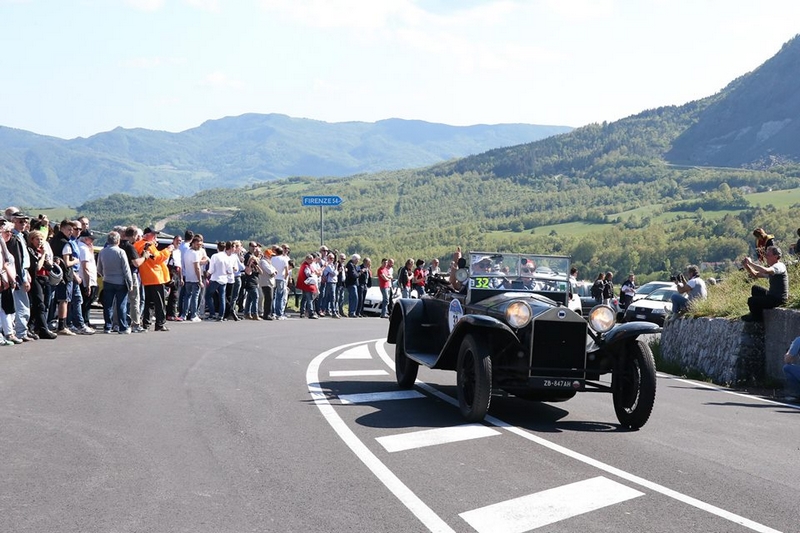 Saturday 20, will see the start at 07h00, the route leaving the Capital will remain unchanged until Tuscany. The most traditional route of the race will include Ronciglione, Viterbo, Radicofani and Siena, where the spectacular parade in Piazza del Campo is not to be missed. From here, in answer to repeated requests, Mille Miglia 2017 will veer north passing Montecatini Terme and Pistoia, crossing the Appennines at the Abetone Pass, to then travel along the Po valley from Reggio Emilia to Modena. The third leg will end in Parma.

From here, on the morning of Sunday 21 May, the start will be at 07h30. From the Po Valley, the long Freccia Rossa convoy will drive through Cremona and Mantova. There will be a break for lunch in Rovato, where participants will be able to taste local delicacies such as the characteristic manzo all’olio (beef with oil). The final leg will see the teams reach the finishing line in Brescia.

From 14h30 onwards, for the umpteenth time, Viale Venezia in Brescia will see the checkered flag coming down on the Freccia Rossa.

The programme and route of the Ferrari Tribute to Mille Miglia and the Mercedes‐Benz Mille Miglia Challenge will be the same as the Mille Miglia, except for the start and arrival of the first leg, Thursday 18 May, which will be respectively in Desenzano del Garda (from 13h45) and in Ferrara (from 21h30). 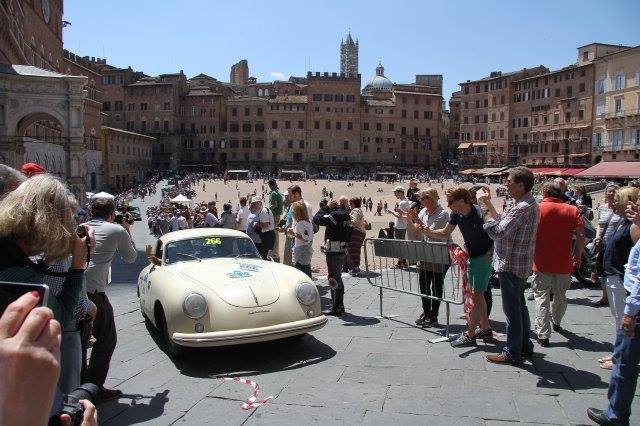 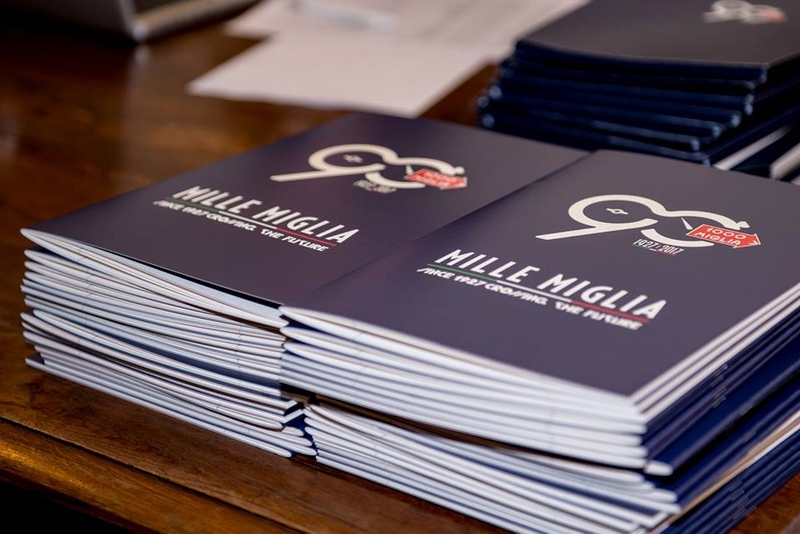 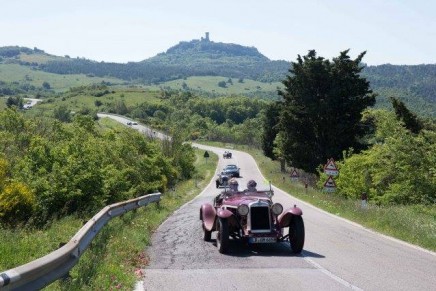 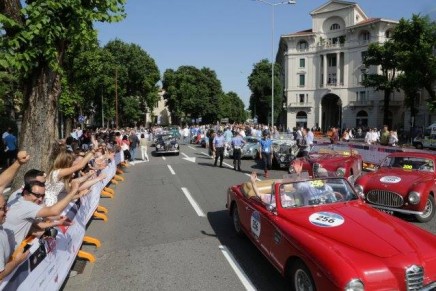 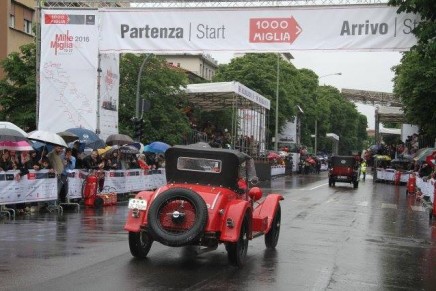 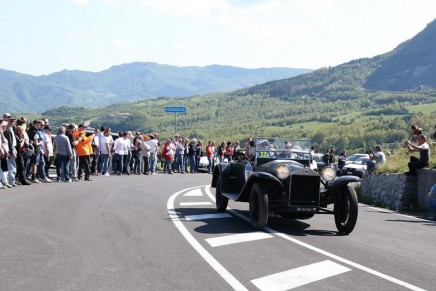 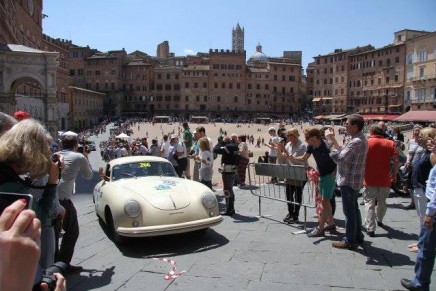 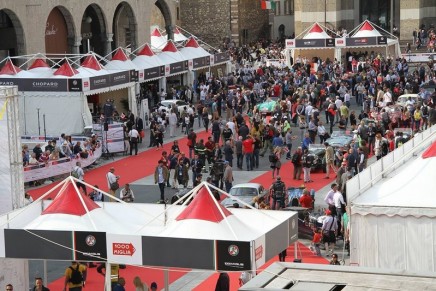 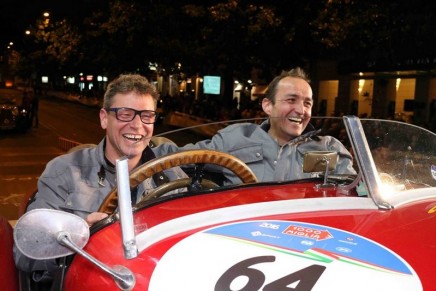 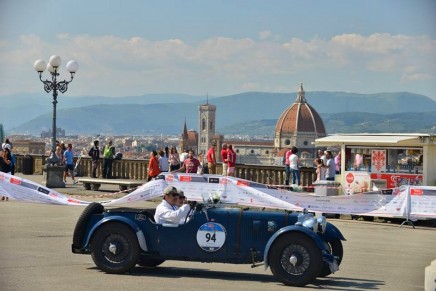 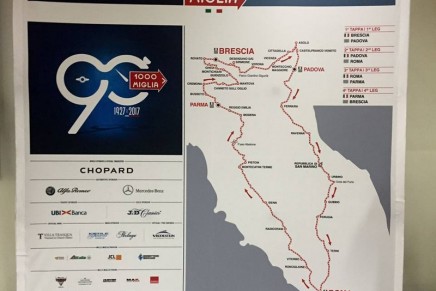 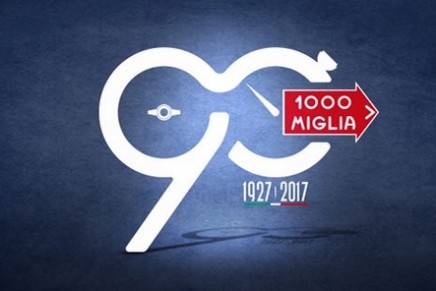 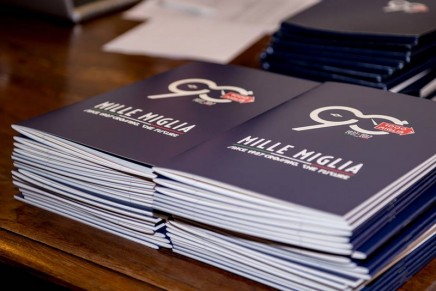