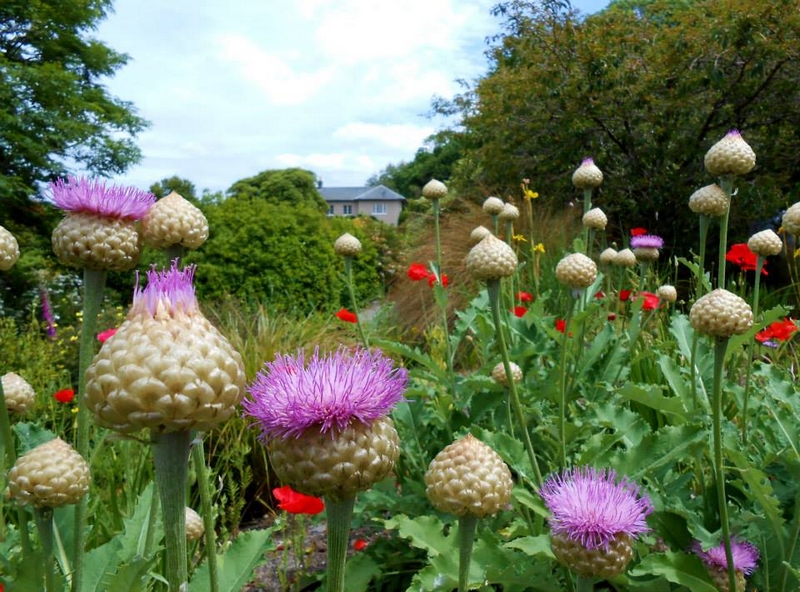 This article titled “10 of the UK’s best gardens to explore” was written by Joanne O’Connor, for The Observer on Sunday 2nd August 2020 06.00 UTC

Colin Firth described this National Trust-owned garden in the foothills of Snowdonia as “spellbinding and wonderfully peaceful” after shooting scenes there for the new film adaptation of Frances Hodgson Burnett’s children’s classic, The Secret Garden, released later this year. Among the garden highlights making their big-screen debut were the laburnum arch, a 55m walkway beneath a canopy of golden flowers, and an idyllic stream that runs through a gorge garden, where the Mary Lennox character goes swimming in the film.
• Open daily. Booking essential. The shop and cafe are currently closed. Admission: adults £8, children £4, family £20, nationaltrust.org.uk/bodnant-garden

On the banks of the River Cherwell, the peaceful gardens at Rousham were first laid out some 300 years ago by celebrated Georgian architect and designer William Kent, who dotted the landscape liberally with classical temples, follies and statues, ponds and water features. His vision has remained remarkably intact. Closer to the house, the walled garden features box-edged borders, old roses, espalier apple trees and a circular pigeon house. It’s refreshingly free of commercial trappings – no shop or tea room, and payment is via an honesty system – so pack a picnic and enjoy the tranquillity.
• Open daily from 7 August. Admission: £8. No children under 15 are permitted, rousham.org

The gardens surrounding this 18th-century manor house usually host a season of opera in the summer months. Many events had to be cancelled, but visitors can still enjoy soaking up the serenity of the magical walled garden, entered via a wisteria-covered arbour, the Lakefield with its collection of garden follies and the paradise water garden. The tea room is open for takeaways that can be enjoyed in the orchard.
• Open Wednesday-Sunday, booking essential. Admission: adults £9, children £5. Parking £4 per car, westgreenhouse.co.uk

Like a cottage garden but on a grand scale, the romantic walled garden at Leighton Hall would no doubt meet with the approval of Frances Hodgson Burnett. It has roses clambering up walls, borders bursting with colour and an ornamental veg patch and herb garden. Wander beyond the 19th-century walls for woodland walks and parkland with lovely views of the Lake District.
• Open Thursday and Sunday afternoons until September. Booking essential. Admission: garden only, £5.95. House tours must be booked: adults £9.75, children £5.95. The tea rooms and playground are open, leightonhall.co.uk

Although the castle remains closed, its medieval towers make the perfect backdrop to this beautiful Arts & Crafts-style garden designed by the acclaimed architect and furniture designer Sir Robert Lorimer. In summer the romantic walled garden is filled with the fragrance of old roses and there’s a kitchen garden that grows organic fruit and veg.
• Open Thursday-Monday. Admission: adults £3, concessions £2, nts.org.uk

This is not the place to come to see pristine borders or manicured lawns, but this wildness is undoubtedly what caught the attention of location scouts who used Helmsley as a backdrop for some scenes in The Secret Garden. Lockdown took the garden – which is run as a charity offering horticultural therapy to vulnerable adults – to the brink of permanent closure, but a successful crowdfunder campaign has secured its immediate future and enabled restoration of this 18th-century kitchen and flower garden to continue.
• Open Friday-Sunday. Admission: adults £7, under-16s free, helmsleywalledgarden.org.uk

The Gardens of Easton Lodge, Essex

The Secret Garden is all about bringing a forgotten garden back to life, and that’s exactly what’s happening at Easton Lodge. Here, the formal gardens laid out by Edwardian designer Harold Peto for the Countess of Warwick in 1902 are being restored by volunteers after decades of neglect. Normally the gardens open once a month, but this summer they’ll also be opening each Thursday for cyclists and walkers (no parking on these days) for a chance to see ongoing work on the Italian sunken garden, treehouse, walled kitchen garden and tree glade.
• Open one Sunday a month (next, 16 August). Admission: adults £4.50, children free. Book ahead for parking. Also open Thursdays for walkers/cyclists. Admission £3, children free, eastonlodge.co.uk

The creation of this magical garden has been a 40-year labour of love for its owners. Although it’s just a few miles inland from the popular north Norfolk coast, it remains something of a secret and the layout – a series of themed “garden rooms” connected by archways and leafy avenues – means that even in high summer you’ll be able to find a quiet corner to have to yourself.
• Open Wednesday-Sunday and bank holidays, afternoons only, until October. Admission: adults £10, children £1. The tea rooms are open, e-ruston-oldvicaragegardens.co.uk

Explore the atmospheric ruins of the 18th-century Demesne House perched on a rugged headland and take in the coastal views from Mussenden Temple before heading to the walled garden, home to sheep, an apple orchard and sheltered lawns – the perfect spot for a picnic. The National Trust recently completed work on the restoration of a “secret garden” near the Bishop’s Gate entrance lodge, transforming it into a shady semi-woodland garden for visitors to enjoy.
• Open daily. Booking essential. Admission: adults £5, children £2.50, family £12.50, nationaltrust.org.uk

A successful crowdfunder campaign has enabled this much-loved garden to re-open its gates for the summer. Highlights include the cottage garden with its distant views of Dartmoor, the summer garden, with its sweeping banks of grasses and “prairie-style” planting, the Jubilee arboretum with its lake, waterfalls and bridges, and the wildflower meadow and acer glade.
• Open Friday-Sunday. Admission: adults £12.80, children under 16 free, thegardenhouse.org.uk

Many gardens have restricted opening hours and booking ahead is often necessary. Some cafes and shops are closed. Please check relevant websites before visiting