Market-disruptive ideas like this are uncommon, and if successful, have the potential to revolutionise industry.

The challenge of breaking the world record satisfies a tenacity to achieve great things. But more importantly, it’s the perfect way to practically demonstrate that the theory behind this technology works.

White Motorcycle Concepts has unveiled a revolutionary new prototype motorcycle which company founder and Chief Executive Officer Rob White will ride when he attempts to break both the British and world electric land speed records over the next 12 months.

The WMC250EV high-speed demonstrator, White’s brainchild, is more than two years in the making and heralds a new chapter in the evolution of motorcycle technical development. It is the result of a determination to turn an inspired vision for vastly reducing aerodynamic drag into reality, having won support and recognition from all corners of Britain’s fertile motorsport engineering industry. 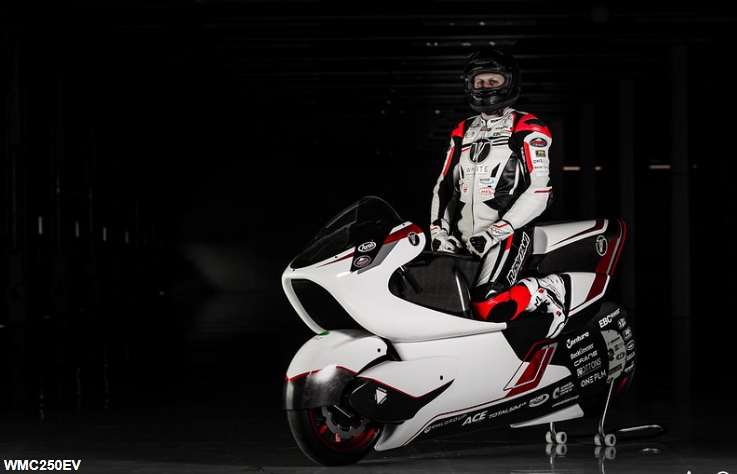 The prototype motorcycle, which is capable of speeds exceeding 250mph, features three market-disruptive technologies including WMC’s ultra-low drag system called V-Air. This innovation features a large duct at the centre of the bike which forces air through the vehicle, rather than around it. Incredibly, V-Air reduces the WMC250EV’s aerodynamic resistance by as much as 70% compared to that of the market-leading high performance road bike according to the results of wind-tunnel testing at MIRA.

The duct also increases the axial load on the front of the motorcycle allowing the WMC250EV utilise a D-Drive motor unit that powers the front wheel, which in-turn makes it possible to harness regenerative braking energy – something unachievable with a conventional motorcycle. Finally, the bike carries a unique F-Drive final drive system fitted to boost power and enhance efficiency; a technology that could be retrofitted to improve existing roadgoing bikes.

WMC’s concept has already been granted a UK patent and expects Europe, the USA and Japan to follow suit by the end of August. If adopted by major manufacturers, these British devised technologies have the potential to vastly reduce CO2 emissions across the industry and rapidly accelerate the mass-market de-carbonisation of motorcycles globally. White, who has more than 25 years’ experience of world championship level motorsport, including Formula 1 and Le Mans, initially conceived his idea for V-Air six years ago, but it was exposure to Formula 1 packaging and sports car aerodynamics that gave him the confidence to pursue it seriously. 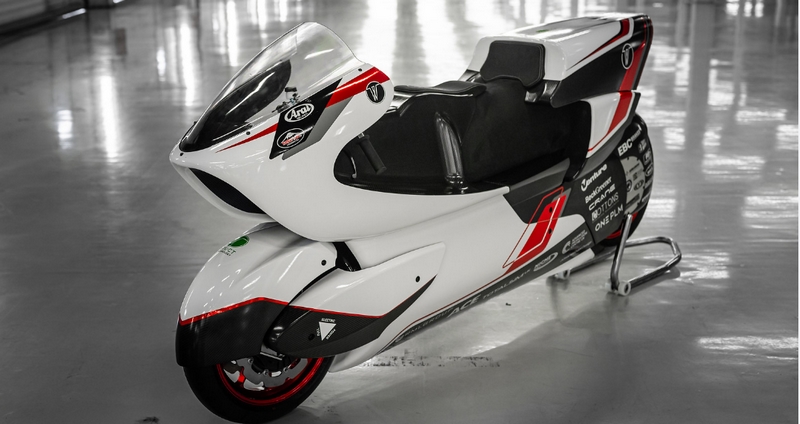 Having formed WMC in 2019, White reached into his vast network of contacts gained through his varied and successful career in the sport. Rob Lewis MBE, the owner of Total Sim and a global leader in sports aerodynamics, recognised V-Air’s potential and supported the project through the initial proof of concept. With a base established in Northamptonshire, the global centre of motorsport excellence, WMC began developing the all-carbon fibre WMC250EV High Speed Demonstrator to F1 standards of design specification, component-packaging and technology with the ambition to test its potential to the highest standard.

“If you want to demonstrate to the rest of the world that you’ve just invented a new aerodynamic concept that means you can go faster for a given power, the best thing to do is go as fast you can,” says White. “That’s why we created WMC250EV high-speed demonstrator, the most radical version of this concept, to challenge for the world land speed record. It is electric, as that is the pre-eminent zero emissions power source at the moment, but as the aerodynamic concept provides efficiency benefit, it could just as easily be hydrogen or any other future power source.”

But speed is just the beginning, the concept’s more wide-reaching and important implication is the huge impact it can have on vehicular energy efficiency, which combined with the zero-emission agenda, can lead to a large reduction in CO2 emissions globally.

“The records are all champagne, but are actually the insignificant part of the story,” says White. “While this technology allows you to go faster, it also allows you to go much further for the same amount of energy. This has a direct and tangible benefit on C02 reduction. Market-disruptive ideas like this are uncommon, and if successful, have the potential to revolutionise industry. 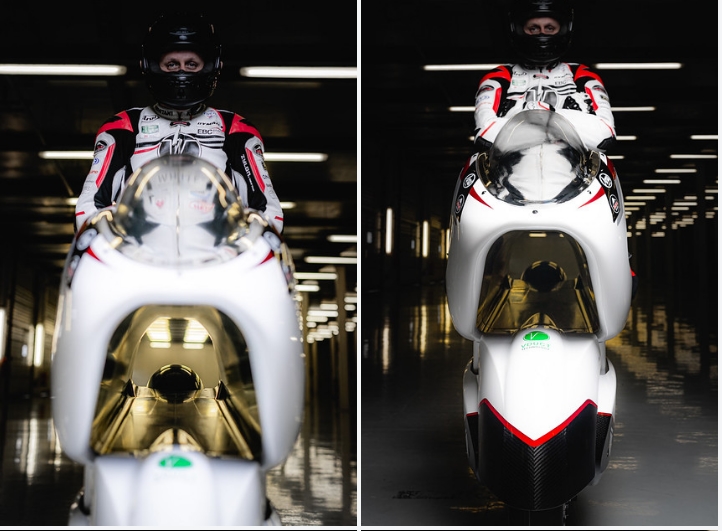 WMC is already working on a real-world application for the innovation and is producing a 300cc three-wheel hybrid scooter – the WMC300FR – that includes V-Air technology and reduces drag by 25%. That equates to 18% improvement in fuel efficiency, from aerodynamic improvements alone and when coupled with a small hybrid system enhances the performance to somewhere near 500cc levels, but with 50% less CO2 emissions.

“What we’ve managed to do is create something for the world market sector where people can use these vehicles in a city where the population is most effected by C02 output and pollution – and we’ve managed to cut C02 by 50% through aerodynamics and hybridisation.”

The land speed record programme meanwhile is fully underway, with shakedowns continuing through the summer and an attempt on the Motorcycle Electric Semi Streamliner British Record planned for later on this year. Then the focus for WMC switches to the world’s largest salt flat, the Salar de Uyuni in Bolivia, where White will attempt to set a new mark for the Electric Semi Streamliner World Record in July 2022. 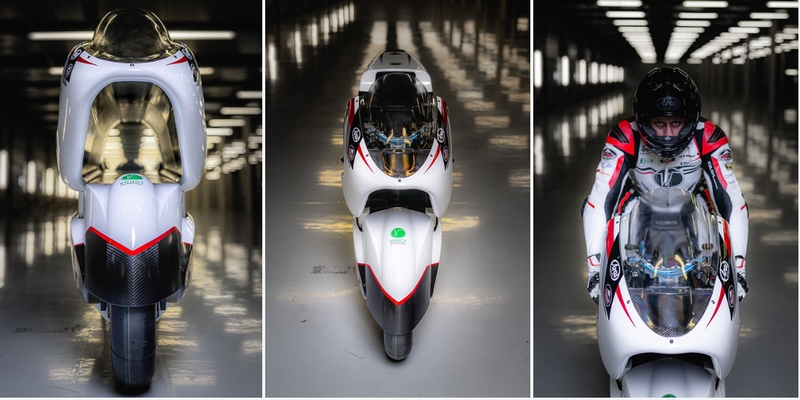 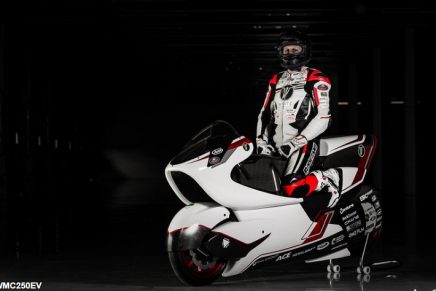 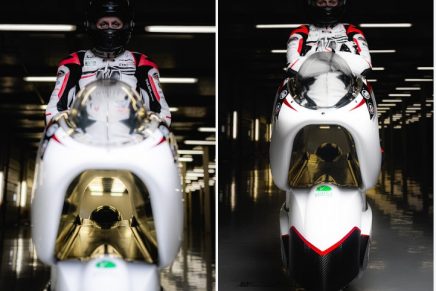 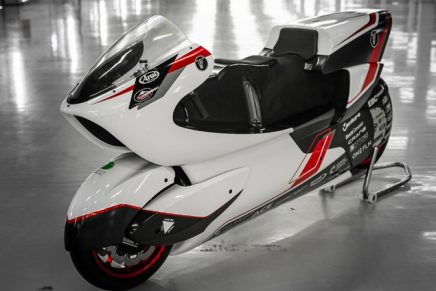 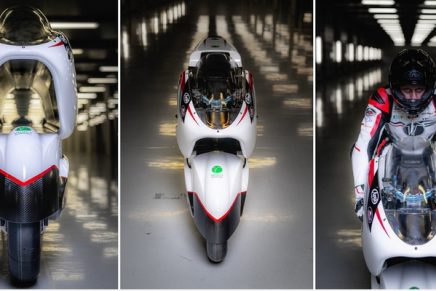 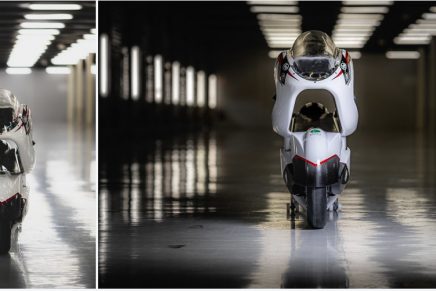