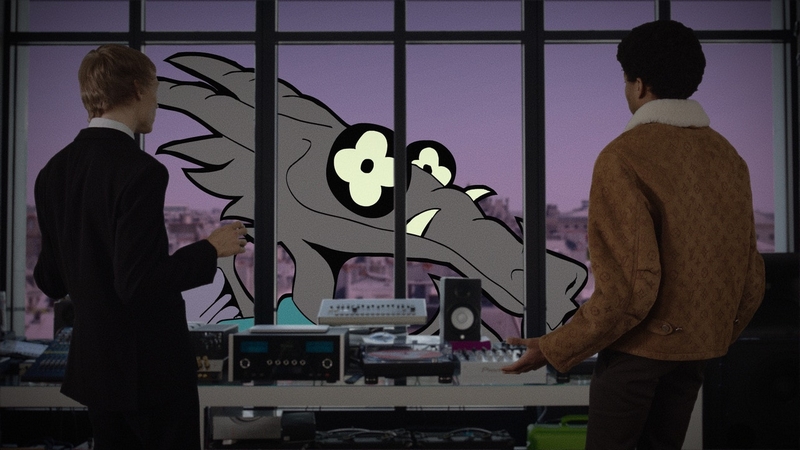 #LVMenSS21: The Adventures of Zoooom with Friends.; @Louis Vuitton

Fashion designer Virgil Abloh presents a new concept for his latest Louis Vuitton menswear collection in lieu of the traditional fashion show format. The Men’s Artistic Director imagined a virtual and literal voyage across the globe starting at Louis Vuitton’s ancestral home in Asnières, France. Follow a colorful crew of animated characters hiding as stowaways and stay tuned for the collection’s next port of call in Shanghai this August.

With physical fashion shows on hold, Louis Vuitton has presented its take on the digital fashion show, with a menswear film that blended animation and photography like a trippy take on Who Framed Roger Rabbit.

The three-minute film featured cartoon characters that bounced off landmarks in an empty Paris: an uncanny Kermit-esque frog loomed over the Arc de Triomphe; a pterodactyl soared over the River Seine. There were few clothes – aside from one suede jacket and a couple of Vuitton-branded boiler suits with face masks – which, a press release explained, was because the collection would launch gradually over coming months, travelling by sea to eventually be shown at a physical show in Shanghai on 6 August.

The label’s menswear artistic director, Virgil Abloh, told trade title WWD that this new approach would be “seasonless” and that, rather than returning to the status quo, he wanted to use the enforced disruption to propose “a new system”.

The event on Friday was preceded by the launch of a $1m (£800,000) scholarship fund for black creatives by Abloh, who faced a huge backlash for his comments about looting following George Floyd’s murder.

Abloh was was pilloried for expressing disgust at the damage to streetwear designer Sean Wotherspoon’s shop and mocked for donating only $50 to a protester’s bail fund.

The scholarship is intended to change that conversation, its initial $1m endowment – with more investment planned – available to support at least 100 students of “academic promise of Black, African-American, or of African descent” through a range of educational programmes.

Even before the recent backlash Abloh had often faced criticism for his stated tactic of tackling representation in fashion in a “Trojan Horse” manner, through his perspective and work.

“In the tone of 2020, I come under the microscope a lot,” Abloh told Vogue on Thursday, speaking about the launch of the scholarship. “That same microscope doesn’t focus on others. But that’s the way the chips have landed.”

“I’m not gonna go back to business as usual and pretend that the awakenings that we’re still in the midst of aren’t happening,” he continued. “I didn’t take it lightly before but I think that, because my voice wasn’t distinct and loud enough, it didn’t resonate. To me, it’s always existed in my work for those who look at my work… But, since so many people wanna know more: here. Caveat: it’s on my terms.”