THE URWERK AMC PROJECT: A world first in the history of watchmaking debuted at SIHH 2019 in Geneva.

Urwerk, the award-winning watch manufacture based in Geneva, Switzerland, known for its avant-garde designs and new indications and complications,  also presented the UR-105 CT MAVERICK timepiece – a self winding Maverick in bronze and titanium, and the selfwinding URWERK’S new UR- 111C watch. 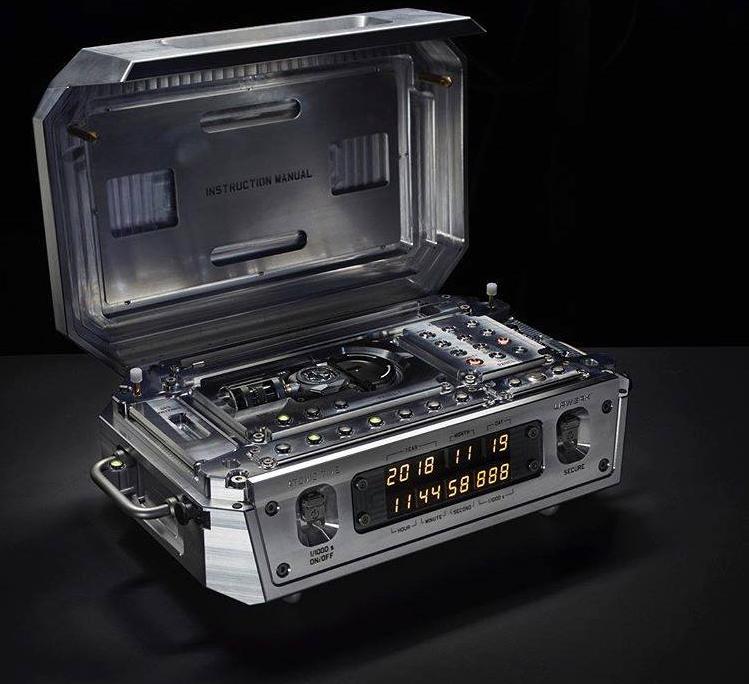 Urwerk AMC is not just a fascinating combination of atomic, and mechanical watchmaking systems; photos: urwerk.com/

The URWERK AMC is a hybrid timekeeping construction that consists of two autonomous, but linked, systems.

The first part – the Atomolith – is a fixed base unit, a 35kg aluminium-housed atomic clock with roughly the same dimensions as a mid-sized computer tower. The second part is a mobile unit, a purely mechanical watch that can be worn on the wrist or securely docked within the base unit.

When worn, the accuracy of the mobile unit is dictated by its 4Hz (28,800vph) mechanical oscillator and the conditions it is subjected to. When docked, the mobile unit is synchronised with its base unit, via a complex and ingenious system that senses any timing discrepancy between the two and chronometrically aligns the mechanical movement of the wristwatch with the high accuracy atomic clock.

Docking the wristwatch not only corrects the time display, it also adjusts the mechanical oscillator within to beat more accurately, compensating for any minute changes in temperature, air pressure or humidity. These micro-adjustments, when performed regularly, have the effect of a pacemaker on the heart of the mechanical movement. Over time, its chronometric performance becomes merged with that of the atomic clock, says Urwerk. 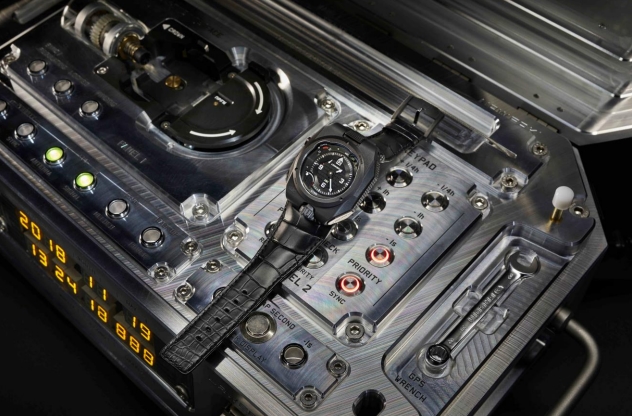 The watch includes typical URWERK features such as the power reserve indicator and two stacked barrels for a power reserve of four days. The watch also has URWERK’s Oil Change Indicator, which shows when the movement should be serviced. One full rotation of the oil change indicator will take more than four years, with a recommended service after three and a half years of operation.

The atomic clock interacts with the mechanical watch in three ways. The first, and perhaps the most challenging technically, involves regulating the rate of the watch. The second operation, which is distinct from the rate adjustment, is the exact synchronization of the minutes and seconds display of the watch with that of the atomic clock. The third operation for winding the watch is straightforward: a shaft extending from the base unit acts on the crown to wind the wristwatch when the latter is placed in its cradle at night.

The more frequently the Urwerk AMC is synchronised, the closer the mechanical wristwatch comes to keeping the same rhythms as the atomic clock in the base unit. When the mobile unit is docked with the base unit, synchronisation can effectively be activated manually up to once every hour. Without manual intervention, the base unit cycles through an automatic programme that synchronises the mobile unit in preset intervals. 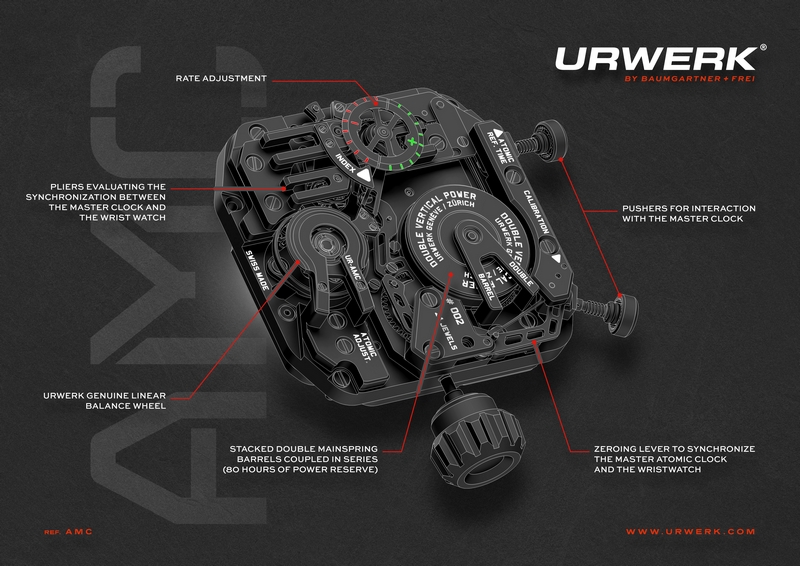 The atomic clock base unit is the time reference of the URWERK AMC system. It is placed in an enclosure measuring 45cm x 30cm x 18cm; it weighs approximately 35 kilos and the case is solid aluminum. The clock, developed in collaboration with SpectraTime, is using ions of rubidium.

This portable atomic clock must contend with factors ranging from temperature change to variations in power supply, and aging of the atomic timing package itself. Even with all of these potential disturbances, however, the AMC atomic clock will keep nearly perfect time – guaranteed to within one second in 317 years. 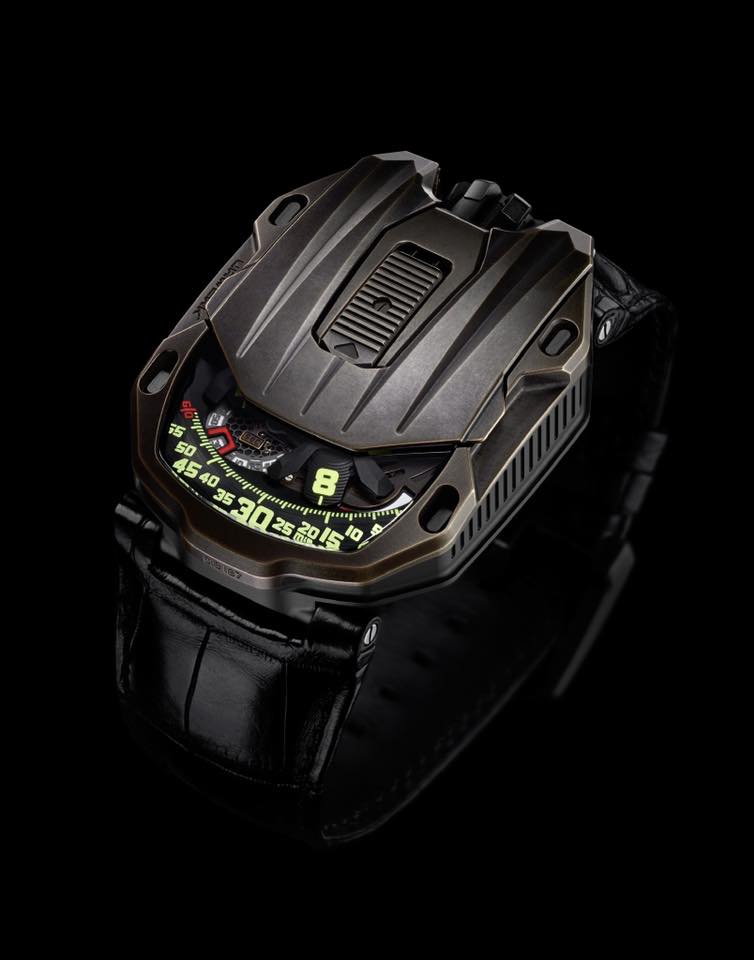 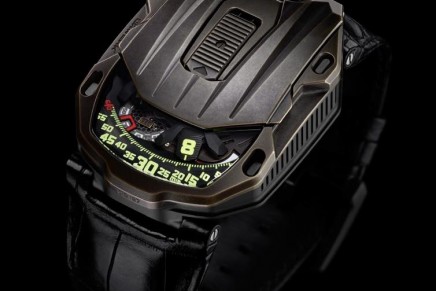 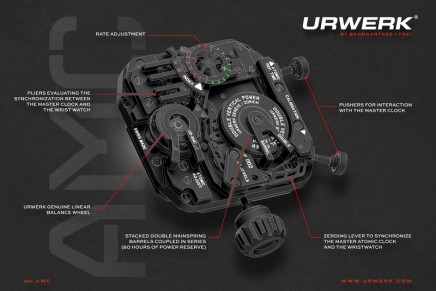 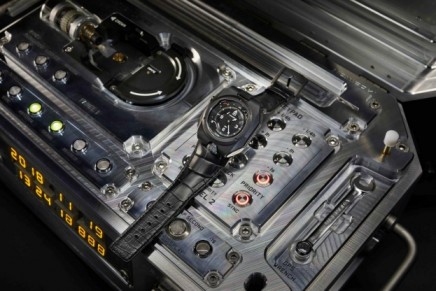 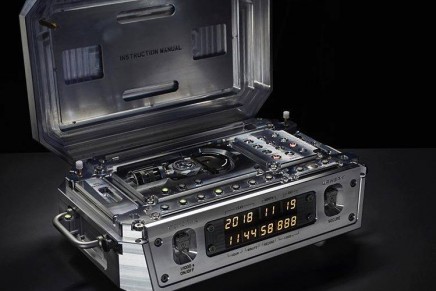