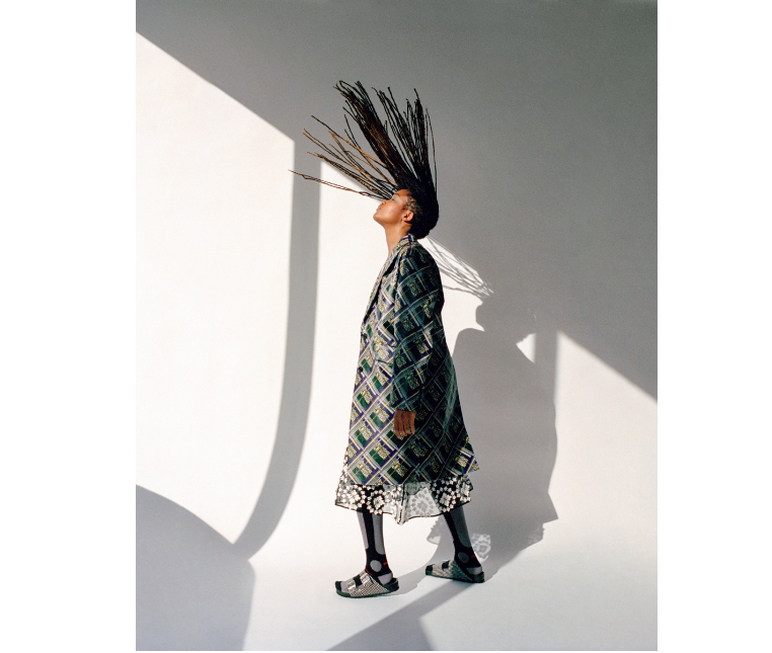 This article titled “Tyler Mitchell: the photographer who made history with Beyoncé” was written by Janelle Zara, for theguardian.com on Thursday 9th August 2018 05.00 UTC

On Monday, coinciding with the release of Vogue’s venerated September issue, the photographer Tyler Mitchell made history: two photos he’d taken of Beyoncé graced the cover of two different editions of the issue, making him the first black photographer to shoot a cover in the entirety of the magazine’s 126-year history. At age 23, he’s also the one of the youngest photographers to do so (a distinction he shares with David Bailey, who was also 23 when he shot a cover in the 60s).

The cover marked a long-overdue triumph that reverberated through social media. “An historic and stunning cover,” wrote the California senator Kamala Harris, posting her congratulations on Instagram. Mitchell himself posted a screenshot of an emotional FaceTime with his mother. On Twitter, he reported that he had “cried 3 times already this morning”.

Now based in Brooklyn, Mitchell grew up in Atlanta, where his aspirations began early: in the ninth grade, thinking himself too short to play sports, he bought a camera and taught himself how to make skate videos via YouTube tutorials (and eventually, he shot up to 6ft 2in). He came to New York to study film at NYU’s Tisch School of the Arts.

“He entered the room with a lot of grace and self-command,” his former professor Darrell Wilson recalls, describing Mitchell as “probably one of the most chic students I’ve ever had”.

Before graduating last September, he had already begun to build his body of work. In 2015, he traveled to Cuba with 30 rolls of film, and upon returning home self-published El Paquete, a catalogue of Havana’s vibrant skateboarding youth culture. He had been making music videos for indie bands like Brockhampton since freshman year, and eventually moved on to shooting campaigns for the likes of Givenchy, American Eagle and Marc Jacobs.

Mitchell did all of this unsigned. He’d post his portfolio to Instagram, and “as soon as I learned what licensing was,” he told This Generation, “I taught myself how to write contracts.”

It was his Teen Vogue digital cover on gun reform that caught the attention of Condé Nast’s corporate creative director, Raul Martinez, who initially approached Mitchell about the Beyoncé cover (to which Beyoncé quickly agreed, Business of Fashion reports. When Vogue called Mitchell to tell him the good news, he thought it was a prank.) For the Vogue project, Mitchell had photographed teenage gun reform activists from around the country, including the survivors of the shooting in Parkland, Florida. He directed a short in which they began lying on their backs in the hallway of a school, and ended with their hands raised, pleading: “You’re killing us.”

Related: ‘We are the opposite of self-absorbed’: what everyone gets wrong about Generation Z

“Y’all gotta listen to the kids,” Mitchell captioned the video on Instagram. In the grand scheme of things, however, he and those teen activists are peers; they belong to a generation of young people who have been nothing short of revolutionary. They’re self-aware, politically conscious, and fluent in the potential for social media to effect real-world change. It’s almost easy to forget how young they are.

“I thought he was around my age,” says the artist Toyin Ojih Odutola, 33, whom Mitchell shot for i-D magazine this spring. She recalls his professionalism, his openness to collaborating with her as a subject, and most of all, his empathy. “In fashion shoots like those, you need an element of yourself and not some idea that the photographer has of you,” she says. When she finally saw the photos, she thought: “Beyond this beautiful array of compositions, that’s still me – he captures that essence. And later, when I found out how old he is, I was like what?”

The continuing thread in Mitchell’s body of work is a desire to express a truth about cultural identity. In interviews, he talks of the “thingification” of the black body, its reduction in popular culture to a set of sinister and sexualized tropes, and how he, through what he calls “an honest gaze”, can dispell them.

“He’s concerned with creating more holistic images of his community, of shooting people of color, particularly black people, in a way that really gets out their humanity,” says Antwaun Sargent, co-curator of the Aperture Foundation exhibition The Way We Live Now. He describes Mitchell’s works in the show as “an exploration of youthfulness and black male beauty that renegotiates definitions of masculinity”; they depict young black men dressed in vibrant, sometimes pastel colors, sometimes wearing nail polish, shot against candy-colored backgrounds.

“I am synthesizing what I see to be a full range of expression possible for a black man in the future,” Mitchell says in his artist’s statement. This freedom of the rigid confines of prescribed masculinity manifests itself elsewhere in Mitchell’s body of work as he depicts black boys in ways that they’re rarely shown, enjoying the innocence of childhood or physical, mutual affection. An Instagram post of his captioned “Boys of Walthamstow” depicts black boys laughing as they run shirtless in a field of tall grass. In both his work and his online persona, he fully embraces the open expression of emotions; he tweets of the crippling anxiety of waiting for a text message, of having crushes, of the power of Kanye lyrics.

In Beyoncé’s piece in Vogue’s September Issue, she writes about the importance of working with Mitchell: “Until there is a mosaic of perspectives coming from different ethnicities behind the lens, we will continue to have a narrow approach and view of what the world actually looks like.” The landmark of a young man breaking a 126-year streak of exclusion is as alarming as it is momentous; it’s both a historic moment and one that leaves an open question as to what the future holds.

“We’re at the beginning of a conversation that I’m glad we’re having,” says Sargent, who is still reluctant to say that the status quo has truly changed. “The sinister part of me thinks that this might be a relevancy play [by Condé Nast], but I 100% would love for that to stand corrected. We’ll see who gets to shoot these going forward.”

“And it doesn’t always need to always be black photographers shooting black people,” he adds. “That’s not diversity – that in itself is its own type of ghettoization.”

As for Mitchell, he welcomes the future implications of his newfound stardom with open arms. “Hi if ur new here I did this unrepresented,” he tweeted. “Fully solo just manifesting dreams. Thanks for giving a fuck. Excited to keep pushing forward.”