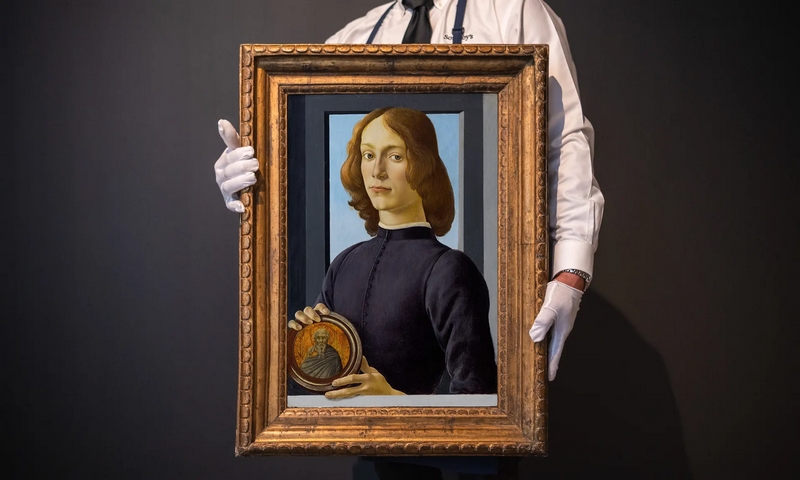 This article titled “‘True beauty for the ages’: $80m Botticelli to appear at auction” was written by Mark Brown Arts correspondent, for theguardian.com on Thursday 24th September 2020 10.40 UTC

A Sandro Botticelli portrait of a wealthy and handsome young man, described as one of the greatest Renaissance paintings remaining in private hands, is to appear at auction with an estimate of more than $80m (£63m).

Sotheby’s said it was the largest estimate for an old master painting it had ever set, a reflection of its importance and rarity.

“Our ‘Young Man’ is 550 years old, yet he looks like he could have strolled into our galleries this morning,” said George Wachter, Sotheby’s co-chairman of old master paintings. “He is a true beauty for the ages.”

Most Botticelli works are in the world’s greatest museums and only a dozen are portraits. Sotheby’s said its portrait, to be sold in New York in January, was as important as Portrait of a Man With a Medal of Cosimo il Vecchio de’ Medici in the Uffizi gallery in Florence, and Portrait of Giuliano de’ Medici at the National Gallery of Art in Washington DC.

The portrait, Young Man Holding a Roundel, is recorded as being in the collection of Lord Newborough at Caernarfon in Wales in the 1930s. It is believed to have been purchased by his ancestor Sir Thomas Wynn, the first Lord Newborough, while living in Tuscany.

It apparently hung in an anteroom unknown to the outside world, its importance unrecognised.

It was bought by a dealer who sold it to a private collector, whose heirs sold it at auction to the present owner in 1982 for £810,000.

Experts said the young man’s face embodied the ideals of Renaissance beauty, while his wavy, centre-parted long hair would have been the height of fashion.

His tunic looks modest but its dark mauve colour would have been expensive to achieve and suggests he was wealthy and upper class.

The number of Botticelli paintings in the world would have been higher had the artist not fallen under the spell of the religious zealot Girolamo Savonarola. The artist burned several of his paintings in the “bonfire of the vanities” in 1497 but not, mercifully, the Birth of Venus and Primavera, two of the world’s most famous and popular paintings.

The identity of the young man is not known although the roundel – or medallion – that he holds depicting a saint probably contains as yet uncoded clues.

The roundel is particularly interesting and unusual in that it is an original 14th-century work attributed to the Sienese painter Bartolomeo Bulgarini, which was carefully inserted into the panel on which Botticelli painted his portrait.

One suggestion has been that Botticelli was deliberately contrasting the handsome vitality of the young man with the hoariness of the ageing saint.

Over the years it has been suggested that the young man could be Giovanni de’ Medici, brother of Lorenzo who was one of Botticelli’s most important patrons.

Sotheby’s said the portrait embodied the Florentine Renaissance but was also “timelessly modern” with its bold colours and simplicity.

“This is a painting that transcends the normal boundaries of the old master genre,” said Wachter. It was “one of the best preserved, most exquisite, classical Renaissance portraits that anyone could ever wish to own.”

Christopher Apostle, head of the auction house’s old masters department in New York, said no other painter evoked the golden age of the Florentine Renaissance more powerfully than Botticelli.

“His nymphs, goddesses, Madonnas and saints populate our imagination as representatives of the rebirth of science, art, and literature in a city that laid the foundation for the modern world.

“It is in his portraits, however, that Botticelli most clearly opens a window on to the world of Renaissance Florence – never more so than in Young Man Holding a Roundel, a painting that encapsulates the intellectual, courtly and humanistic virtues that define the Italian Renaissance.”