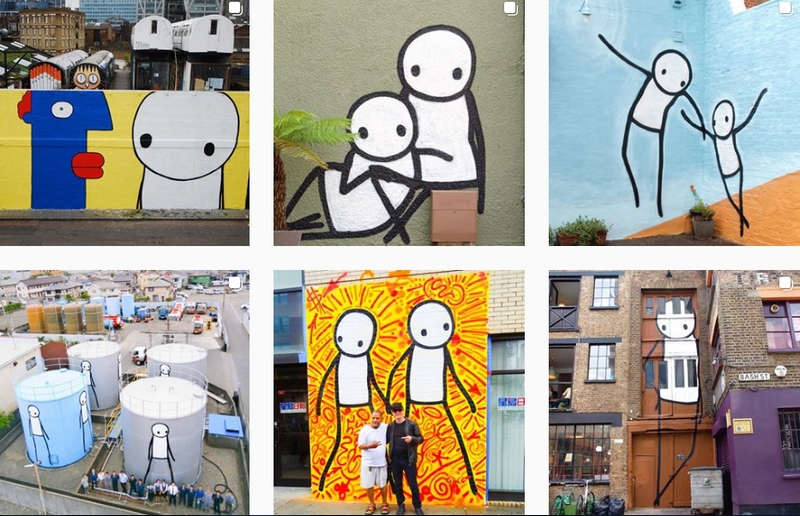 This article titled “When does street art become ‘art’ art?” was written by Jonathan Jones, for The Guardian on Tuesday 22nd September 2020 08.00 UTC

In the Guide’s weekly Solved! column, we look into a crucial pop-culture question you’ve been burning to know the answer to – and settle it, once and for all

Surely you must have your doubts. It’s all very well for the entire world to laud Banksy’s latest mural on a pigsty in Suffolk and have the savvy to rave about Stik (who does stick figures under bridges in London). It appears to be a truth universally acknowledged that street art is subversive, democratic and brilliantly creative. But then you find yourself paused on a train waiting to enter a station, looking at the “art” on a goods shed wall. Someone took risks – legal and physical – to spray-paint those giant letters and curly lines, but the results look about as inspiring as a discarded crisp packet.

Perhaps it is merely money that turns some of this unimpressive stuff into that elevated thing called “street art”. Banksy is not just famous, but famous for being highly priced. When he arranged for one of his pieces to destroy itself at an art auction, many people assumed the stunt was intended to enhance his market value still further. Finding a Banksy stencilled on your house is like winning the lottery. If art is defined by value – and in the age of Damien Hirst who’s to say it isn’t? – that splat on the side of the Co-op deserves the respect due a potential million-quid investment.

Related: The Guide: Staying In – sign up for our home entertainment tips

“Street art” is a novel market category, devised with Banksy and his imitators in mind. Yet the urge behind it has been around for at least 60,000 years. Human beings just love drawing on walls. In the ice age, people pressed their hands against cave walls and spat ochre pigment to create a red outline. Pretty much the same technique is used today when street artists spray paint over a pre-cut stencil to leave a quick image before the police come.

It may seem irreverent to class ice-age art as graffiti, but before the true antiquity of such art was recognised in the 20th century, people who came across mammoths drawn in caves did actually dismiss them as crude graffiti. And there is no written evidence to prove who made cave paintings or why. Children as well as women and men left handprints in caves. Maybe it was surly stone-age teenagers who skulked underground drawing bison for a bit of a laugh.

So perhaps street art is not only art, but the purest art around. The ancient Roman authority Pliny the Elder and the Renaissance writer Giorgio Vasari both thought the first artist was a woman who traced a shadow on a wall. The modern art theorist Dubuffet took creativity back to its roots when he coined the term Art Brut, “raw art”, for marginalised marks including graffiti. Art in the 21st century is technocratic and sophisticated; we have video art, conceptual art, digital art. None of these non-manual genres have much to do with a kid scratching a picture with a stick. But street art mystically returns to the primal urge to make a mark on a blank surface.

So give those doodles by the railway a second look. It isn’t just an invention of the art market or media that street art is something special. It is a connection with our deepest creative roots: a connection that may be broken and intermittent, like a signal struggling through the white noise of modern life, but a signal from the ice age all the same. “Here I am. This is my mark. I’m human.”