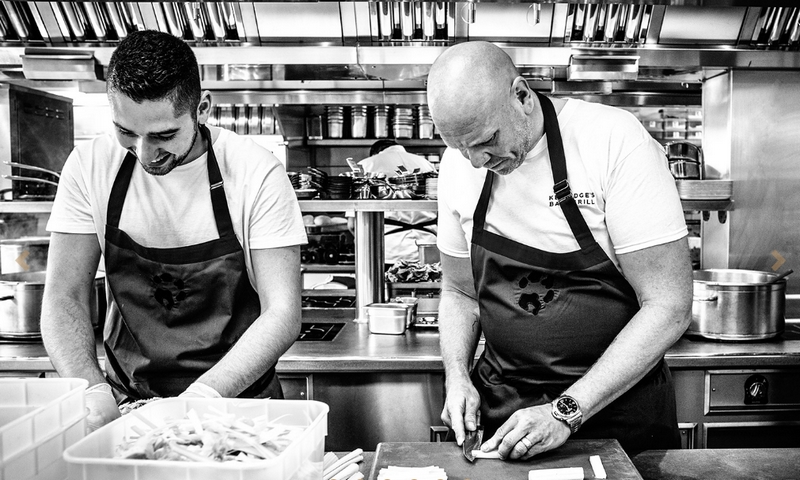 This article titled “Top chefs back Tom Kerridge for calling no-show diners ‘disgraceful'” was written by Sarah Marsh, for The Guardian on Wednesday 15th July 2020 05.00 UTC

Top chefs have rallied behind Tom Kerridge after he criticised “selfish” and “disgraceful” customers for failing to show up and honour their reservations.

They also raised concerns about the high costs of landlord rents, which they still have to pay despite operating at half capacity, and the risks associated with a lack of custom.

Over the weekend, Kerridge criticised 27 people who did not turn up at the Corinthia Hotel in central London without letting the restaurant know. In an interview with the Guardian, Kerridge said: “There has been a huge response from the industry around no shows. It happens all the time but quite often people accept it or don’t talk about it.”

He added: “It’s not just about me, it’s about the people’s jobs who we employ and small independent restaurants, so the industry has been supportive and pleased that I highlighted it.” Kerridge said that he will probably introduce a cancellation policy at the London venue.

Michelin star chef Tom Aikens, who has a 25-diner restaurant in London’s Belgravia called Muse, said he was not opening until September but usually asked for deposits that would cover the price of the menu. He said: “I don’t know why people think it’s OK not to cancel, it is like going to friends’ dinner party and then deciding on the night not to go. It would be rude to not even phone to explain, so why would you do that to chefs and restaurateurs?”

He added: “It is even more problematic because of social distancing, as lots of restaurants have had to remove 50% or more of their tables because of the 1-metre ruling.”

“I think the one big thing for many restaurants is paying rent – it’s a big number for a lot of people and they need continued help with that while we go through the next six to nine or 12 months. Having customers that feel safe and want to come to restaurants regularly is going to take some time, it really is. I am not sure of when we will see restaurants full again.”

Two Michelin-starred restaurateur Raymond Blanc said he was preparing to open Le Manoir aux Quat’Saisons and due to social distancing guidelines there were a limited number of tables. “As an ongoing policy, we take card details at the time of booking and explain to our guests that should their plans need to change, we ask that they kindly advise us in advance. We explain that changes to bookings can of course be made should they wish, however, if they fail to arrive without notice, a charge will be made to their card.”

He added: “We are all working so very hard to ensure we keep our guests and our staff safe and it saddens me greatly to hear that as the hospitality re-opens its doors again so many people are just not turning up. We fully understand that people might be apprehensive, but if you are worried just be kind enough to let us know of your change of mind.”

James Golding, head chef at The Pig in Dorset, said they had quite a few cancellations but were making it back through walk-ins. “I suppose if we did not have those walk-ins then we would be in a different situation. We also find that because we have a lot of open space … If you do come in and are not comfortable in the restaurant we can say go outside and order a lighter lunch option and go where you want to go.”

Kerridge said that restarting the industry would be very difficult, especially for London-based restaurants. “There is not the travel and tourism there, the whole of London is relatively quiet… Marlow, where my other restaurant is, there is still a vibrancy about it and numbers booking there are relatively strong.”

He added: “I have concerns about the whole economic situation we are facing – we are heading towards a global recession rapidly and I worry that when furlough ends many sectors will be affected by redundancies. Right now people are being paid by the government essentially and when that finishes, the month after that has finished, many businesses have to have earnt enough money to pay wage bills.”

“I am of course worried about the hospitality industry as that is my industry but there is a bigger picture here, we are all heading to some form of economic slowdown. I am fearful it will be a rapid halt and then we have got the really lovely pressing engagement of Brexit to try and deal with.”