Sophistication and robustness. Elegance and performance. Poetry and precision.
Basel gets ready for Baselworld 2014. 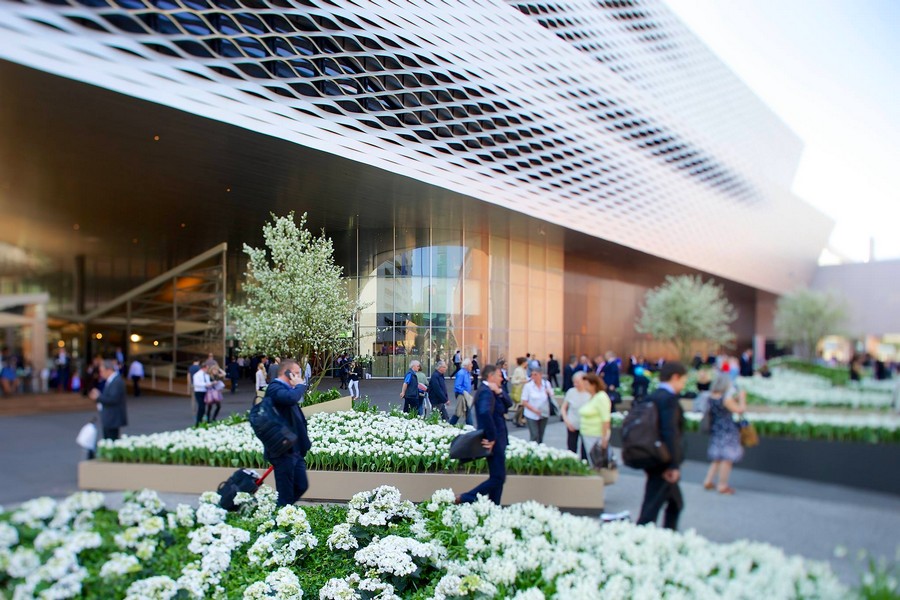 Only 1 day left until Baselworld – The Watch and Jewellery Show, opens its doors in Basel, Switzerland. The trade fair invites us to contemplate intricate mechanisms, jewels of the world, haute joaillerie, the finest examples of craftsmanship, and the legacy of one hundred years of watchmaking tradition. Baselworld has something for everyone: watches for inveterate travellers, sport souls, for collectors and admirers of rare mechanisms, fashion victims, wild and urban explorers. Take a look at some of the sophisticated, and stylish watches to be presented at Baselworld 2014.To be perfectly prepared don’t forget to download the new 2014 Baselworld App for iOS, Android and BlackBerry. 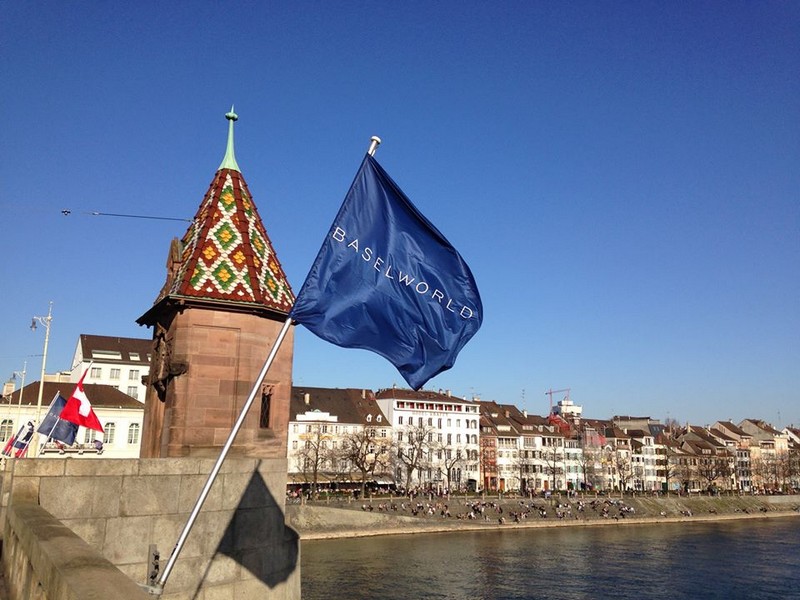 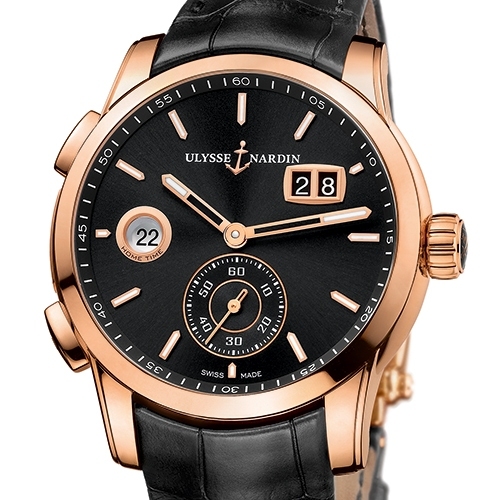 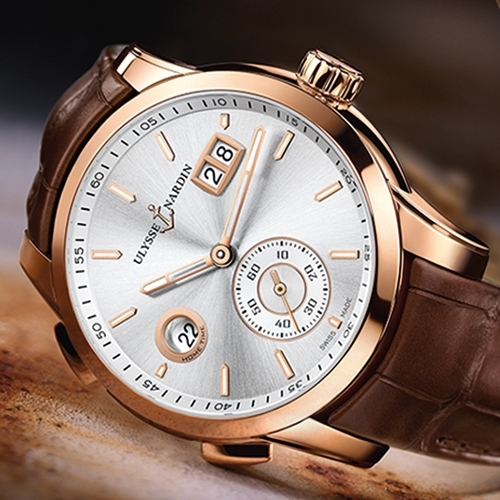 ULYSSE NARDIN Dual Time Manufacture watch returns with an automatic movement
The Dual Time Manufacture set a milestone in contemporary watchmaking when launched, as the first watch whose second time zone could be adjusted both forwards and backwards. Now this legendary timepiece returns with an automatic movement that is designed and produced entirely in-house: the UN-334 calibre. Featuring a large date, which can also be adjusted in both directions, it comes equipped with a silicon escapement, the height of watchmaking technology and something very few brands master. Offering exceptional precision, the Dual Time Manufacture also stands out for its simplicity of use and legible display. While home time is measured over 24 hours in a window at 9 o’clock, the hour hand can be moved forwards or back to align with local time, without having to take the watch off or interrupt its smooth running. In a final flourish, the date automatically synchronises with adjustments in either direction. 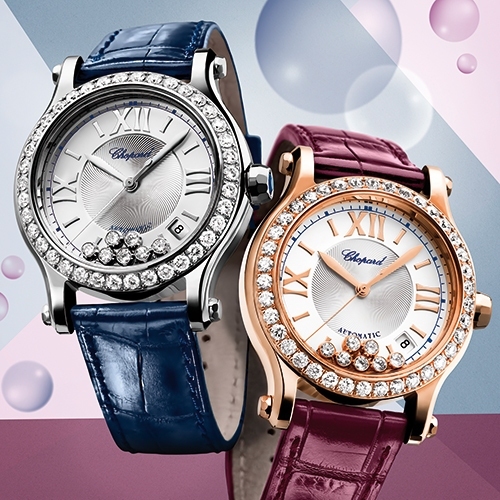 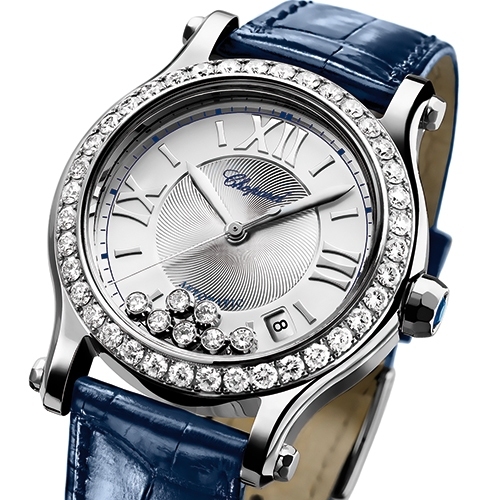 CHOPARD Happy Sport Medium Automatic watch – the mesmerising charm of the famous moving diamonds
The Happy Sport line created by Caroline Scheufele celebrated its 20th anniversary in 2013. To mark this event, Chopard unveiled the new Happy Sport Medium Automatic. One of the most fascinating jewellery innovations in recent decades is thus further enhanced by an unprecedented mechanical dimension. On the dial side, an elegant guilloché motif provides an ideal playground for the playful diamonds, while the sapphire caseback affords a chance to admire the finely decorated
automatic movement graced with straight Côtes de Genève. 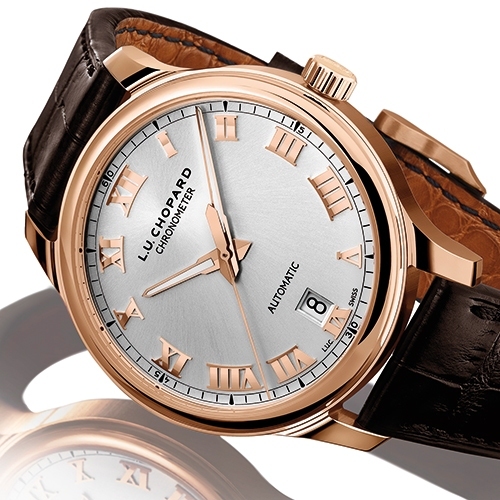 CHOPARD L.U.C 1937 Classic watch – a mechanical tribute to the horological heritage of the House.
This timepiece firmly anchored in the tradition of classic, timeless watches, now returns in an 18K rose gold version with a satin-brushed silver-tone dial. At the heart of the case that has been subtly redesigned and refined while remaining true to the original spirit, beats the Chopard Manufacture L.U.C 01.01-L calibre, a high-performing mechanical gem chronometer-certified by the COSC. 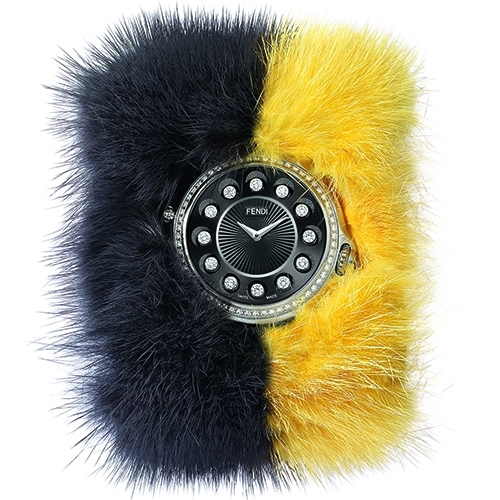 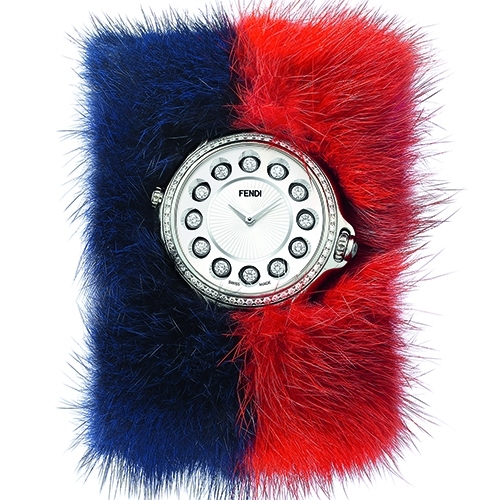 FENDI TIMEPIECES Crazy Carats fur watches
Fendi takes fur towards peaks that have not been explored for almost a century. Bearing testimony to this longstanding tradition, the new Crazy Carats watch is fitted with a precious strap in two-tone mink, while the watch itself features a number of sparkling surprises. A turn of the crown reveals three different types of gemstones according to the mood of the moment. White diamonds or blue or pink sapphires alternately light up this luxurious composition, underscored by fascinating gemsetting on the bezel. The mysterious and enchanting Crazy Carats comes in four different versions, each available in a 50-piece limited series. 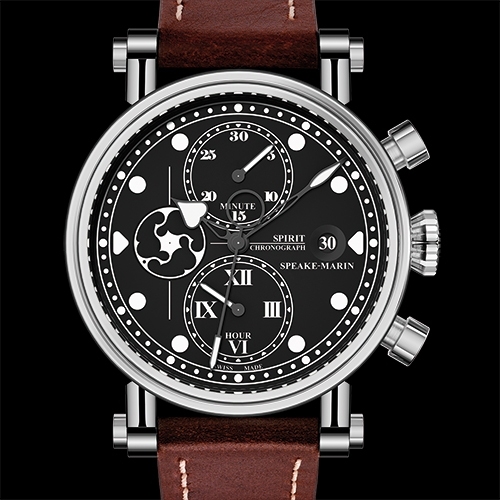 Having made minute repeaters, perpetual calendars, tourbillons and other horological sleights of hand, the most British of Swiss watchmakers presents his first chronograph, Spirit Seafire, a name inspired by another first: the Supermarine Seafire which was the British Royal Navy’s first carrier-based airplane. Remarkably distinctive, this masterful composition is set in a new Piccadilly case in titanium. Superbly staged against a mat black dial, the three-dimensional
indications feature white Super-LumiNova applications which glow green in the dark for excellent legibility. Roman numerals on the hour counter at 6 o’clock are a rarely-seen detail. Small seconds at 9 o’clock take the form of Speake- Marin’s signature “topping tool” logo. 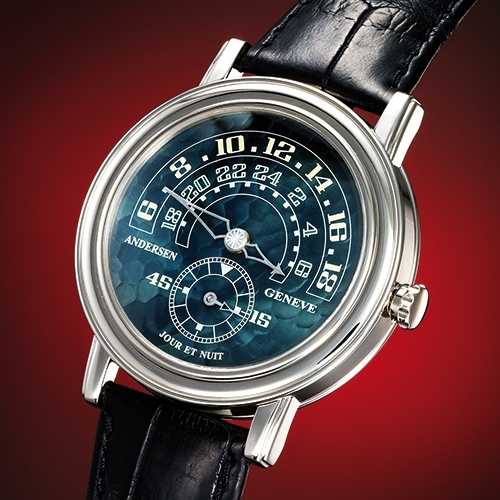 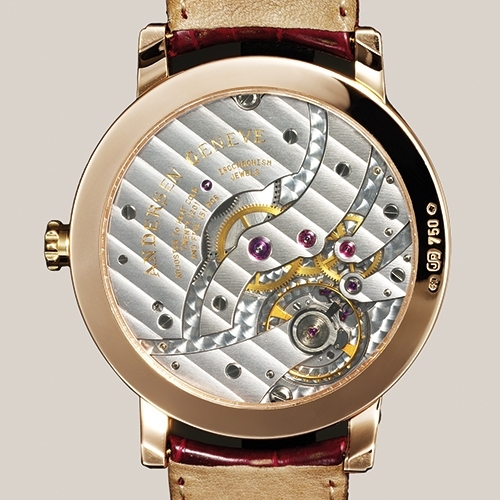 ANDERSEN GENEVE Grande Jour & Nuit Edition 2014 watch in limited-edition – rare mechanisms that bring to life equally rare displays.
For this new Grande Jour & Nuit, indications have been transferred, highly legibly, on the dial with daytime hours (6am to 6pm) and night-time hours (6pm to 6am), in addition to a small minutes dial. The long tip of the central hand points to daytime hours while the shorter end indicates night-time hours. It jumps when the small minute hand has made one complete revolution of the dial. Production of the Frédéric Piguet movement having ceased, Andersen Genève proposes a
limited series of 50 watches – 30 in red gold and 20 in white gold – each equipped with this now rare mechanism.
ENICAR Versailles CH325 Chronometer watch – inspired by the gardens at the renowned French château
On this jewel of sophistication, each element is composed with exquisite art. The centre of the dial is adorned with a delicate motif while ten sparkling diamonds denote the hours around its circumference. The bezel, which is crafted from 18K rose gold, cradles the 96 diamonds that illuminate the whole, interspersed with eight other precious stones to create a fascinating effect. Precious and unique in each of its facets, the Versailles watch is brought to life by a COSC-certified automatic chronometer movement. An interchangeable bracelet adapts to different moods, with two-tone 18K rose gold / 316 L steel or leather. 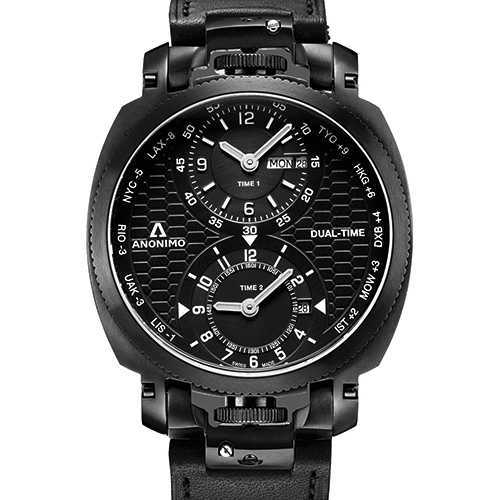 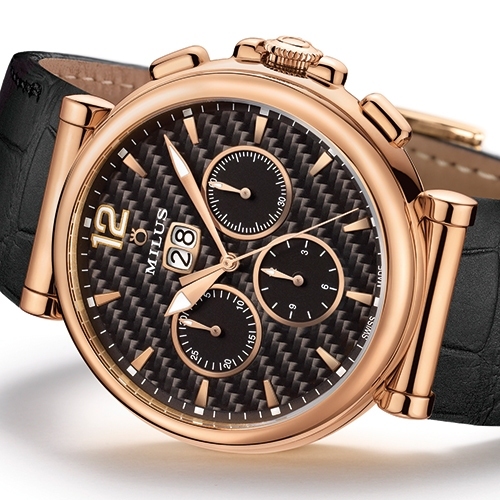 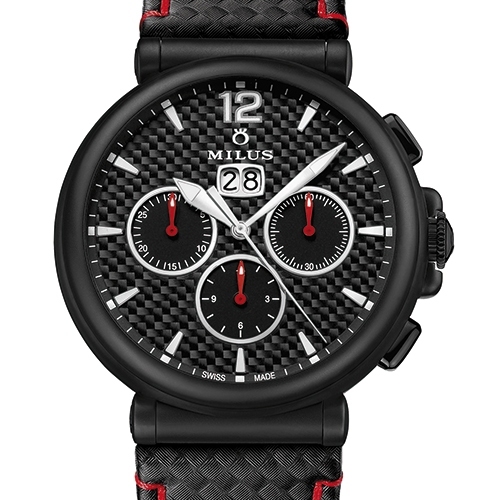 MILUS Zetios Chronograph – the ultimate sport-chic watch
Milus delivers its rendition of a classic chrono in the form of a truly unique design. Straight lugs offer an elegant contrast to the rounded case, while the carbon dial welcomes a generous large date above the counters. The delicately fluted crown ensures remarkable ease of use, as well as being secured against knocks by the subtly cambered lateral protections. 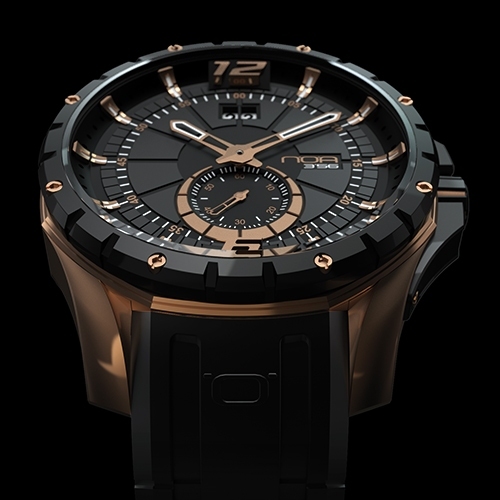 N.O.A Skandar watch – the essence of modern-day heroes to distil a unique vision of time.
Its powerful colour plays accentuate the iconic three-dimensional N.O.A design, while the powerful architecture of the case suggests the undeniable force exuded by these models. 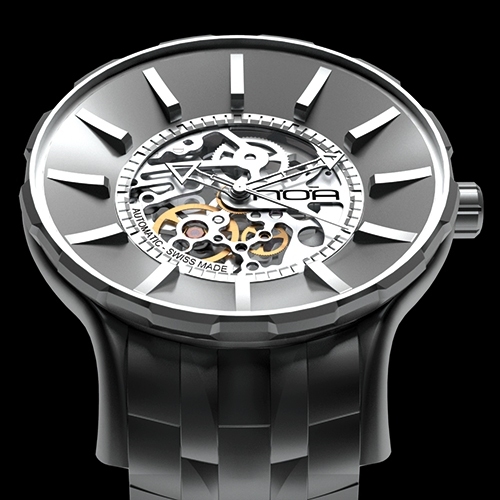 N.O.A Steel Skell watch – the mechanics of time exposed
This automatic calibre with its highly architectural skeleton-working features colourful elements that further highlight the three-dimensional N.O.A signature. A wealth of subtle depth and transparency effects ensure that nothing is hidden and that each second becomes truly unique. 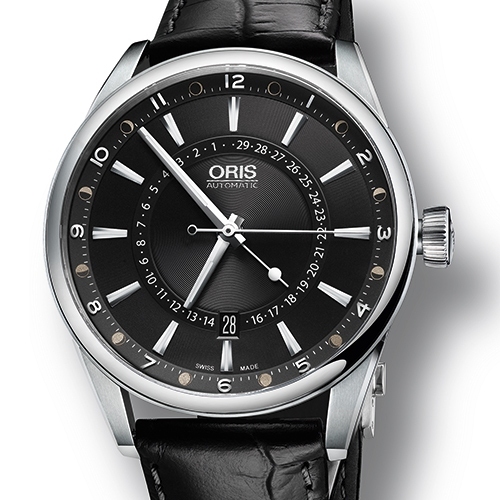 Oris Artix Pointer Moon watch – a specially redesigned dial featuring subtle plays on the structure of its two discs.
Oris adds a new model to its Artix collection: the Artix Pointer Moon. At its heart beats the 761 calibre developed in- house on a Sellita base movement. Its secret lies in the fact that it drives, in addition to the date, a moon-phase display indicated not on a classic counter but instead by a hand pointing to the various cycles on the inner bezel ring.

The hand moves forward every 12 hours, thus keeping remarkably accurate track of the positions of the earth’s satellite, unlike more traditional “romantic” moon-phase displays. To ensure perfect readability by moonlight, the hands and hour- markers are naturally luminescent. 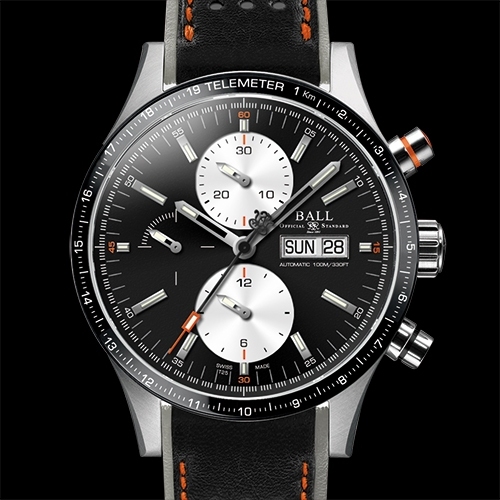 BALL WATCH Fireman Storm Chaser Pro watch – a professional tool watch to satisfy the demands of storm chasers
The Fireman Storm Chaser Pro combines the high-performance services of a chronograph and a telemeter. To determine the distance between an observer and the point of lightning impact, the user starts the chrono as soon as lightning is seen and stops it when thunder is heard. The seconds hand then shows the distance, in kilometres, on the telemetric scale.

Like all Ball watches, luminosity and legibility are central to the Fireman Storm Chaser Pro, whose hour-markers and hands are fitted with luminescent micro-tubes containing H3 gas. This technology has no need for an external source of light or energy, and is up to 100 times more effective than conventional luminescent coatings. Ball Watch’s ambassador is Dr Joshua Wurman, the most eminent specialist in storm chasing.