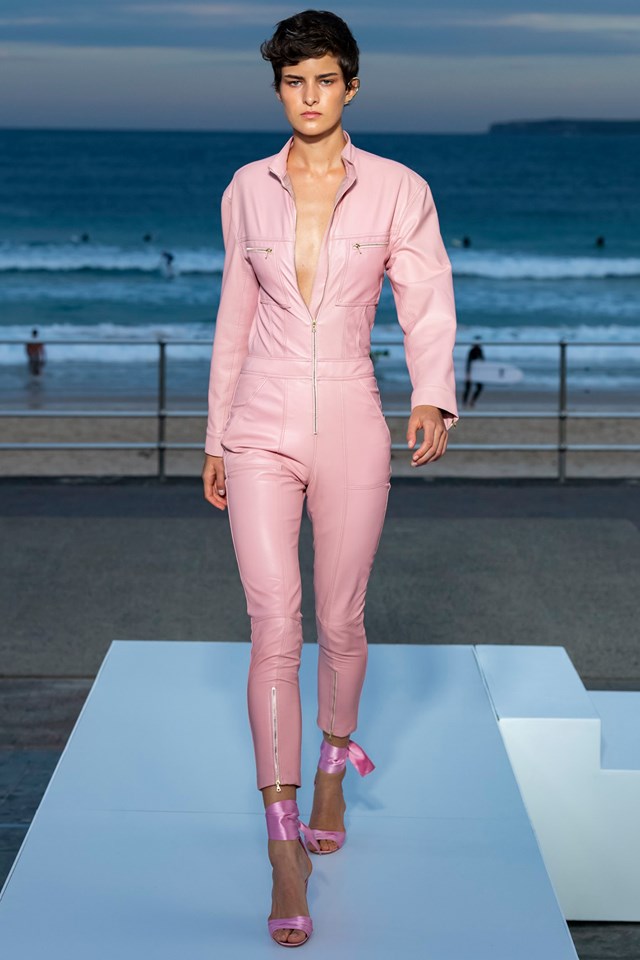 This article titled “The top 10 shows from Australian fashion week – in pictures” was written by Alexandra Spring and Carly Earl, for theguardian.com on Saturday 18th May 2019 22.57 UTC

Controversial shows are as de rigeur at Australian fashion week as editors in ridiculous heels. Think rats on the catwalk, pythons paired with diamond encrusted bikinis and bloggers playing the piano. With its cheesy dancers, lengthy delays and questionable seating arrangements, this year’s contender Jonathan Cassin didn’t get the memo to keep the focus on the clothes but it made for good headlines among all the election 2019 coverage.

Still, beyond the madness, there were plenty of covetable, wearable clothes on show during this year’s resortwear collections. Here are 10 of our favourite shows.

At this year’s opening show Aje (above) paid an elegant tribute to Australiana, albeit more classy than kitsch. Wattle and gum leaves appeared on voluminous skirts and dresses, alongside relaxed separates in eucalyptus green, burnt red and frothy white.

Bomber jackets, bike shorts and croptops were mixed in with a new denim line from activewear range PE Nation before designers Pip Edwards and Claire Tregoning literally made it rain on swimwear-clad models to announce their upcoming collaboration with Speedo.

Each year fashion week organisers ship in a foreign designer to internationalise the Australian collections. This year, it was LA-based designer Jonathan Simkhai’s turn as he debuted his new collection (below) at North Bondi Surf Life Saving Club. Yet this was no last-minute drop-in: with his glamorous leather pieces, tuxedo dresses and billowing evening dresses the designer took inspiration from his so-Sydney surrounds and the colours of the sun setting over Bondi beach.

If there is one thing that Australian designers excel at, it’s swimsuits and this year luxury swim and resortwear brand Bondi Born (below left) provided a masterclass for its debut show. Tailored and sophisticated yet ultra flattering shapes, the collection was filled with shades of burnt orange, khaki, navy and baby pink.

Bassike (above right) is one of Australia’s most successful labels, beloved both locally and abroad for their relaxed but elegant wardrobe staples. Not usually seen on the runway, this year the designers send out a colourful but tightly edited collection of easy daywear dresses, relaxed pants with tailored tops and flattering swimwear which are sure to top many summer shopping lists.

Inspired by Katharine Hepburn, Anna Quan (below) sent out an infinitely wearable collection of shirt dresses, knitwear and tailored short suits in shades of taupe, chocolate, caramel and yellow. that left editors and buyers cooing – and compiling their wishlists.

There are some fashion labels that just get what women actually want to wear. Lee Mathews (above) has held that mantle for 20 years and, to celebrate the milestone, the designers sent out a collection inspired by the archives but forward looking. Structured jackets paired with relaxed shorts were mixed with floaty feminine dresses, in a glamorous pallet of pink, white and black.

As a venue, Sydney’s Carriageworks is pretty failsafe, so it’s a big call to take guests offsite. This year Double Rainbouu (above) gambled – and won when they presented their collection at Sydney’s peaceful Chinese gardens. And instead of making the models do the marching, guests ambled through the gardens, stopping at mini tableaus of Zen-ed out young things wearing colourful slouchy shirts, shorts and linen wear.

When Julie Bishop pushes pause on politics during such a hotly contested campaign for a fashion show, you know it’s serious. The outgoing MP – and best-dressed-politician – was in the front row for Carla Zampatti’s show (above), alongside the NSW premier, Gladys Berejiklian, and the ABC chair, Ita Buttrose. Accompanied by the Australian Brandenberg orchestra, models showed off sharply tailored daywear and glamorous evening wear, demonstrating why the veteran designer is still the queen of Australian fashion after more than 50 years in business.

The show that gathered the most praise – and a personal favourite – was Matteau (below). Making their fashion week debut, stylish sisters Peta Heinsen and Ilona Hamer sent out a simple but stylish collection of billowing dresses, silk shirts and tailored swimwear that everyone from Palm Beach to Palm Springs is certain to snap up.