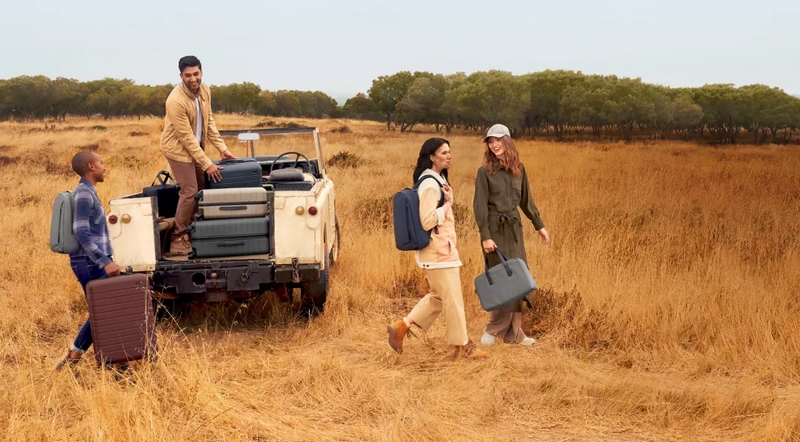 This article titled “LV carry-on luggage? No thanks, we’re going normcore, say stars” was written by Leah Harper, for theguardian.com on Saturday 18th May 2019 18.15 UTC

As the warm weather approaches and bite-size travel breaks are reported to be on the rise, airport fashion is given as much consideration as what to wear to the beach. This summer, however, it’s all about accessories, specifically, the status suitcase.

For decades, Louis Vuitton have been the go-to for upmarket “it” cases, trailed by everyone from David Beckham to Catherine Deneuve. However, a new breed of more affordable, less showy luggage that will fit in overhead lockers is coming to the fore. Brands including Rimowa, Tumi and Away have been gaining traction – with the latter now valued at $1.4bn, (£1.1bn) up from a $700m venture-capital valuation last year. The company reached $150m in sales in 2018 – a number that is reported to double in 2019.

Away recently made headlines when it was reported that Meghan, the Duchess of Sussex, had given its suitcases as gifts to the 17 guests at her baby shower in February. The brand is best-known for focusing on practicality; it’s suitcases often feature a built-in battery to charge devices, and laundry bags. They’re also cheaper: Away’s Carry-On costs around a tenth of the equivalent size Horizon 55 bag from Louis Vuitton.

The increase in brand value could also be attributed to the surge in popularity that carry-on cases have experienced. Away reported that last year 70% of UK suitcase sales are now carry-on size. Low-cost airline Ryanair has further tightened luggage restrictions since November 2018, no longer allowing non-priority passengers to take small 10kg cases onboard for free. This has prompted many to seek out alternatives that fit the “one small bag” size stipulations.

These cases also look the part, featuring hard shell exteriors in a variety of millennial-friendly colours, with ridged detailing. Their lightweight aluminium options are the opposite of the majority of overtly branded cases sold by Christian Dior, Fendi and Gucci, as well as Louis Vuitton.

Grazia’s fashion news and features editor, Laura Antonia Jordan, notes the Instagrammability of the new generation of suitcases. “The rise of the status suitcase is related to the access-all-areas nature of social media,” she says. “Investing in holiday purchases is aspirational, indicative of a whole frequent-flyer lifestyle.”

The practical perks of these cases also tap into an ongoing tilt towards “practical fashion”, which has seen hiking boots, puffer jackets and utility dressing feature prominently on the catwalk and high street. While old-fashioned Globetrotter cases still hold an aesthetic appeal, they do not include the same wealth of functional features. Jordan agrees that the sensible suitcase has become a point of pride; a way for jetsetters to stay chic.

“Whereas transit/holiday looks once offered a welcome chance to opt out of ‘fashion’ for a couple of weeks, now – if you really want – you can show off your trophy buys 365 days a year,” she says.

Away co-founder Jen Rubio acknowledges the importance of brand identity for those purchasing even the most functional of travel items.

“So much of what consumers today are looking for is a connection with the brand,” she says. “They’re placing almost-human expectations on the companies they interact with. If they just wanted a product, they’d buy it on Amazon.”

Related: How to pack the perfect hand-luggage holiday wardrobe

What this current crop of cases lack in heritage credentials, they have made up for in fashion collaborations. Rimowa’s past collaborators have included streetwear brands Supreme and Anti Social Social Club, as well as Virgil Abloh’s Off-White. Away has previously partnered with models Suki Waterhouse and Karlie Kloss.

Despite the non-luxury price tag, this new brand of status suitcase is a hit with celebrities: Elle Fanning, Cara Delevigne and Julianne Moore have all been photographed with Rimowa cases, while Away has been adopted by Mandy Moore, Margot Robbie and Jessica Alba. Justin and Hailey Bieber, meanwhile, prefer Tumi . Influencers have even taken to tagging their “it” bags on social media the way they nod to wearing certain designers.

The suitcase is now a fashion badge of honour, and the choice of brand matters.