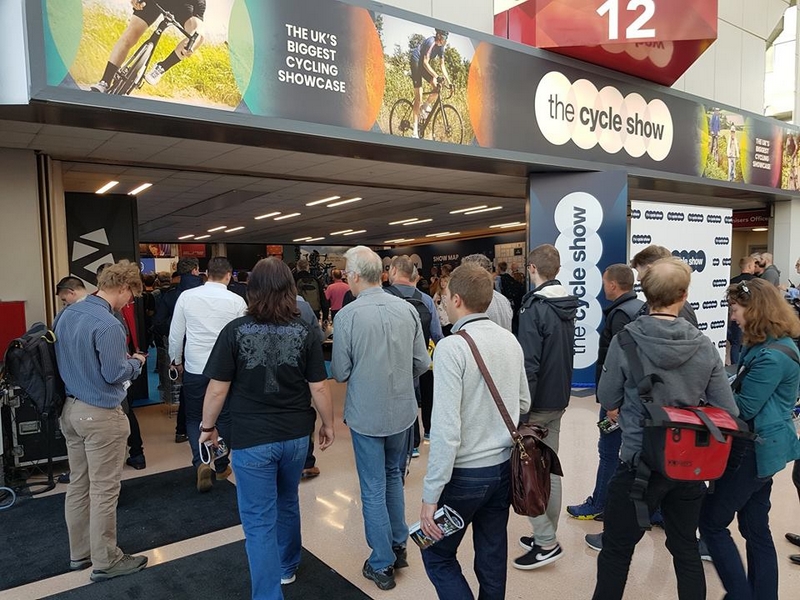 The country’s biggest and best bike show comes of age in September as the Cycle Show celebrates its 18th birthday. Whether you’ve been inspired by the heroics of the Tour de France or just want to reacquaint yourself with the life-enhancing joys of getting back on two wheels, you’ll find much to entertain, enthrall and tempt you at the event. More than 30,000 visitors are expected to spend time browsing the stands of more than 200 exhibitors displaying over 500 different state-of-the-art cycling and sports brands. The show enables you to compare hundreds of bikes from some of the industry’s leading brands, test ride new models, speak to brand experts, buy must-have accessories and get help, advice and inspiration from professional riders and cycling legends.

The Road Test Track returns to the show giving you the chance to try some of the latest road bikes on a 2km tarmac route around the NEC campus. Maybe the Ribble Endurance SLe will catch your eye. It’s one of the lightest ebikes in the world and weighs just 11kg. It’s also made entirely in the UK. Further highlights include the Tour de France-winning Pinarello bikes used by Team Ineos riders Egan Bernal and Geraint Thomas for their historic first and second places on the podium in Paris. Other brands showcasing their new products include: Colnago, Cannondale, Focus, Campagnolo, Rose, Swift Carbon, Condor, Orange, Transition, Mondraker, Yeti, Pivot, Surly, Kinesis, Marin, Genesis, GT, Salsa, Brompton, GoCycle, Riese and Muller, Tern, Ridgeback and Corratec.

Reflecting the growing popularity of commuting, the show will have a broad choice of foldable, hybrid and ebikes to compare and test ride. Advice will also be on offer on set-up, finance and insurance.

In addition to the exciting brand launches there’s a stellar cast of guest speakers, including former Team Sky rider Philip Deignan, who will be interviewed by Simon Brotherton about his riding and broadcasting career, and Tracey Moseley, four-time world champion mountain biker in downhill and enduro.

Fresh from the last stage of the Tour of Britain and their final ever race, select members from Team Madison Genesis and team manager Roger Hammond will reminisce about past glories, lessons learned and life in the domestic peloton.

Further guests from the world of cycling include former one-hour world record holder, Graeme Obree, subject of the film the Flying Scotsman with Jonny Lee Miller, Michael Broadwith, who broke the cycling record from Land’s End to John O’Groats, and mountain biking legend and YouTube star, with over 30m views for his Road Bike Party videos, Martyn Ashton.

Ashleigh Moolman-Pasio joins the show just a week before racing in the mixed team time trial at the UCI Road World Championships in Yorkshire. The World Championships return to the UK after Goodwood last hosted them here in 1982, and Ashleigh will be sharing her hopes for winning the rainbow jersey in the time trial and the women’s race in the sport’s biggest annual event.

The Retail Hub is 20% bigger than last year and offers the opportunity for visitors to buy accessories, nutritional products and fresh new kit. With show-only offers on many products, it’s an ideal opportunity to grab a bargain on the newest equipment on the market.

From novices to regular riders, all attendees will have access to expert advice from professionals across all sectors at the Komoot Advice Stage, including bike maintenance, nutritional advice, how to join a local club, how to create and follow more effective and customised training plans, and much more.

For adventure-seekers, the show hosts a wide range of destinations, hotels and travel brands offering tours, training weekends, trails and cycling routes in locations across Europe and further afield, including India, Nepal and Cuba.

The Cycle Show has also organised hours of fun for kids, too, with the new Pump Track and the Kids Track available for young riders to try out bikes.

Fitted with hydrophobic and oleophobic lenses, which repel dirt and water, as well as frontal air vents that prevent fogging, Bollé’s Shifter sunglasses are perfect for all weather and riding conditions. They also boast Bollé’s Phantom technology, which combines photochromic lenses to change shade depending on the brightness of your surroundings, with a high contrast filter and NXT lens material to create a really clear image. Anti-fog, dirt free, water repelling, photochromatic… these sunglasses are as cool as they are smart. Shifter sunglasses £120, bolle.com