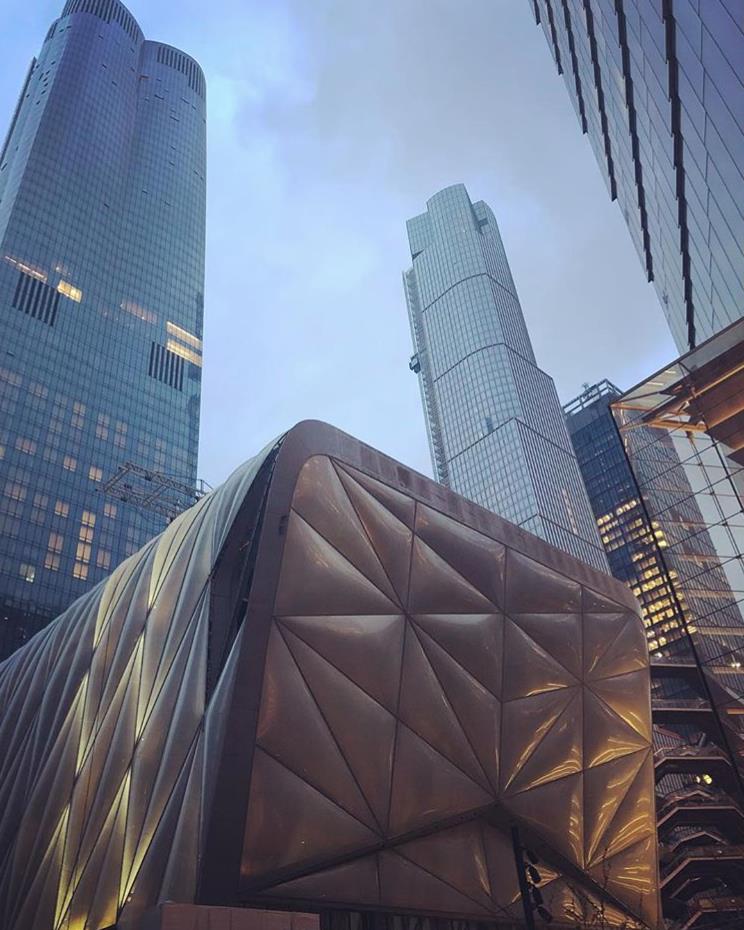 The Shed, shining in the heart of Hudson Yards NYC; @hudsonyardsnewyork.com/discover/shed

This article titled “The $500m Shed: inside New York’s quilted handbag on wheels” was written by Oliver Wainwright, for The Guardian on Friday 5th April 2019 13.13 UTC

It seems fitting that the cultural centre of New York’s latest luxury private development should look like a quilted Chanel handbag. Rearing up at the northern end of the High Line on Manhattan’s reborn West Side, the Shed presents a 10-storey wrapping of puffed-up diamond cushions to passersby, standing as the gaudy gateway to Hudson Yards – the most expensive real estate project in US history.

While it might fit in with the gilt-edged world of Swiss watch boutiques and Michelin-starred chefs that awaits in this $25bn private enclave, it is an unlikely costume for what the project’s architect and originator, Liz Diller, insists is “simply a piece of infrastructure” to support whatever artists want to do. “It’s not precious,” she says of the $500m building. “It’s muscular and industrial, just meat and bones.”

All hope has been vested in the Shed as the one redeeming feature of Hudson Yards, a project roundly condemned as the ultimate fruition of disaster capitalism. Floating on a 28-acre magic carpet over the train tracks, it is a place where glistening towers of $30m apartments rise above a vast shopping mall of luxury brands – a millionaire’s playground that, by some estimates, has benefited from almost $6bn in public funding and tax breaks.

Within this bloated commercial citadel, the Shed has been billed as the one truly public element, standing on a slice of city-owned land and mostly funded by private philanthropy. Its director, Alex Poots, formerly of the Manchester international festival, said its publicness was the very thing that attracted him to move there.

“I’ve never known a venue where you can just wander into the main hall off the street,” he says, standing in the gaping 37-metre high space enveloped by the quilted shell. “My motivation is to break down the barriers between so-called high and low culture, and this is the perfect flexible toolkit to do that.”

The Shed has strange origins, evolving without a client and with no real brief. The idea emerged in 2008, when New York City put out a request for proposals for the site, keen for some kind of cultural attraction to complement the bland vision of shops, offices and flats. “It was the height of the recession,” says Diller, “so we proposed something totally improbable.”

Working with theatre designer David Rockwell, her practice, Diller Scofidio + Renfro, concocted a radical plan. There would be a stack of flexible floors for galleries and performances that would be covered with a telescopic contraption of four nesting shells that could extend at the touch of a button to enclose a much larger semi-outdoor space. It was inspired by Cedric Price’s Fun Palace, a dreamy 1960s idea for a plug-in, endlessly evolving arts complex (which partly informed the Pompidou Centre), and a desire to anticipate the future of whatever forms art might take.

The problem was it had to be squeezed into the profit-led plans of Related Companies and Oxford Properties Group, the developers of Hudson Yards, who deemed that a big moving shed would get in the way of people seeing their mall. So the site was shrunk, flipped 90 degrees into the back corner of the site, and plugged into the base of one of their luxury apartment towers, while the four shells were reduced to one. “It’s our deal with the devil,” Diller told me in 2017. “It allows us to get extra back-of-house space.”

Visiting the finished building, it looks like the devil did rather better out of the deal. From the layout to the quality of construction, the Shed feels like a painful compromise. For a start, its entrances are perfunctory, tucked out of the way down at street level, rather than enjoying a frontage on to the main plaza, which is now occupied instead by Thomas Heatherwick’s colossal Vessel sculpture – a $200m stack of staircases with pieces that seem to be held together with little more than duct tape.

Once you’ve found your way inside the Shed, shuffled unceremoniously through an undercroft beneath the High Line, you ascend a distinctly mall-like sequence of escalators to reach the three principal levels of galleries, which themselves feel like an extension of the spec office block next door, with plasterboard walls, suspended ceilings, and already cracked concrete floors.

It is clear that all effort (and money) has been vested in the theatrical spectacle of the moving shell, a fiendishly complex engineering challenge of ultimately questionable value. Much is made of the fact that this 4,000-ton steel lattice can be rolled in and out with the energy output of just one Toyota Prius, but the elephantine question remains: how often will they bother to move it?

For the opening week, it was decidedly fixed in the same spot, with a plethora of blackout blinds drawn so the special quilted pillows couldn’t be seen, and a series of hefty plywood structures erected inside to form the stage and seating for the opening performance – no foldaway kit of parts here. It takes too long for the specialist sail-manufacturer to come and change the blinds, we were told, so they would stay put.

Dan Doctoroff, former deputy mayor and booster of the Shed, calls the project “a Swiss army knife for culture”. But there is a very real danger that the elaborate gadgetry will distract from the task of simply making good work, with a constant pressure on Poots to demonstrate quite how adaptable his new toolbox is. The dream of a brave future of movable, transformable architecture, it seems, remains best observed in 1960s drawings.