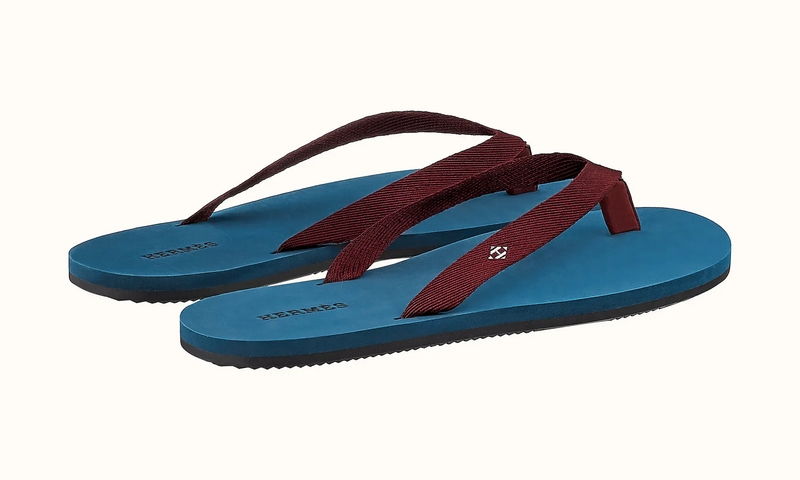 This article titled “The £335 flip-flops: what the super-rich wear to look like everyone else” was written by , for The Guardian on Tuesday 3rd September 2019 17.32 UTC

Ah, I see. So these are expensive sandals, are they? Not particularly. You can buy them from the Hermès website at just £335 for the pair.

I should hope so! You don’t consider £335 expensive? Well, if you want a pair of high-fashion sandals, you can easily spend £735 on a pair of Honolulu mules from Louis Vuitton, or £740 on some “stud-embellished leather sandals” from Prada.

Wow, these “summer sandals” sound like good value now. What do they look like? They have a rubber sole, a foam midsole, “technical straps” and a “leather insert between the toes”. Sometimes they are described as having a “calfskin lining”.

Wait a minute… You just described a flip-flop. Did I?

You did. Bit of foam with some straps sticking out between the toes: that’s a flip-flop. Sometimes with a calfskin lining.

I can literally buy a pair of flip-flops for 99p! That’s very reasonable.

Even official fancy Havaianas are only about £20. What makes Hermès think it can get away with such a high price tag? The fact that the Hermès family who control it are worth an estimated $53.1bn?

That’s a decent insurance policy, granted. But flip-flops for £335? Will people really swallow that? They might. Remember Gucci’s range of deliberately dirty trainers I told you about in February?

Another splutter! I remember now! What has happened to the world? Fashion got … complicated. Not being rich is cool, you see. But being rich is obviously much better. So rich people now want to pay a lot of money in order to look the same as everybody else.

Great! Do you think they’d like to buy my clothes? Maybe fashion isn’t quite that complicated just yet.

Do say: “I can imagine myself wearing a pair of Hermès flip-flops.”

Don’t say: “That’s because they look exactly the same as the ones you already have.”