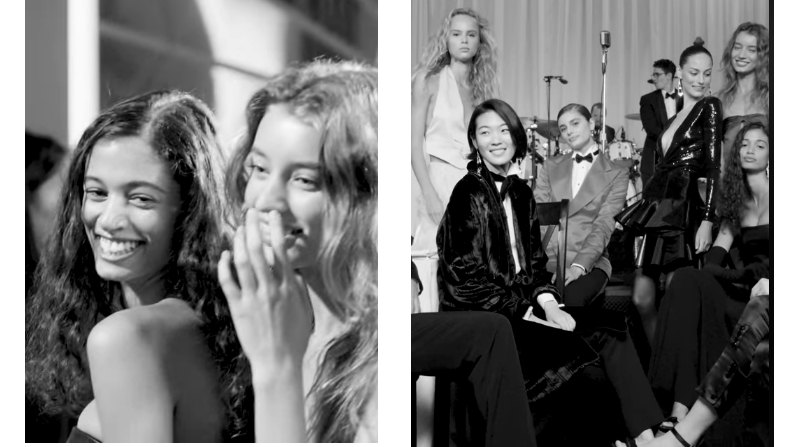 The rumours swirling around New York fashion week this season were that it would be the most political ever. It has been declared to have “a Trump problem”, with brands moving their shows from a venue at Hudson Yards after it emerged that the developer, Stephen Ross, recently held a fundraising event for the Trump 2020 campaign.

At Ralph Lauren, however, fashion remained an escapist spectacle, at least on the surface. Hosted in a ballroom transformed for the evening into “Ralph’s Bar”. A live band provided the soundtrack by which bowtie-wearing waiters mixed rum-heavy cocktails to wash down corned beef sandwiches. It wasn’t a stretch to imagine a Gatsby-era reveller stumbling out, roaring drunk and racing back to West Egg.

Gigi Hadid opened the show, sauntering her way through the tables to Cole Porter’s track Night and Day wearing a bowtie and sparkling oversized overcoat. Models including Taylor Hill wore satin tuxedos in bright red, yellow and blue, colours picked up in the more ramped-up second half for floor-length strapless satin gowns – vivid against the otherwise largely monochrome palette. Razor-sharp tailoring and sumptuous oversized velvet jackets were offset by flapper-esque frocks and a minidress erupting with unruly feathers. This was clubwear at its most swanky: less Hacienda, more Hamptonites in town to let their hair down.

Lauren has come to represent aspiration and a very neatly tailored, very exclusive version of the American dream, whether via preppy polo shirts fit for Ivy League campuses or cashmere cardigans best accessorised with an Aspen tan. This latest collection was Lauren’s take on evening wear – tuxedos took centre stage. This collection, he explained in the press release, celebrates “that timeless style, more relevant than ever, for the modern woman who is both independent and glamorously contemporary”.

Even Lauren himself, who earlier this summer became the first American designer to receive a knighthood, for services to fashion, ditched his signature cowboy boots. Janelle Monae, who took to the stage – and floor and tables and chairs and laps – after the show, upending crisps and drinks as she went, wore a beaded gown from the collection. While guests were asked, with a rigidity befitting the show’s spot just down the block from the New York stock exchange, to come wearing black and white eveningwear.

Commercially, the past few years have been a rollercoaster for the brand. But in July it reported quarterly profits beyond what were expected. There are still challenges ahead, including the looming spectre of proposed Trump administration tariffs.

It is seen as a knotty time to be as American, with heritage brands being forced into something of a reckoning. Lauren’s near-national treasure status no doubt played a role in seeing the Hillary-supporter become the designer of choice for Melania Trump at her husband’s inauguration.

But key to the backstory of Lauren, which, as with so many others’, started with immigration. He might have made a career out of WASP-y style signifiers, but one of the most American aspects of the man and his brand is that Ralph Lifshitz was born in 1939 in the Bronx to Jewish parents who had fled Belarus.