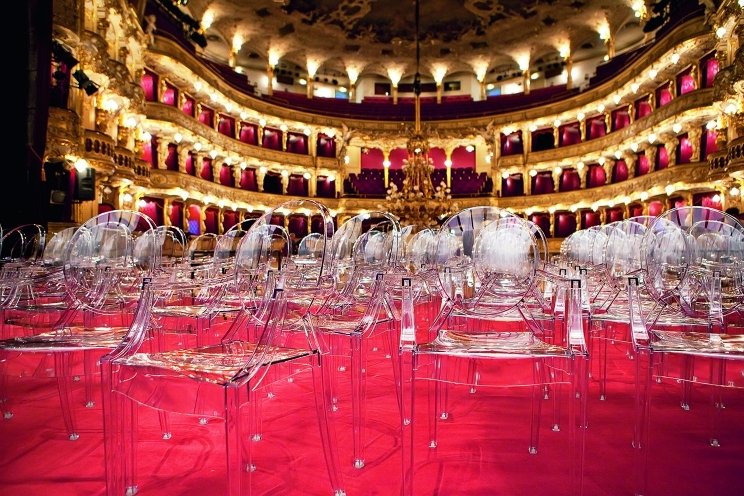 On October 3rd, Philippe Starck celebrated, in Milano, the anniversary of the Louis Ghost chair, launched in 2002. Louis Ghost becomes not only a Kartell absolute best-seller but, on the strength of 1.5 million pieces sold, it is, furthermore, an icon and the most widely sold design chair in the world. This is the chair that consecrated Kartell as world leader in the production of “transparent design furnishings” and through which the aesthetic aspect of transparency became accepted globally by revealing the enormous functionality of the material.

In presenting it, Philippe Starck described his new project in these terms: “Actually, the Louis Ghost chair designed itself. It is a ‘Louis something’, a sort of ghost, a reflection, the shadow of a chair in a style that I have called Louis Ghost, the ghost of Louis”. Starck continued. “You are not sure exactly what it is but everyone recognises it and sees it as something familiar. It’s here when you want to see it and you can blend it in if you want to be discreet. It is half disappearing, dematerialising. Like all the production of our civilisation.”

The eclecticism and the multi-functionality of the chair are such that it is at home in private homes as well as in hundreds of international public areas such as restaurants, bars, museums, theatres and gardens. From the Prague Opera to the University of Budapest, to the Kong Restaurant in Paris (where the Louis Ghosts and the masks decorating the premises are mentioned in one episode of Sex & The City!), they all use what has now become universally recognised as the “transparent chair” or the “Starck chair”