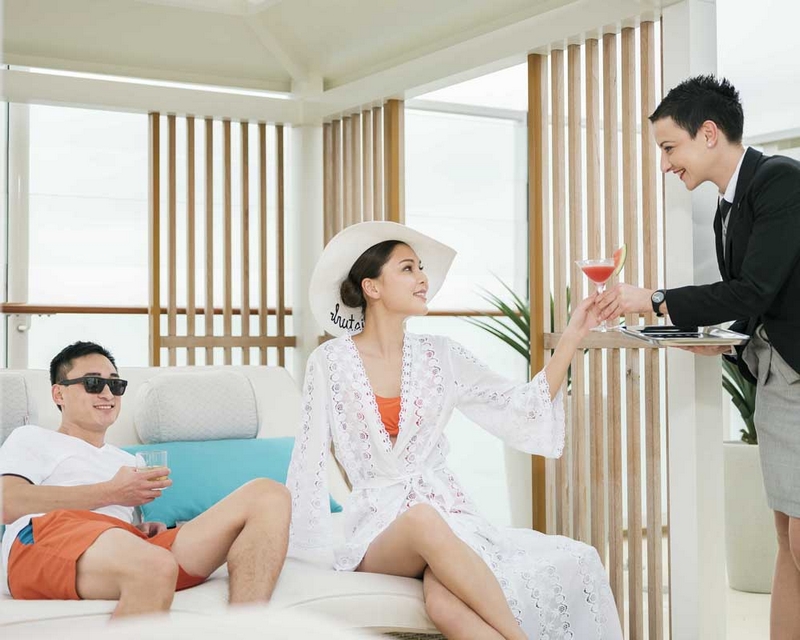 This article titled “Singapore launches Covid-secure luxury cruises … to nowhere” was written by Jasper Jolly, for The Guardian on Thursday 8th October 2020 13.55 UTC

Singapore is launching Covid-secure cruise holidays to nowhere, in the latest attempt to offer a long-distance travel experience with no stops.

Australian airline Qantas drew criticism from environmental groups last month after advertising a seven-hour round trip from Sydney including fly-pasts of famous sights including Uluru and the Great Barrier Reef.

Now the Singapore government has given approval for cruises to nowhere in a bid to help a tourism sector battered by the coronavirus pandemic. Residents of the city-state will from November be allowed to board the cruises, during which they will be confined to the ships for the entire time.

The Singapore Tourism Board on Thursday announced that Genting Cruise Lines’ World Dream would be the first ship to welcome passengers aboard on 6 November. Royal Caribbean International’s Quantum of the Seas will begin sailing in December.

The ships launching from Singapore will only be allowed to carry half their full capacity, with extra cleaning schedules and mandatory masks “at all times”.

Passengers will be obliged to take Covid-19 tests, and mingling will be discouraged. Fresh air will be pumped throughout the ships via air-conditioning systems, and any non-Singapore-resident crew will have to carry out 14 days of quarantine in their home country and a further 14 days in Singapore before boarding.

The cruise industry has been among the hardest hit during the pandemic, after outbreaks on multiple ships among staff and passengers sharing enclosed spaces for days.

However, the announcement prompted concerns from environmental campaigners. Cruise ships generally use heavy fuel oil, meaning they can be significant polluters.

A 2019 study by Transport & Environment (T&E), a campaign group, found that in 2017 Royal Caribbean alone emitted four times more sulphur oxides than all of Europe’s cars combined. Sulphur oxides can cause health problems and acid rain, while harmful nitrogen oxides can also be a by-product from the industry.

Many ships scrub harmful gases from their exhaust and then discharge the pollutants into the sea, as well as emitting large amounts of carbon dioxide, said Lucy Gilliam, a shipping campaigner at T&E.

“These ships can have a higher carbon footprint than flying in a jumbo jet,” she said. “They’re burning significant amounts of fuel per passenger because they’ve essentially got a huge hotel load as well as amusements on top.”

Efforts to restart the cruising industry have already been plagued with problems, with Covid-19 detected on cruise ships in Norway and Tahiti in August.