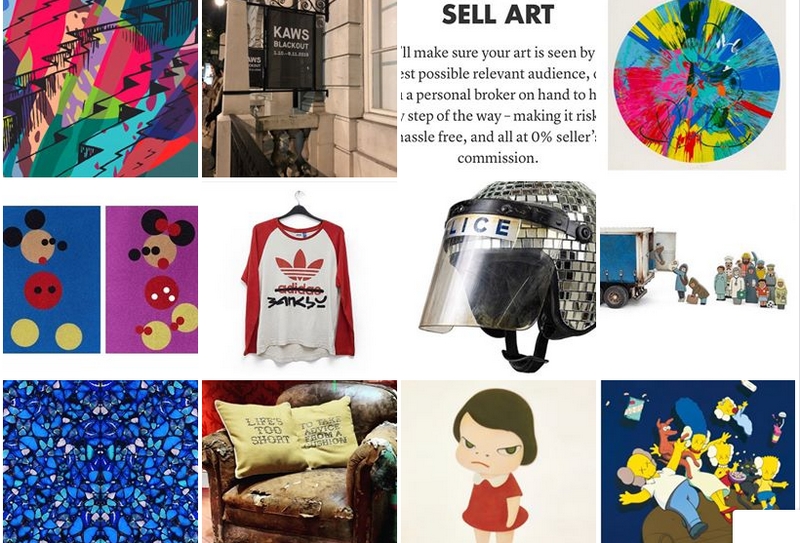 This article titled “See the big picture: the art of making money from upcoming artists” was written by Jo Thornhill, for The Observer on Saturday 9th November 2019 20.31 UTC

It is the artwork for our times. A four-metre-wide Banksy depicting MPs in the House of Commons as chimpanzees set a record for the artist when it sold for close to £10m at Sotheby’s in London after just 13 minutes of bidding.

The £9,879,500 winning bid was notable not just for its size but by how much it exceeded the pre-auction expectations of between £1.5m and £2m. It also, no doubt, prompted anyone who had bought an early Banksy to raise their eyebrows about what value the picture on their wall might now hold.

But while an original Banksy is out of reach for all but the wealthy, is there money to be made from other street artists or up-and-coming painters? Has his success resulted in a knock-on effect that investors can take advantage of?

“Banksy can reduce complex subjects and debate into a simple, legible message, often with humour,” says Alex Branczik of Sotheby’s. “But he is also unique and has global appeal – not true of all street artists, or those who started in a similar way to Banksy. Anyone thinking they can find the next Banksy, or get ahead of the curve, is likely to get it wrong.

“If you are going to spend some money on a piece of art, make sure it is something you love. It is much better to buy one thing you are going to enjoy seeing on your walls, rather than many different pieces you think will rise in value. There are no certainties in the art market – fashions come and go – but if you have an artwork you love, there is something greater there than its financial value.”

Art has always held a fascination for investors – the Knight Frank luxury investment index shows values have grown 146% over the past 10 years and 10% in the past 12 months.

But urban artist Charles Uzzell-Edwards – otherwise known as “Pure Evil” – warns potential investors to tread with caution and take time to understand the market. “Looking at an artist is similar to picking out a racehorse. You’ve got to study the form,” he says.

Uzzell-Edwards, who has a gallery in Shoreditch, east London, advises: “If there is a piece of art or an artist you like and you want to buy, see what shows they have done. How long have they been around? What prices have they sold for in the past? Visit galleries and speak to dealers. Be sure there is some longevity or a track record.”

Co-founder Ian Syer says there has been a big increase in demand, given the returns some investors and collectors have seen in the Banksy market. Interest doesn’t just come from the typical banker or hedge fund manager looking for a status symbol for their City flat.

“Some of our largest clients are ordinary working people who have financed art portfolios through leveraging their property and remortgaging, or taking advantage of cheap finance – 0% credit card deals for example,” he says.

But some street or urban artists’ work peaked in value around 10 years ago. Syer explains: “In 2008 there was a big rush of money into this market, culminating in Bonhams’ Urban Art auction shortly before the banking collapse. Many artists set records which are unlikely to be broken for some years.

“However, the artists or markets that recovered, such as Banksy, have really prospered. We would now class his work as ‘blue chip’, as it is being sold globally alongside Andy Warhol, Roy Lichtenstein and Keith Haring.”

Investors, he says, should look at the secondary market for an artwork with a positive track record – perhaps it has been auctioned a few times and increased in value. “Edition prints are a great way of getting into markets where original works are out of reach, and with online trading platforms it is very easy to buy and sell.

For those with smaller amounts to invest, Syer suggests looking at work by Irish street artist Conor Harrington or an unsigned Banksy print.

Be vigilant about fakes and get verification. Scams and frauds are common. In the case of Banksy, Pest Control is an authentication service set up by the artist in 2008 that can verify works for a fee.

Buyers should also be aware of dealer or auction fees.

Peter Gagliardi, head of Gagliardi Gallery in Chelsea, London, which sells original contemporary art, says even if an artwork rises in value, owners will lose 20% to 25% in fees when it is sold. “If you view your artwork as an investment, then factor in the commissions and fees,” he says. “How much has the work got to increase in value before you have covered any fee when you come to sell?”

Gagliardi warns buyers that they need to be prepared for ups and downs in the market – an artist who is popular today may not necessarily stand the test of time. He adds: “Damien Hirst was fashionable in the contemporary art market a few years ago. There was a big media push. But I would say that has peaked now and prices have been falling.

“All the more reason to buy art you love: then it should not matter if it rises or falls in value.”

‘The return is in the pleasure it brings’

Ian Hay is passionate about contemporary art: so much so he left his job as a pension administrator to set up the Saul Hay Gallery in Manchester with his wife, Catherine, to champion modern artists.

He is especially proud of his personal collection, in particular an oil self-portrait by Canadian artist Andrew Salgado, pictured, which he bought for £3,000 in 2012 at the London Art Fair. Salgado has become widely acclaimed and his larger paintings can sell for tens of thousands of pounds.

“I’d been following Salgado’s work for a while when I saw this piece – The Paradox. I liked it immediately. Its loose expressionism style appeals to me,” says Hay, who is pleased to have spotted a young artist before he became a global success. “I couldn’t afford an original Salgado now. I suppose that’s a sign I made a good investment.

“But, to my mind, the real return is in the pleasure a piece of art brings to you and I just love this painting.”