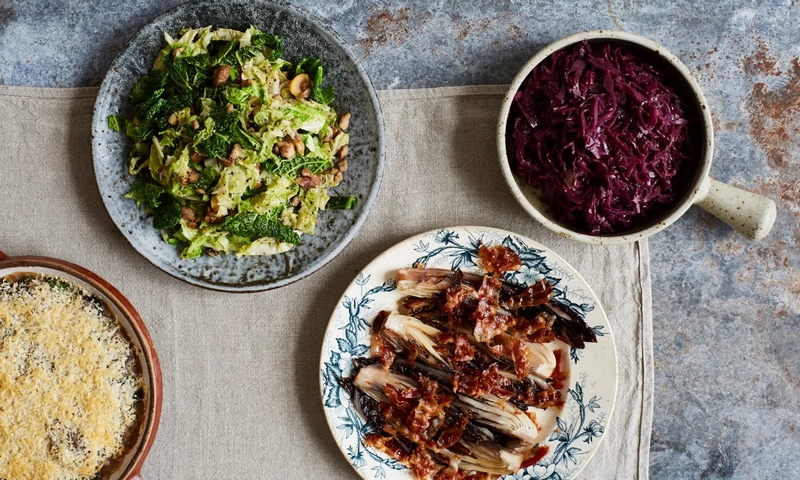 This article titled “Rachel Roddy’s recipes for Christmas side dishes” was written by Rachel Roddy, for The Guardian on Monday 10th December 2018 12.00 UTC

The other night we roasted chestnuts. Not over an open fire, because we don’t have one; nor in the oven as I usually do, but in a frying pan on the hob. I’d never cooked chestnuts this way, thinking it required a special pan that looks like a cross between a frying pan and slotted spoon. But when I tried to buy one of these holy padella per castagne, the man on the stall told me they were a waste of time and that an ordinary frying pan worked just as well.

So I scored the curved side of some handsome chestnuts, tipped them into a frying pan and lit the gas. Part of the joy of chestnuts is the crackle: the way their slashes open into grins, or how they flash their bottoms as they roast, making the kitchen smell all at once like hot buttered toast, simmering beans and smouldering wood.

After 15 minutes of roasting and pan-shaking, I bundled the hot nuts into a slightly damp tea towel to steam and to loosen the shells, and we waited, drinking red wine, with a seven-year-old asking, “are they ready yet?” for each of the 10 minutes.

Finally, the unbundle! Our first proper red wine and caldarroste of the year – the first of many festive rituals, and the start of our very own Christmas chronicles.

Every damned nut was rotten. Despite the buttery outside, the hearts were either black or green and tasted like a cross between charcoal and a mouldy wall. It was too late to get more. Luca cried, I drank more wine and Vincenzo picked over the chestnut wreckage like an expert looking for answers. Meanwhile, in another December ritual, some braised red cabbage caught and soldered itself to the bottom of the pan, and I burned the heel of my hand pulling it into the sink. It was the end of the world. Until I remembered it wasn’t, and we did the sensible thing and went for a pizza.

And the moral of the story is: don’t judge a chestnut by its skin – especially if you have bought it from the back of a lorry just off the Via Ostience. Also, don’t take your eye off the cabbage. Or maybe it is simply a reminder for me that, at this time of year, when there are multiple rituals – edible and otherwise – to be fitted into your advent calendar, things can go wrong and feel like the end of the world – even when they aren’t.

With that in mind, at this most wonderful and bonkers time of the year for cooking, I still hope to fit at least two of the dishes below into our still-uncertain Christmas eating. The first is the red cabbage – it comes into its own when braised/ baked with onion, apple, sugar and vinegar, transforming it into a succulent, burgundy slump. It’s as perfect with Christmas Eve sausage and mash as it is Christmas dinner.

The second is the River Cafe-inspired chard gratin with anchovy, olives and a breadcrumb crust, because it is delicious, an alternative to meat and can be made in advance. The third is the bitter delight that is radicchio (elongated treviso, or round chioggia), pan-fried with pancetta, for Christmas Day.

Last but not least, I am hoping for more roasted chestnuts, – first with red wine and a gas fire, then crumbled into heavily buttered, nutmeg-flecked cabbage or spouts – just the simplest and nicest combination, especially with turkey and sweetly aromatic bread sauce made to Jane Grigson’s recipe. But this time, maybe someone else can buy the chestnuts.

Pick over the chard, trim any tough ends, cut the leaves away from the stems and cut the stems into 2-3cm pieces.

Plunge the leaves into a pan of boiling water for three minutes, then lift from the water and drain. Add the vinegar and bay leaves to the water, bring back to a boil, add the stems, simmer for eight minutes, then lift out. Keep 500ml of the cooking water.

In a frying pan, sauté the onion in the butter and oil until soft. Add the garlic, chilli and six of the anchovies (if using), and fry gently until the anchovies disintegrate.

Add the chard stems and stir again, then sprinkle over the flour and cook for another minute. Now add the reserved cooking water slowly, stirring all the time, until the sauce is as thick as double cream – you may not need all the liquid. Stir in a little nutmeg and taste for salt and pepper.

Heat the oven to 180C (160C fan)/350F/gas 4 and butter an ovenproof dish. Pour half the mixture into the dish, cover with chard leaves, dot over the olives and remaining anchovies, then pour over the rest of the mixture.

Sprinkle with parmesan and breadcrumbs, dot with more butter and bake for 20 minutes.

Radicchio with pancetta (or bacon)

750g radicchio – ideally long treviso, but round chioggia, or 500g radicchio and 250g white chicory will do
4 tbsp olive oil
150g pancetta or bacon, cut in strips, plus extra, diced, for sprinkling (optional)
Salt and pepper

Trim the end of the radicchio and pull away any damaged leaves. Cut long radicchio in half, or the round version into quarters, and make two deep cuts into the root end. Wash in cold water and dry.

In a pan large enough to fit everything in one layer snugly, warm the oil and fry the pancetta or bacon over a low heat, so the bacon fat melts and sizzles, but doesn’t brown.

Add the radicchio, turn it a couple of times to coat it in fat, turn the heat down to low, cover and cook, turning twice, until the radicchio feels tender at the root – about 20 minutes.

Season, turn again, then lift everything on to a serving plate. Sprinkle with more crisped-up pancetta or bacon, if you like.

Heat the oven to 150C (130C fan)/300F/gas 2. Cut the cabbage into quarters, discard the outer leaves, cut away the hard central core and shred each quarter finely.

In a large pan, gently melt the butter and oil over a moderate flame, add the sliced onion and fry until soft and translucent.

Add the sugar and cabbage to the pan and stir well to coat. Quarter the apple, core but do not peel, chop it into little chunks, add to the pan, and stir again.

Add the vinegar, salt and black pepper, stir and cover. Cook over a medium flame for 15 minutes. Add the water and red wine, put the pan in the oven and roast for two hours.

Quarter the cabbage, cut away the hard core, then shred roughly.

In a large frying pan, warm the oil and butter, then add the cabbage and cook gently, tossing and turning, until it wilts.

Add a little water or wine, and let it bubble for a few minutes.

Crumble the chestnuts into the pan, grate over some nutmeg, grind some black pepper and a pinch of salt, stir and serve.