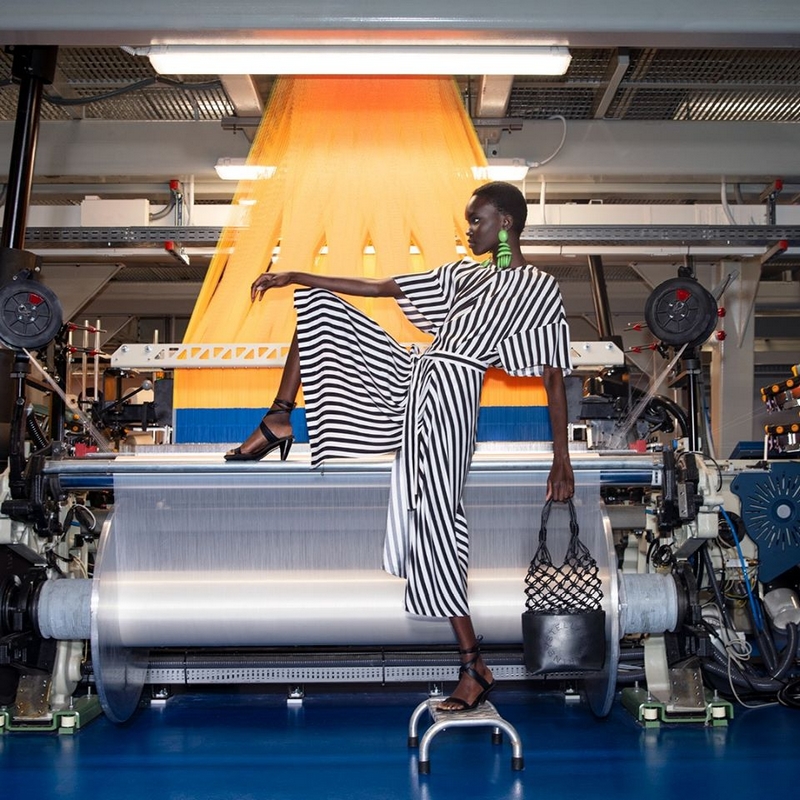 Natural; confidence. Our relationship with the environment is as dynamic as the stripes on this dress and as interwoven as the knots on the Stella McCartney Knotted Half and Half bag. That’s why we need to protect it by using the most luxurious materials with the lowest possible impact. @stella Mccartney

The shutting down of society as we know it is giving a lot of time for reflection, not least in fashion circles. In an interview in the design magazine Dezeen, the influential trend forecaster Li Edelkoort has called it a “quarantine on consumption” that is having a devastating impact on our economy and culture, but ultimately offers “a blank page to a new beginning”.

While sections of the fashion industry already knew they could not continue on their current trajectory, it was inconceivable that brands could be forced to slow down, let alone stop production altogether. But that is what has happened as famous names from Prada to Zara have turned their production lines to making medical gowns and masks, and luxury houses have changed from making perfume to sanitisers. It’s an unprecedented interruption of an industry that has relied on speeding from one season’s sales to the next. And it is bringing with it a new sense of connectedness, responsibility and empathy.

Until factories started to feel the effects of Covid-19, the global fashion business was producing 150bn items of clothing each year, far in excess of the needs of a global population of 7.9 billion. Clothing consumption globally was in 2017 projected to rise still more, by 63% by 2030, according to the Global Fashion Agenda and Boston Consulting Group. Who knows if those projections will be dented now that bricks-and-mortar shops are closed, orders have halted and supply chains have been stopped in their tracks?

As factory orders dry up, the lowly paid, overworked garment workers without sick pay or any financial cushion are the ones who are paying the biggest price. The question is how, when the self-isolation and fear abates, we can use this temporary moratorium on production to correct the course of a carbon-guzzling and exploitative industry. We cannot continue down this path of unchecked overproduction, waste and human misery.

On Saturday, people around the world will be reflecting on the temporary decrease in CO2 as they turn off their lights at 8.30pm (local time wherever they are), to take part in Earth Hour. This annual environmental campaign by WWF will remind us that, according to the UN, we have only 10 years to keep global warming to 1.5C. This is something the academics Kate Fletcher and Mathilda Tham are acutely aware of. In their new report, Earth Logic Fashion Action Research Plan, they write: “The time frame of 10 years is the same as a child’s time at school. One eighth of most people’s lifetime, or 10 annual reports for a business. Consider what you, your family, community, workplace will do in the coming 10 years. Every moment will count.”

Related: Conscious, ethical and cruelty-free: a guide to the language of sustainable fashion

Their argument pivots around the idea that the only way to ensure we cut carbon emissions and end the cycles of overproduction and waste is to imagine a whole new system that places the Earth’s needs before those of industrial growth. In a post-Covid-19 world, that’s beginning to look slightly more feasible. “We propose planet before industry as a radical idea in which the health and survival of our planet Earth is given precedence over business interests,” they write.

The coronavirus pandemic has brought into stark focus the fact that business as usual can be stopped in its tracks. Anything, it seems, is now possible. According to the environmental journalist and broadcaster Lucy Siegle, who wrote the foreword to the Earth Logic report, this break is a “lifeline” to the industry and a “chance to reboot our efforts and change our course based on evidence and fact”.

“Once we realise that the current system is always going to be self-limiting as there are finite resources, putting Earth first is the only option,” says Fletcher, of the London College of Fashion’s Centre for Sustainable Fashion. This is not about tinkering around the edges of the existing way of working, creating “sustainable” collections or clothing recycling schemes: Earth Logic attacks the very root of the problem: the existing economic model itself. This means a shift from production to the maintenance, use and care of existing clothes. It means reducing the volume of clothes we produce, and in turn, the amount of resources we are using. It means moving from globalised, tangled and unsafe supply chains to small production centres based around the needs and desires of local communities. “We need to find a role for industry scattered across communities,” says Fletcher, with multiple local hubs for people to be educated, to make and repair their clothes.

Patriarchy and growth logic are inextricably intertwined, says Tham. The same sorts of people are making the same sorts of decisions. According to Earth Logic, there would be respect for “fashion in non-western geographies. We can train the focus of fashion on supporting race and gender equality. Each perspective offers new models and practices for relating with fashion as well as broadening and diversifying the base of fashion expertise.”

These are all points the next generation coming into the industry is demanding, too. “The questions students are asking are very different now,” says Tham, who teaches fashion and economics students at the Linnaeus University, Sweden. How we design clothes must connect with the needs of society and the environment and work with them, not against them. We are seeing this happening with designers looking for ways to help make protective equipment and gowns for medical teams. These new positive role models must be allowed to lead the way forward.

We have uncertain and painful times ahead. But Fletcher says: “It’s about trying not to look away when the going gets hard.” We are seeing that in times of real emergency, people’s behaviour has to change. Even pressing pause on fashion’s relentless cycle for a season (possibly two) will have a profound effect. Already, so much has changed. The cycle of fashion for fashion’s sake has been broken. We must use this time to rethink how this industry can be redesigned with respect for the planet and the health of the people who work in it.

“It’s like turning a kaleidoscope and seeing new patterns emerge,” says Tham. “There are so many possible patterns. Things can change very quickly when we have a new perspective. It is not impossible.”