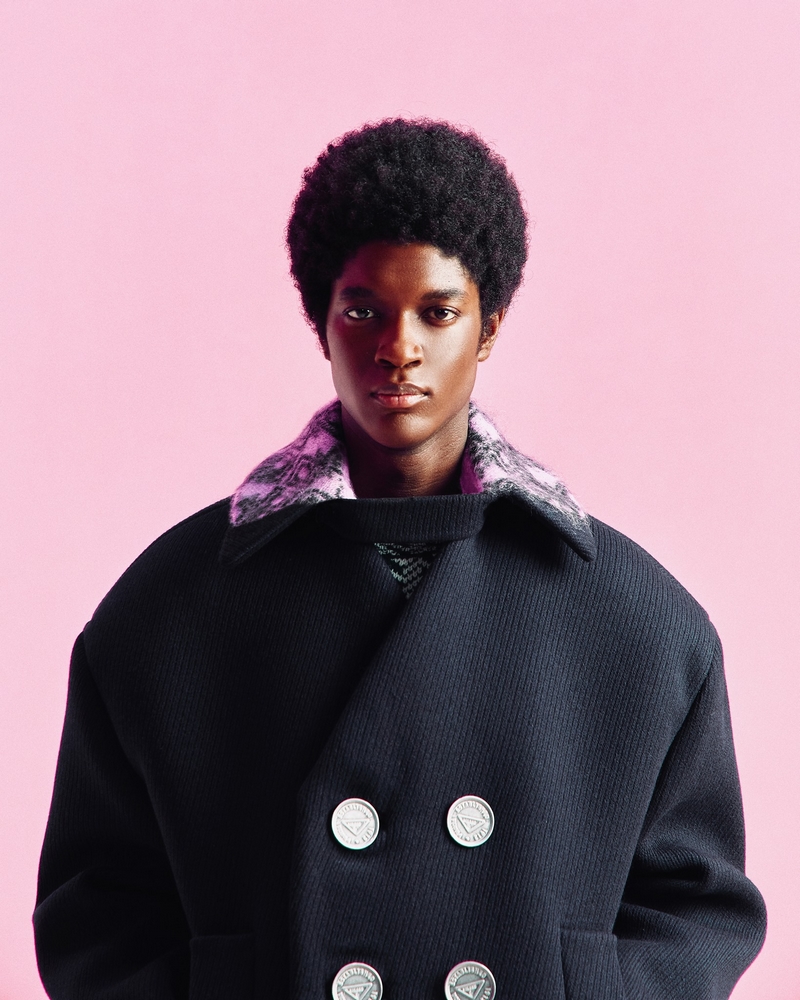 Raf Simons’ first collection for Prada simulates a yearning for contact, with proportions and textures that shock and excite the eye.

Executed in leather and bouclé, lined in geometric jacquards, garments are sensual – crafting a topography of feeling, enjoyed by the wearer alone. Color and pattern excites the eye; surfaces entice touch.

The Prada Fall/Winter 2021 Menswear collection by Miuccia Prada and Raf Simons takes as its basis an intimate and personal wish for contact, our urge to exchange and relate. The foundation of all is the individual: the human body, and its freedom. 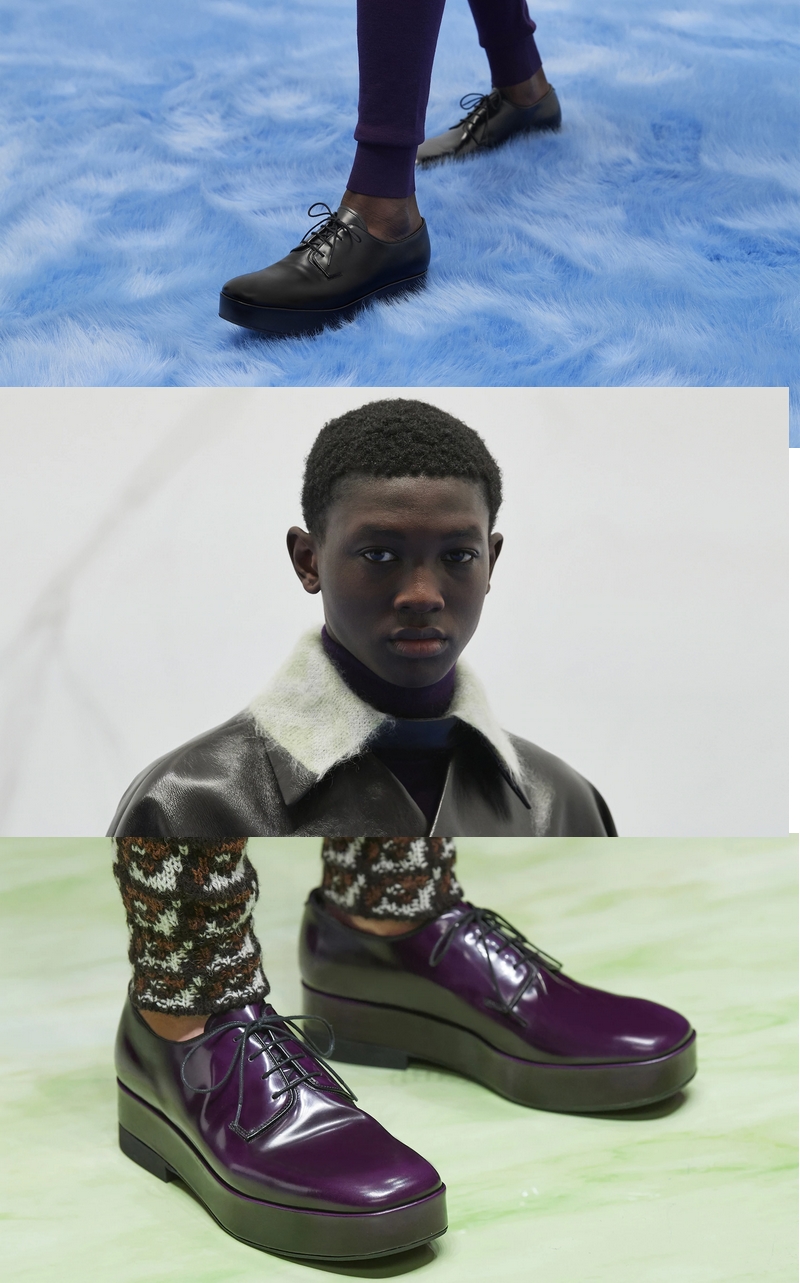 The need to feel, the pleasure of tactility, results in a panoply of surface texture and textile.

The interplay is projected outwards, to the sequence of rooms the models navigate through the digital show. Each excites the senses: backdrops brilliantly-hued, the models’ isolated passages underscored by an original electronic soundtrack by Plastikman aka Richie Hawtin. Devised by Rem Koolhaas and AMO, the show’s ‘non-spaces’ are defined by panes of marble, resin, plaster and faux fur. Inviting and seductive, they can pretend to be both interior and exterior, hard and soft, warm and cold: simultaneously both and neither, they allow absolute freedom of interpretation and expression, says Prada’s Raf Simons.

A similar doublespeak is reflected in the depiction of the body itself – via clothes reduced, minimalized in structure. The logical conclusion is to return to the body: jacquard-knit bodysuits create a streamlined “second skin”, serving to delineate the figure in dynamic movement.

These bodysuits paradoxically reveal while concealing, placing an emphasis on physicality, but also covering the form. Some are proposed alone: in other outfits, they are used to create a base layer under tailoring and outerwear. Single and double-breasted coats are constructed on rectilinear lines; bomber jackets are generous. 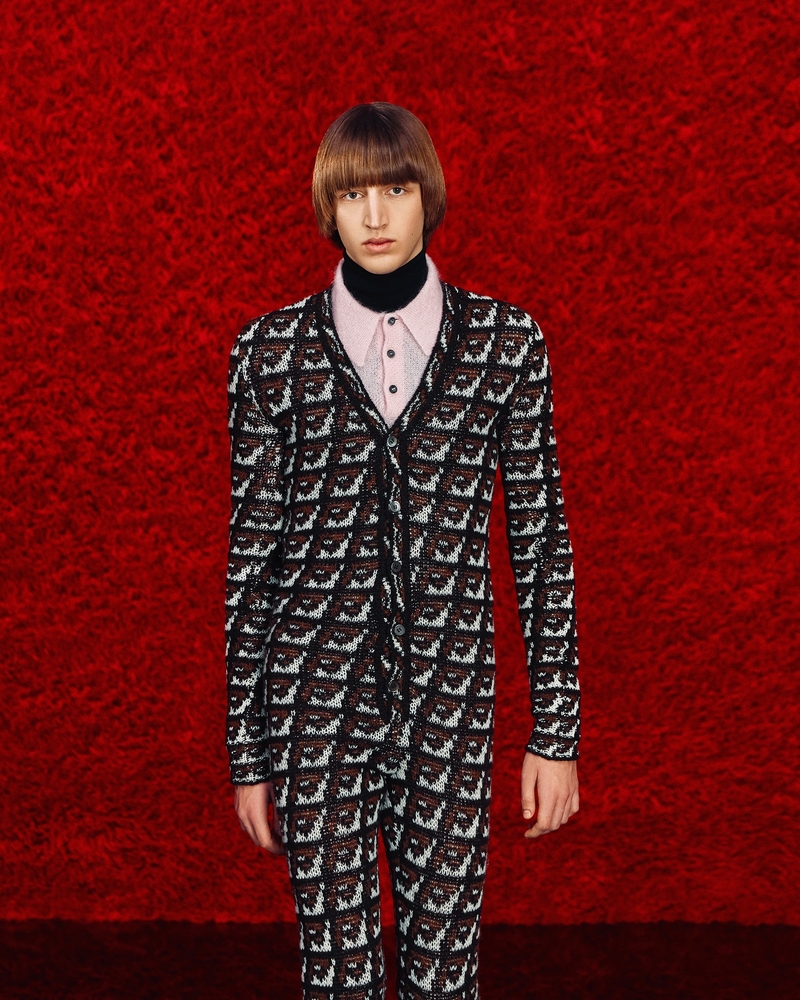 According to Prada Group, the materials utilized in the set of the Fall/Winter 2021 Menswear digital show will be upcycled, finding a new life after the event through special product installations and pop-ups around the world.

Finally, these materials will be donated to Meta, a circular economy project based in Milan, which offers sustainable solutions to waste disposal within ephemeral events by collecting and recovering materials for selling and rentals. Meta works in collaboration with La Réserve des arts, an association offering a service of collection and recovery of raw materials and decoration waste from fashion shows, making them available to professionals and students in the cultural sector. 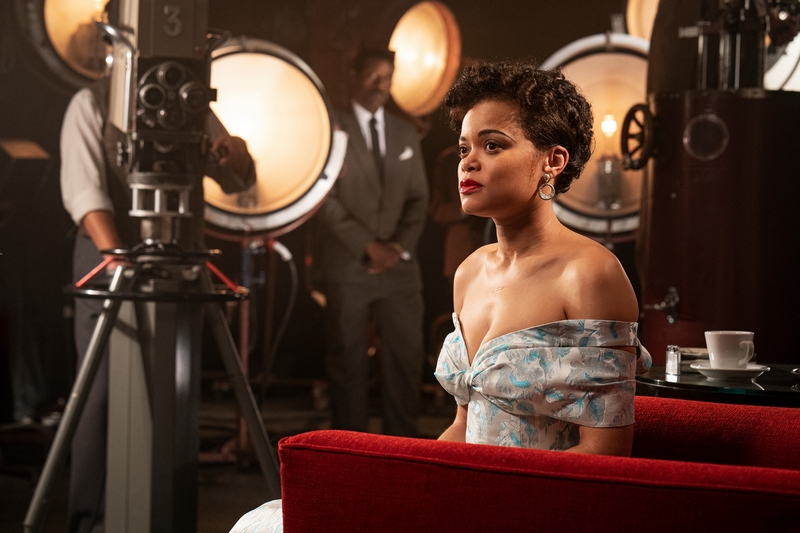 Prada announced the collaboration with Oscar-nominated Director Lee Daniels for the United States Vs. Billie Holiday

Luxury Italian house collaborates with Oscar-nominated director Lee Daniels for the upcoming feature film, THE UNITED STATES vs. BILLIE HOLIDAY, designing a selection of costumes to be worn by Grammy-nominated singer-songwriter Andra Day as Billie Holiday.

Prada turned to its archives to reinterpret Holiday’s most iconic outfits with a contemporary eye, while honoring the historical time period of the 1940’s and 1950’s.

Prada designed nine costumes ranging from silk satin evening gowns in a 1950’s silhouette, feather ends and fringe embellishments, to a column dress in double ivory silk satin with a sweetheart neckline and precious crystal embroidery. Billie Holiday was a timeless cultural force, imprinting her soulful voice and style on the course of American music and art. Holiday’s style, like her voice, was melodic and powerful, mirroring her classically iconic and beautifully complex influence on our cultural landscape.

THE UNITED STATES vs. BILLIE HOLIDAY will debut as a Hulu Original film in the U.S. on Hulu on February 26, 2021. 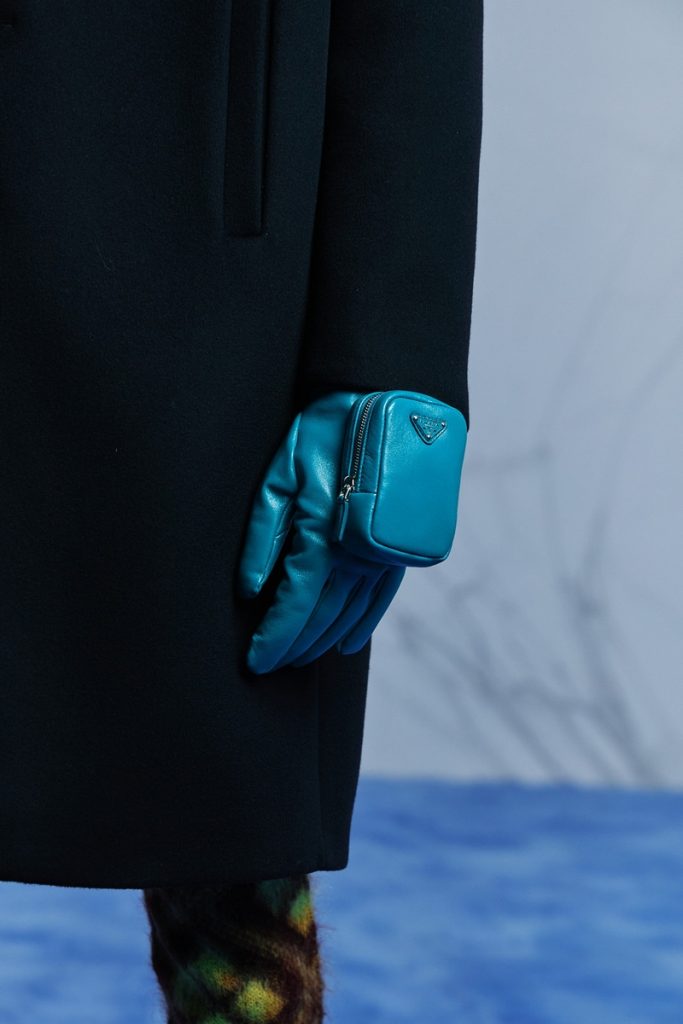 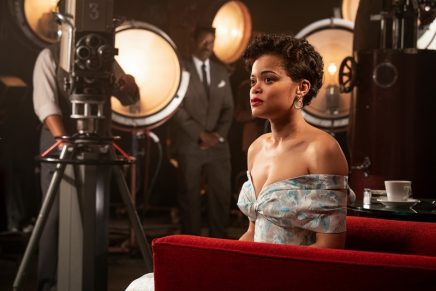 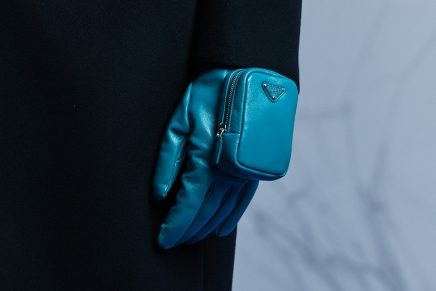 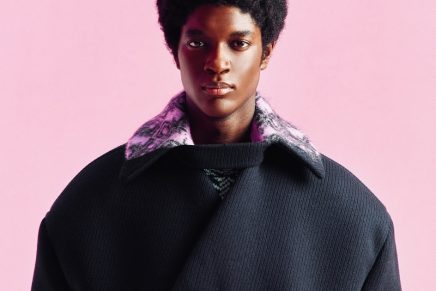 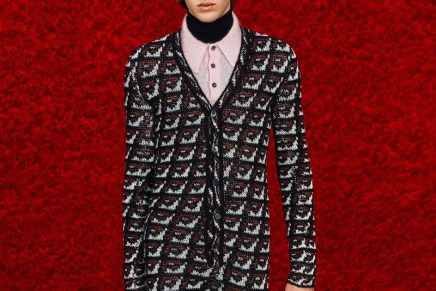 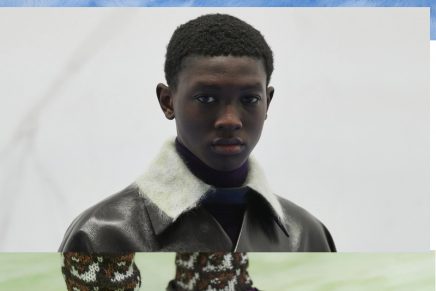 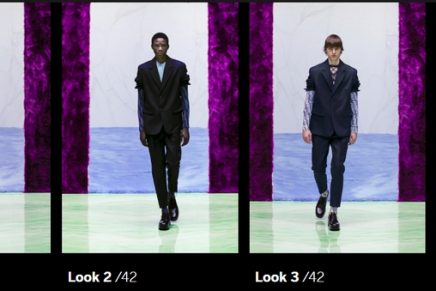