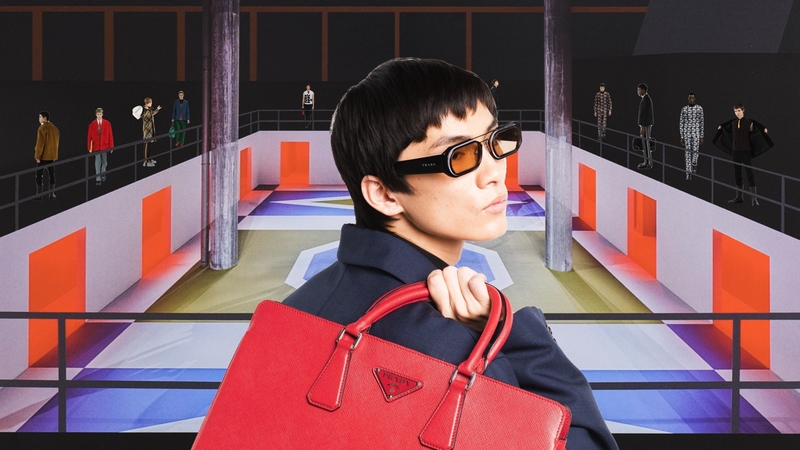 On the third day of Milan men’s fashion week, the concept of the working man emerged as a theme in the newest collection from Prada.

The brand, which skipped Milan last season to show instead in Shanghai, showcased a collection which focused on formality and tailoring but with Miuccia Prada’s surreal touches. On a set that was designed to replicate a futuristic town square (a white statue of a man on a horse stood in the centre of the box-like runway), models replicated Prada-ised commuters on their way to work.

Three-piece suits were worn with trouser straps under the shoes, raincoats were accessorised with medical green gloves and riding boots and grey office trousers were matched with scoop-neck jumpers patterned with diamond-shaped optical illusions in red, black, yellow and grey.

Backstage, Miuccia Prada, surrounded by a throng of well-wishers including the actor Riz Ahmed, Quavo from rap trio Migos and Riverdale star Cole Sprouse, explained that the central idea behind the collection was the importance of the daily grind. “The only thing that makes me calm and optimistic is to give value to [your] job and work,” she said. “I want to give hope: if you do well in your job [and do it with care and intelligence, that’s something.”

The best looks, however, were the ones which seemed to shift away from this idea of “everyday heroism” and go somewhere a bit more out-there: an aubergine-coloured ruffle shirt and tangerine winter jacket that looked straight out of Harold and Maude, worn with a pink polo neck and red trousers.

Sartorial inspiration from traditional male archetypes has been plentiful this fashion week. On Saturday, Dolce and Gabbana featured a collection with nods to a number of workwear looks including the farmer, the painter and the builder, while Salvatore Ferragamo riffed on the looks of the sailor, the soldier, biker and businessman at their show on Sunday.

Related: Prada in the desert: how a fake luxury boutique became a Texas landmark

These thematic looks at masculinity were interesting to note, at a time when Milan men’s fashion week is making something of a comeback, with fewer mixed male and female shows; Gucci will host their first men-only show since 2016 later in the week.

After the show, Miuccia Prada touched upon environmental issues, saying that she was hopeful about the state of fashion, despite environmental concerns. “It’s incredible that in one year sustainability became a normal thing, I’m very optimistic,” she said.