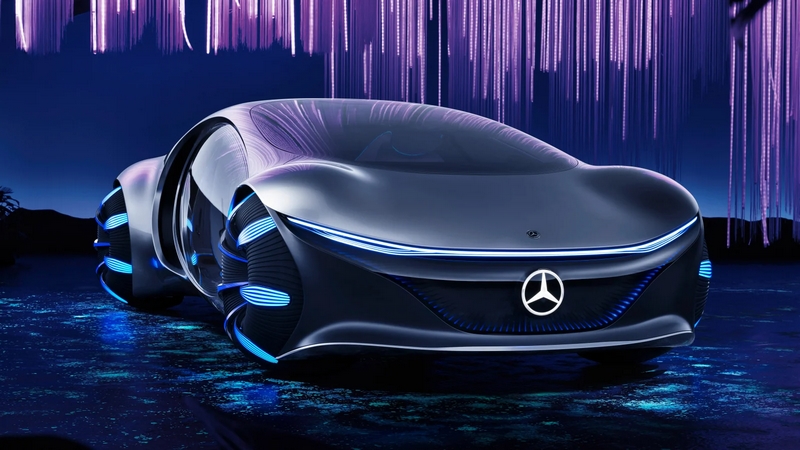 Avatar superfans have had it rough this last decade. With the sequels to the 2009 movie delayed time and time again, they’ve had vanishingly few opportunities to demonstrate their devotion to the world of Pandora. Sure, there’s an Avatar-themed park in Florida, featuring a boat ride and a food stand called Pongu Pongu, but otherwise pickings are slim. The Fox Movies online store only has seven items of official Avatar merchandise for sale and one of those – the Avatar napkin set – is sold out.

So thank v for Mercedes-Benz. For reasons you could never hope to understand, Mercedes recently unveiled the Vision AVTR, a concept car that has been directly inspired by the decade-old film. As part of the company’s Ambition 2039 initiative, which aims to make Mercedes “the most loved sustainable modern luxury automotive brand in the market”, the Vision AVTR was designed to show what driving will be like in the distant future.

Which you already know, because we’ll have had 30 years of driverless cars before the sea rises and the land is lost and whatever brittle scraps of humanity remain will be forced to drift around the planet on handmade rafts drinking their own urine like Kevin Costner in Waterworld. But Mercedes has a different idea. Mercedes apparently thinks that we’ll not only remain alive, but we’ll also be desperate to drive cars that look like a Mars Bar you’ve been carrying around in your back pocket all day.

Maybe I’m doing the car an injustice. Let’s hear what Mercedes’ Steffen Köhl had to say about the car: “There is a universe of shapes and creatures from the film’s universe that provoked us when we thought about the vehicle’s design. The spiral repeating lines from the Na’vi reflect the illumination of the multifunctional control element in the centre console that allows human and machine to merge.”

The centre console of the Vision AVTR seems to be the most important part of the car. Remember how in Avatar the blue people had to plug their hair into animals and each other if they wanted to go anywhere or experience sexual joy? The centre console is the car’s equivalent to that.

But there’s more. Köhl added: “The 33 bionic flaps on the back of the vehicle are reminiscent of scales from the dinosaur-like creatures from the film, and they move and breathe and live.”

But whatever you think of the car – which will almost certainly be “urgh” – you have to admit it’s a canny way to ramp up publicity for next year’s Avatar sequel. After all, Avatar was a film with a strong ecological message about how capitalism’s destruction of the environment caused unknowable physical and spiritual pain to those who lived in it. And Mercedes-Benz makes cars, which are one of the biggest sources of greenhouse gas emissions. That works, right…? No? Well, look, it’s either this or napkins. And the napkins are all sold out.