The Morgan Plus Four CX-T is a Morgan like you’ve never seen before, designed explicitly for overland adventure. Morgan has partnered with Rally Raid UK, renowned creators of Dakar race vehicles, for the project.

Morgan Plus Four CX-T opens up the possibility of routes, landscapes and destinations inaccessible by Morgan cars until now.

The Morgan Plus Four CX-T is the second of two special projects being produced by Morgan in 2021, with the first being the Plus 8 GTR. The introduction of the Plus Four CX-T also coincides with the announcement of Model Year 22 updates to the Plus Four and Plus Six, and helps to inform technical and aesthetic advancements for Morgan’s current and future range of vehicles. The Plus Four CX-T is on sale immediately, with all vehicles due to be built before the end of 2021.

The Morgan Plus Four CX-T is inspired by Morgan’s well documented history of competing in all-terrain endurance trials. As early as 1911, Morgan sports cars were competing and winning in trials competitions, and this spirit of adventure has been key to shaping the Morgan brand ever since. The more adventurous journeys that are frequently undertaken by Morgan customers all over the world have further fuelled the desire for Morgan to imagine the Plus Four CX-T car.

Following the launch of the Plus Four in 2020, Morgan partnered with Rally Raid UK, renowned creator of Dakar race cars, to jointly design and engineer the Plus Four CX-T. One of the aims of the project is to demonstrate the capability and durability of Morgan’s new CX-Generation platform, along with the Plus Four upon which the CX-T is based.

Just eight vehicles will be built, priced at £170,000 plus local taxes and supplied in full overland specification, with each customer having the opportunity to work alongside Morgan’s design team to specify their own CX-T. Every Plus Four CX-T is built at Morgan’s factory in Malvern, Worcestershire, before undergoing the final preparation and setup at Rally Raid UK’s own workshop facilities. Morgan’s design and engineering team have worked alongside Rally Raid UK throughout the programme to define the concept, specification, technical attributes, and aesthetic of the model. 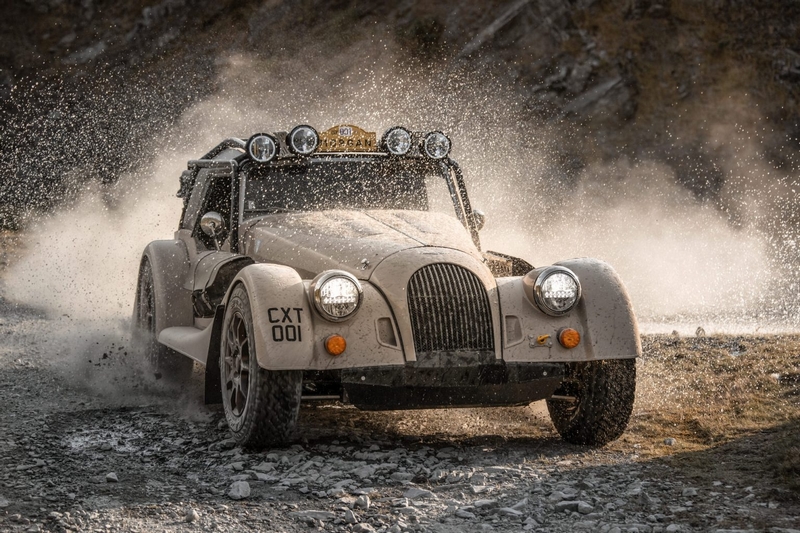 The exterior of the Plus Four CX-T is designed to maximise luggage and equipment carrying capacity, and provide the occupant protection
necessary for extreme environments. Simultaneously, Morgan has ensured that its visual design reflects this capability and purposefulness.

Most prominently, the rear panel of the vehicle has been replaced with an equipment rack, with unique side body panels designed to be reminiscent of the classic four-seater Morgan.

The external protective exoskeleton can also be adapted to carry leisure equipment such as bikes and surf boards, to compliment the lifestyle activities of the owner, while the removable side screens can be mounted onto the roof of the vehicle, allowing them to be carried unobtrusively in case of a change in weather conditions.

Rally Raid UK undertook a complete study of the standard Plus Four vehicle to determine the possibilities for the conversion. This study included durability assessments of the platform, drivetrain, and suspension systems.

“The Morgan design team has been conceptualising modern day trialling vehicles for many years. Around 18 months ago, our investors and CEO, Steve Morris, were in the studio and remarked how incredible it would be to bring one of these drawings to life. The project was unrestrained and born entirely from a desire to create an exciting British adventure vehicle. The CX-T, like many recent Morgan vehicles, demonstrates the flexibility of the Morgan design. For me, it’s a complete package: historical integrity, legitimate capability, and a brand-new adventure-lead aesthetic.” – Jonathan Wells, Head of Design, Morgan Motor Company. 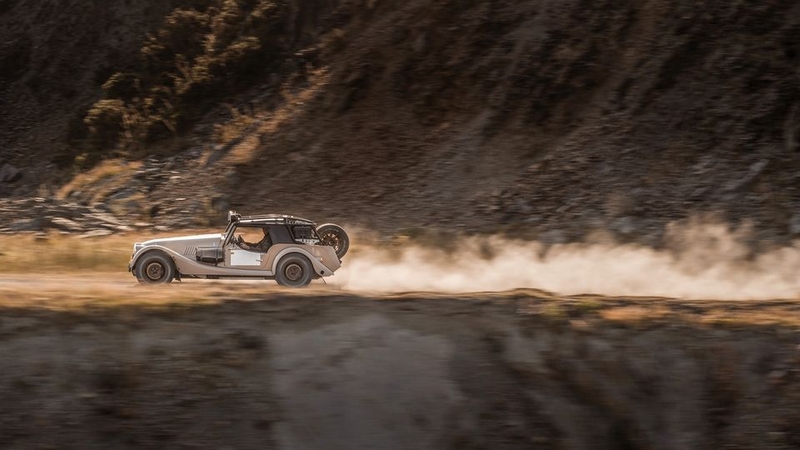 “Applying my experience of 13 Dakar Rallies, 60 Dakar vehicle builds and a lifetime of overland adventuring to an unconventional sports car such as a Morgan has been an interesting and rewarding project. Having the opportunity to design a car for such a prestigious marque has been a responsibility that I never imagined I would have. Rally Raid UK and Morgan have engaged with industry-leading suppliers to source the highest quality components, as well as designing a range of bespoke parts that will remain unique to the model. The Morgan Plus Four CX-T is a genuine overland adventure vehicle and I look forward to seeing the incredible destinations that owners will find themselves in.” – Mike Jones, Rally Raid UK.

In addition to the main suspension hardware, the lower suspension arms contain bespoke bushes which further increase durability. The combined suspension package is optimised to undertake journeys never before attempted in a Morgan sports car, while ensuring composure and comfort during any excursion into the back country.

A five-piece underbody protection system – comprising an engine guard, rear chassis guard, mid-section shield and rear undertray – helps to protect the chassis and important components from damage when driving in extreme conditions. The car is also fitted with a full bespoke exhaust system with rear side-exit that improves the departure angle and contributes to 230mm of ground clearance.

The Plus Four CX-T uses a BMW X-Drive electronic differential with bespoke software, calibrated and tested specifically for the application.

Switches inside the cabin allow a choice of three modes to be selected depending upon the driving conditions; each mode varies the degree of differential lock that is applied. 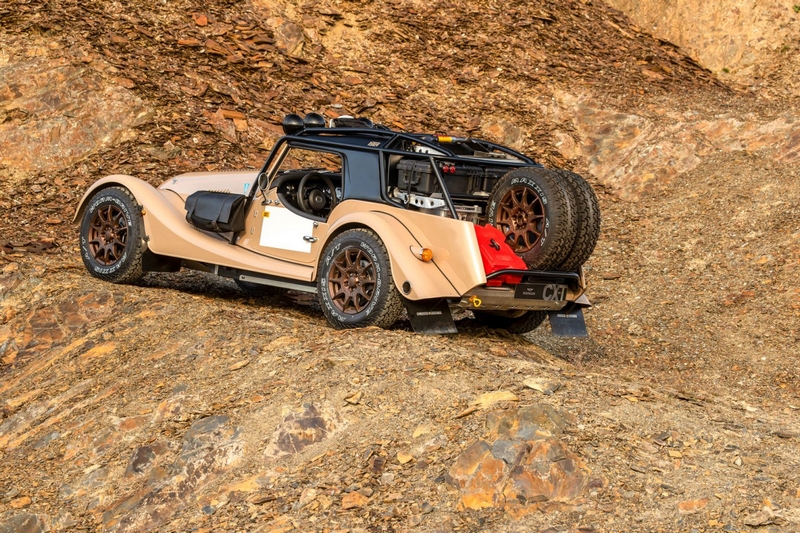 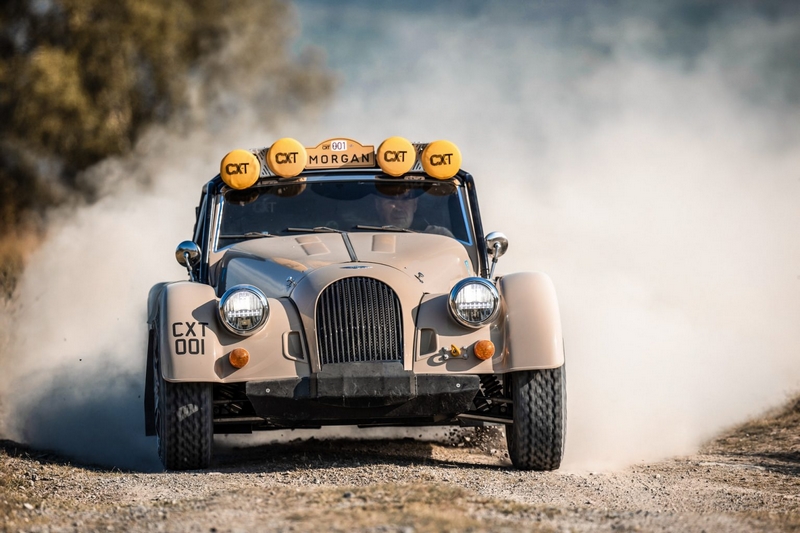 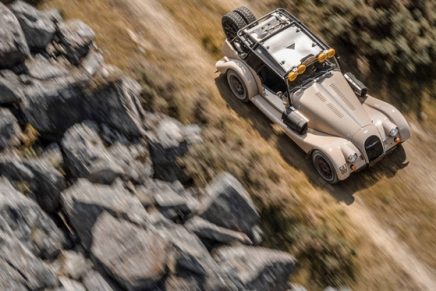 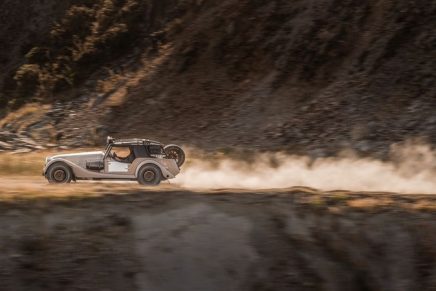 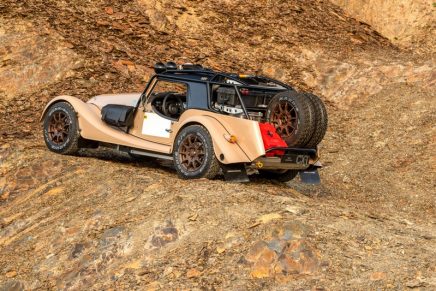 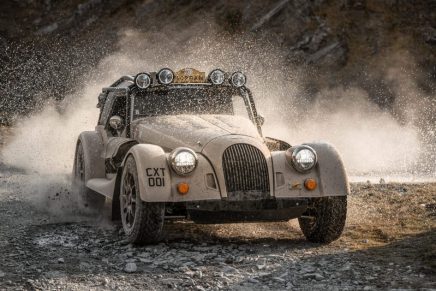 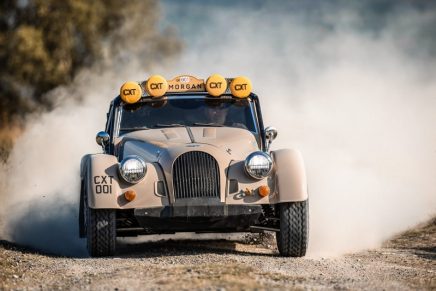