To be built in high tensile steel and aluminium, the 202m superyacht Centerfold by Nuvolari Lenard would have a colossal displacement of16,800GT and make use of the latest technology to deliver ecologically-sensitive low emissions when the surroundings call for them, or impressive speeds should the need arise. 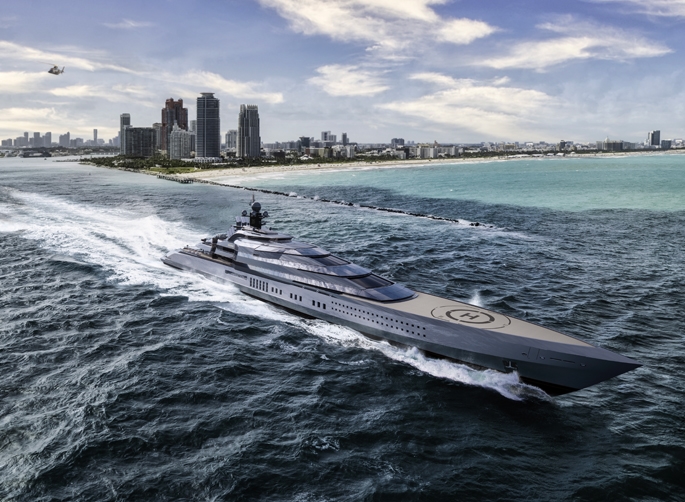 Beyond the yacht’s stunning features and remarkable proportions, which are entirely feasible and would make her one of the largest yachts ever built, CENTERFOLD has been designed to operate along a full spectrum of propulsion profiles.

Yacht owners will be able to modify the yacht’s operational modes to suit their surroundings and needs. The zero-emission, full-electric stealth mode is perfectly suited to cruising grounds with higher environmental sensitivity and stringent emissions regulations. Alternatively, the high-speed conventional propulsion mode delivers speeds of over 35 knots, driven by powerful 100,000hp engines. And of course, a number of modes in between will be available to adjust CENTERFOLD’s performance based on circumstances.

As a first in the yachting world, for CENTERFOLD Nuvolari Lenard has teamed up with eminent photographer and storyteller Jarmo Pohjaniemi to change the way the world sees superyachts. By informing the original design process and then introducing new perspectives and techniques to her imagery, Pohjaniemi and Nuvolari Lenard have enhanced the way this remarkable design is presented, bringing a level of artistry that is completely new to yachting. The result is a design that is more beautiful, evocative and accessible than has ever been seen on a superyacht before. 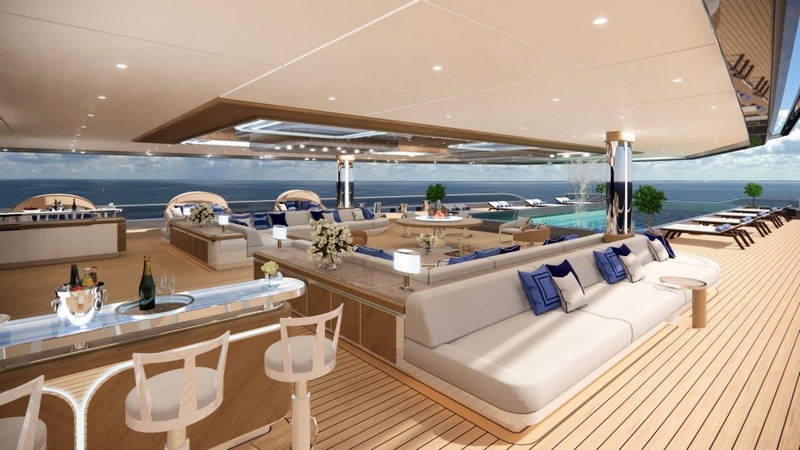 “In architecture, car design or sculpture, an object is first born from the mind of its creator, who portrays what they are visualizing. And if you are not lucky enough to be able to take in that building or piece of art in person, the next great way to experience it is through photography and videography. In this case, that object is presented to you through the eyes of the photographer, with their control of the light, the angles, the situation and so on. The photographer’s work is an extension – or an amplification – of the original creator’s process,” explains Dan Lenard.

“For our collaboration with Jarmo on CENTERFOLD, we inverted that creative process. Rather than waiting for him to capture the physical yacht with his lens, we invited him to work with us from the early stages of design, to exclusively manage the yacht’s beauty from his perspective as a world-class photographer. We created an initial yacht design that was beautiful to us, to our vision, and he then brought his refined professional eye and creative influence.

“This input was less about the physical shape of the yacht and more about how to best treat the surfaces for the most beautiful reflection of light, contrast and mirroring. Even down to the ambient environment of the design, which has been taken from Jarmo’s own landscape photographs to create the perfect backdrop. The process has parallels with a photographer styling the photoshoot of a supermodel, so the final image represents his creative vision for the unique beauty of the subject – whether a human model or a yacht design.

“This is something that has never been seen before in the superyacht world. We are not creating a design simply as a means to an end of that yacht being built; we are putting the maximum creativity into the design itself. It blurs the lines between yacht design and art, so that the enjoyment can be experienced by anyone who sees the images, not just the person who ultimately owns the yacht. You could say we are democratizing the enjoyment of superyachts through this process.” 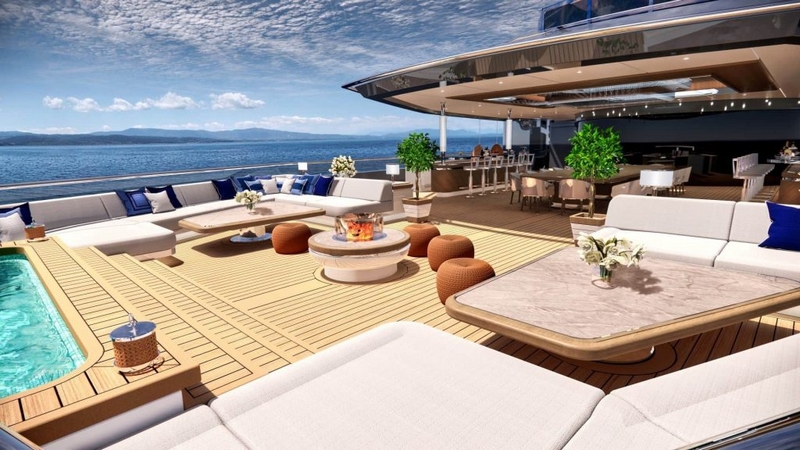 Although the internationally renowned photographer is best known for his work in the fashion and commercial arenas, Pohjaniemi has been drawn to the allure of the ocean and yachts for much of his career. He explains his attraction to the project:

“When I look at the ocean, I feel a power that draws me towards the horizon, and I have always sensed there was more beyond the shoreline that was calling my name. This oceanic fantasy became a reality when Dan Lenard invited me to collaborate in the development process of his newest project, CENTERFOLD. He asked me to create unique new visuals that would be executed to the same level of perfection as his design masterpiece. Our work creates the perfect harmony and balance between the yacht and the ocean, elevating them both simultaneously. It was a dream project for any visionary, as I was able to explore the highlights, contours and shadows in my creative process.

“CENTERFOLD is a fantastic playground and, in my opinion, one of the most beautiful superyachts ever designed. She is not the Centerfold of the Month, she is the Centerfold of the Century; the main attraction. I feel privileged to have been able to capture her pure essence in the most beautiful light and surroundings; the only place that is fitting to call her birthplace.” 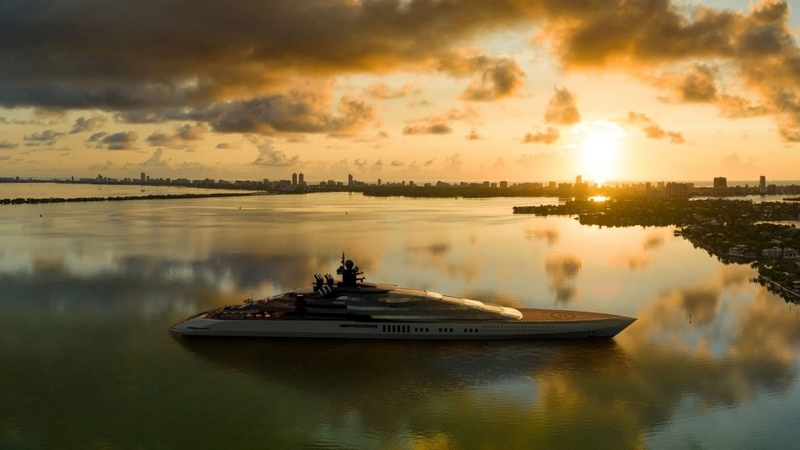 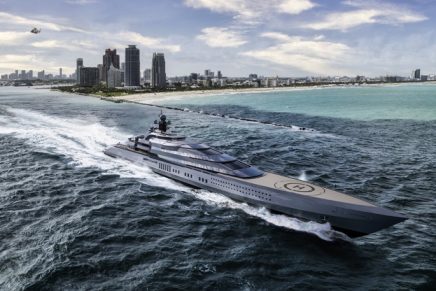 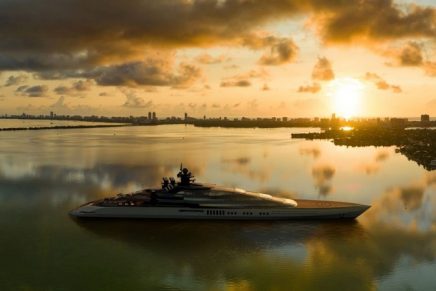 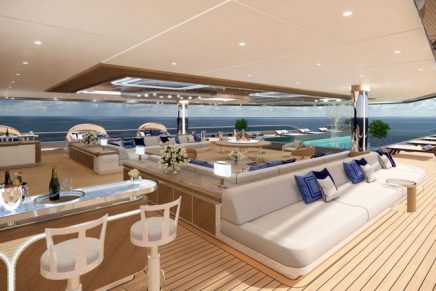 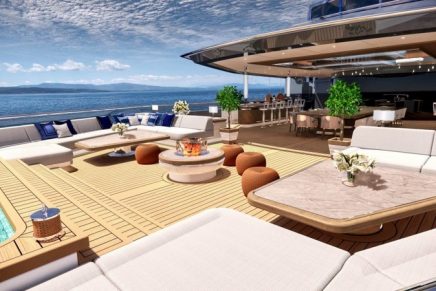