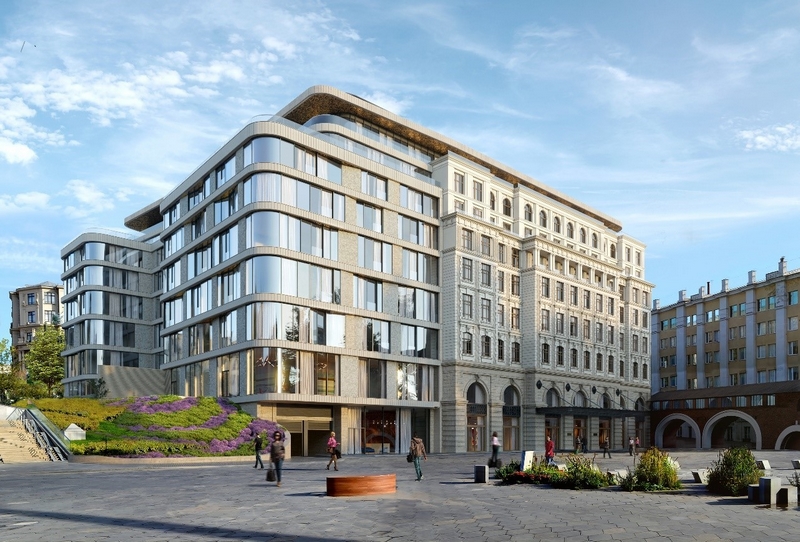 A new luxury hotel to be located in the very heart of Moscow. The hotel’s unique location and legendary Raffles service will make it one of the most exciting openings of 2022.

The flagship hotel, located next to the Kremlin, will be managed under the prestigious Raffles Hotels & Resorts brand and is expected to open in the second half of 2022, becoming the first Raffles hotel in Russia.

A multi-faceted hotel and residential complex in the historical Varvarka Street in Moscow, Russia.

An unprecedented 64 thousand square meters “urban oasis” will be located at the meeting point of iconic city park Zaryadye, the historical Varvarka Street and Slavyanskaya Square. The breathtaking views offered from the property will feature Red Square, Kremlin ensemble including the picturesque Cathedral of Vasily the Blessed and sights of Moscow’s historical district. Guests will have direct access to the city’s most modern park, Zaryadye, as well as the nearby concert hall.

Throughout the initial concept design and delivery of the Raffles Moscow project, it has been essential to maintain and preserve the historical character of surrounding facades, a leading design and development principle of the Raffles brand. British design studio Winch has developed the design of the hotel in collaboration with Accor’s luxury design team.

Raffles Moscow will embody all the hallmarks of sophistication, luxury, service and timeless ambience associated with the Raffles luxury hotel brand.

This landmark Raffles in Russia will offer 153 exquisite rooms, located over nine floors, including 20 two- bedroom suites, 19 junior suites and two luxurious Presidential suites, each featuring two bedrooms and a spacious outdoor terrace with an impressive area of 350 sqm and 420 sqm respectively. All Raffles Moscow guestrooms boast breathtaking views over the city, including four rooms with exclusive access to the green outdoor terrace of the hotel’s iconic courtyard.

The future Raffles Moscow hotel will be a true city landmark.

The spectacular building features a grand entrance through a historical arch, a unique mosaic outdoor courtyard, a SPA center with a real Russian bath and multiple thermal zones, a fitness center and 25-meter swimming pool, beauty salon services and outstanding facilities for special events and business meetings, as well as an exclusive shopping gallery.

Raffles Moscow will feature five haute dining restaurants including three signature chef restaurants and a Ladurée bakery run by the famous Russian restaurateur, Alexander Rappoport. Complementing the restaurants will be the legendary Raffles Long Bar, which dates back to the first Raffles hotel in Singapore, home to the famous “Singapore Sling” cocktail. The emblematic bar concept, a standard of the “golden age of travel”, is a key marker for the brand and a prominent feature in Raffles hotels around the world.

One of the main features of Raffles Moscow will be a spacious event center, featuring a 730 sqm Grand Ballroom, four meeting rooms between 47 sqm and 83 sqm, and an open outdoor event area.