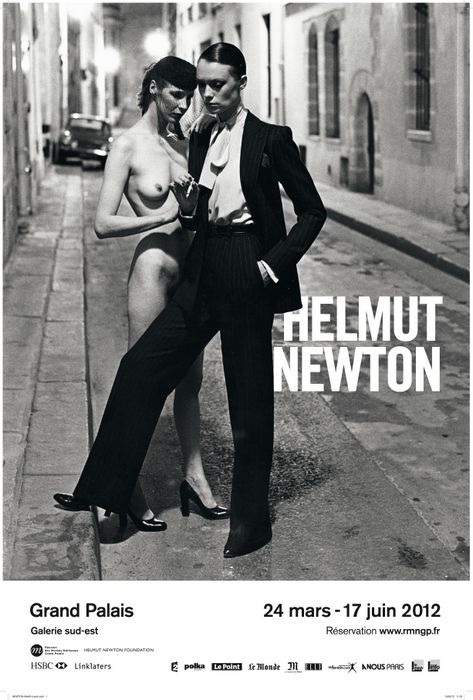 The newly restored South-East gallery of the Grand Palais in Paris hosts the first retrospective of the work of one of the world’s most famous photographers – Helmut Newton.Conceived by June Newton, alias Alice Springs, Newton’s wife and a photographer herself, the exhibition (24 March 2012 – 17 June 2012) traces the great themes from the imagination of Helmut Newton (1920 – 2004).

The exhibition brings together more than two hundred photographs, mostly original or vintage prints made under Helmut Newton’s supervision: Polaroid, working prints in various sizes, monumental works. It is supported by press records, and a film made by June Newton: “Helmut by June”.

In this documentary the photographer said: “The perfect fashion photo should look like something out of a movie, a souvenir shot, a paparazzi shot — anything but a fashion photograph.”

Through the major themes in his work: fashion, nudes, portraits, sex and humour, the exhibition seeks to show that Newton was much more than a fashion photographer. His photography shook off all constraints, even though he often worked within the rigid framework of fashion and portraiture.

“You can see all the facets of Helmut, every single photo tells a story,” June Newton told a press conference.

“Helmut Newton did what no photographer before him dared to do. He broke taboos, he broke the forms, the codes of photography. The aim here is to show Newton as a great classical artist, with a full, complex place in the history of art,” said the co-curator Jerome Neutres.

“Newton’s nudes are like statues. They should be set alongside nudes by Velasquez, or the Olympia by Manet — not Penthouse,” said Neutres.