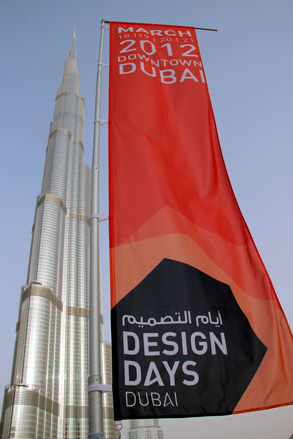 In front of the Burj Khalifa, the world’s tallest building, Design Days Dubai gathered a total of 22 galleries from around the world. The four-day inaugural edition of Design Days Dubai, the Middle East’s and South Asia’s first fair dedicated to collectible and limited edition design, attracted over 8,500 visitors. As an integral part of Art Week ( the umbrella initiative that includes Art Dubai, Design Days Dubai and Sikka), the fair coincided with the contemporary art fair Art Dubai, marking the maturing of the arts scene in the region.

In addition, a number of key players from that have established their presence in Dubai’s design industry showcased their unique collectibles at Design Days Dubai. They include: The Carpenters Workshop Gallery, which was listed in the Power 100 of Art + Auction;
Downtown Laffanour (Paris); Nulifar (Milan); Seomi; Priveekollektiea and so on. Browse the fair’s website and blog for a complete picture of exhibitors.

Strong sales were reported by some galleries, wrote Wallpaper magazine, and others spoke about the importance of bolstering their contacts in the Middle East, but the pervading feeling at the fair was of an eagerness for creative ‘newness’.