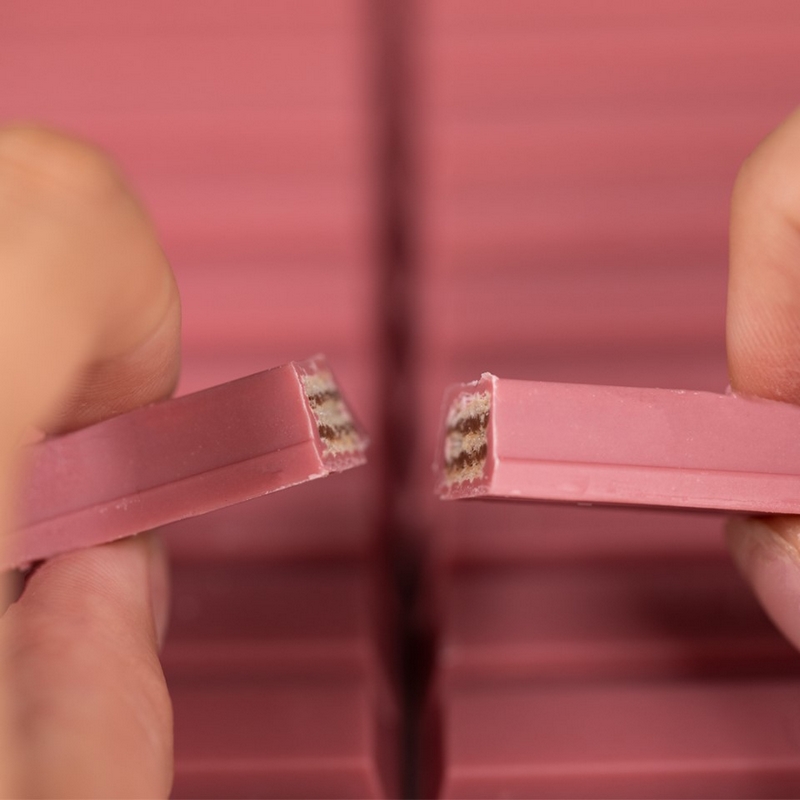 This article titled “Nestlé launches made-to-order luxury KitKats for £14 a bar” was written by Zoe Wood, for theguardian.com on Monday 23rd September 2019 07.02 UTC

We used to be content just nibbling milk chocolate off KitKat fingers, but soon Britons will be able to snack on a “luxury handcrafted” version – for up to £14 a bar – as the tea-break staple gets a gourmet makeover.

Bespoke KitKats are expected to be one of this year’s must-have Christmas presents after its owner, the food giant Nestlé, revealed the upmarket KitKat Chocolatory range.

Either via a dedicated website, or by visiting a pop-up stall in John Lewis’s flagship London store, shoppers will be able to order a custom KitKat from nearly 1,500 possible flavour combinations. The ingredient choices include rose petals and cocoa nibs and there is the option to coat the fingers in ruby chocolate. It has also produced “special edition” flavours – a surprising line-up that includes marmalade, Earl Grey and “whisky & ginger”.

Related: ‘It smells like a Lush store’: taste-testing the ruby KitKat

Cheryl Allen, who heads KitKat in the UK, said it was a good time to try something new because there was a lot of “buzz” around brand following Instagram-friendly updates such as matcha green tea flavour and ruby chocolate that appealed to younger consumers.

“KitKat was launched in the 1930s and one of the reasons it has endured for so long is because it has been able to evolve,” said Allen. “These are luxury, handcrafted chocolates and I think it will positively surprise people how far you can stretch this brand.”

But a luxury KitKat comes with a luxury price tag. The 150g eight-fingered bespoke bars – which will be made to order in Yorkshire – cost £14 (a 41.5g four-fingered KitKat usually costs 65p). The special editions start at £7.50.

“We are very clear that the bulk of our [chocolate] business remains in the mainstream,” said Allen. “This is a differentiated and premium product that is made to order.”

Consumers are gravitating towards craft products, a shift that has created a market for posh versions of everything from mixer drinks to gin and beer. The same trend is obvious in confectionery where incumbents are being forced to rethink their models as fast-growing companies such as Hotel Chocolat bring luxury chocolate to the high street. This is the first time Nestlé’s confectionery arm has launched a direct to consumer business in the UK.

Nestlé has borrowed Chocolatory from Japan where it already runs KitKat boutiques under that name. What is a popular tea dunker in the UK is a different biscuit in Japan where it has an upmarket image. It is a popular good luck present (the name resembles kitto katsu which means “you will surely win” in Japanese) and since the millennium more than 300 flavours, including sake, edamame bean and wasabi, have been developed for the gift-giving culture.

With customised gifts also a huge trend – named jars of Marmite and tins of Quality Street have been big Christmas hits in recent years – it is also possible to put a message on the KitKat box.

John Lewis gift food buyer Rachel Costello predicted they would be popular stocking fillers: “I think our customers will love these exciting new flavours and the experience of making their own KitKat.” A pop-up shop will open in its Oxford Street store on Thursday, and a second will open at Manchester Trafford Centre on 1 October. It is also stocking special edition Kitkats in 30 shops.