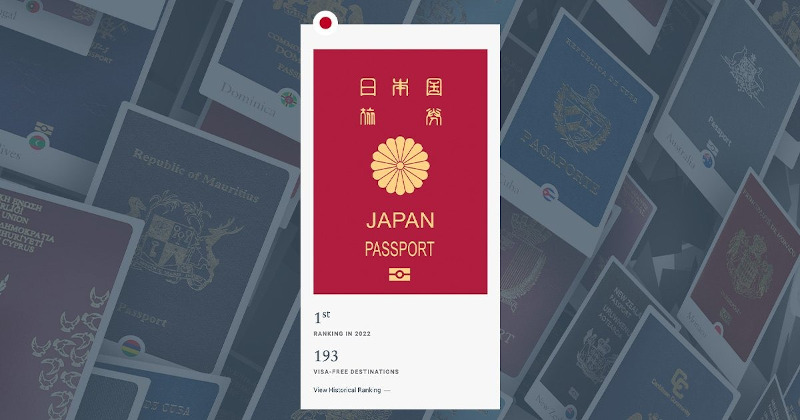 The World’s Most Powerful Passports have the Least Travel Freedom

By comparing the current level of travel freedom with the most severe Covid-related restrictions imposed over the past few years, the results from the Henley Passport Index, which is based on official data from the International Air Transport Association (IATA) show that the world’s most powerful passports have the least travel freedom.

Passport holders with the greatest global access are currently the most restricted and reluctant to enjoy their travel freedom, according to the latest results from the Henley Passport Index, which is based on exclusive and official data from the International Air Transport Association (IATA). Japan holds the number one spot on the index — the original ranking of all the world’s passports according to the number of destinations their can access without a prior visa — with a record-high visa-free or visa-on-arrival score of 193, while Singapore and South Korea come in joint-2nd place, with a score of 192.

But despite the record-breaking worldwide access afforded to citizens of these three nations over the index’s 17-year history, international passenger demand in the Asia-Pacific region has only reached 17% of pre-Covid levels, according to IATA’s latest statistics, having hovered below 10% for most of the past two years. This figure is far behind the global trend where markets in Europe and North America have recovered to around 60% of pre-crisis travel mobility levels.

Commenting in the Henley Global Mobility Report 2022 Q3, Dr Marie Owens Thomsen, Chief Economist at IATA, says passenger numbers should reach 83% of pre-pandemic levels in 2022: “By next year, many markets should see traffic reach or exceed pre-pandemic levels, while we expect this to be the case for the industry as a whole in 2024.”

EU member states dominate the remaining top 10 ten spots on the latest ranking, with Germany and Spain in joint-3rd place, with access to 190 destinations visa-free. Finland, Italy, and Luxembourg follow closely behind in joint-4th place with 189 destinations, and Denmark, Netherlands, and Sweden share 5th place with their passport holders able to travel to 188 destinations worldwide without a visa.

Both the UK and US have dropped down a rank, to 6th and 7th place, respectively, and Afghanistan remains at the bottom of the index, with its nationals only able to access 27 destinations worldwide visa-free. The global mobility gap between the world’s most and least powerful passports now sits at an unprecedented 166 destinations. 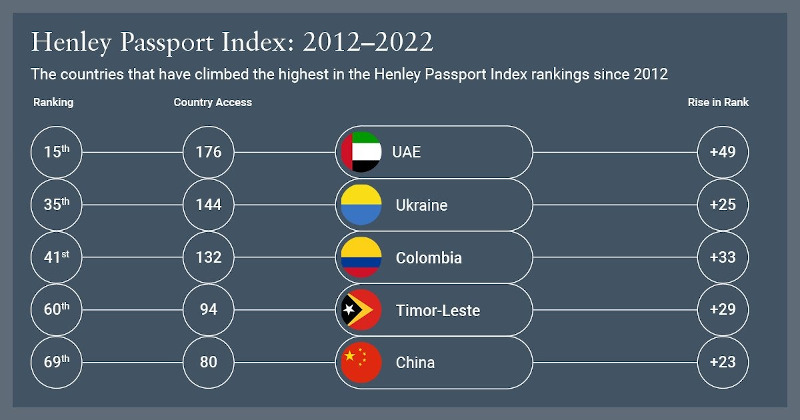 As US travel chaos begins to ease following the Fourth of July holiday weekend, strikes and staff shortages are forcing airlines across Europe to cancel thousands of flights, causing hours-long queues at major airports. Heathrow Airport has even told airlines to stop selling summer tickets as the UK’s biggest airport struggles to cope with the rebound in air travel.

Dr Christian H. Kaelin, Chairman of Henley & Partners and the inventor of the passport index concept, says the recent surge in demand is hardly surprising: “The latest results are a heartening reminder of the very human desire for global connectivity even as some countries move toward isolationism and autarky. The shock of the pandemic was unlike anything seen in our lifetimes, and the recovery and reclamation of our travel freedoms, and our innate instinct to move and migrate will take time.”

Russian passport holders are more cut off from the rest of the world than ever before, as sanctions, travel bans, and airspace closures limit Russian citizens from accessing all but a few destinations in Central Asia and the Middle East. The Russian passport currently sits at 50th place on the index, with a visa-free or visa-free on arrival score of 119. However, due to airspace closures in EU member nations, Australia, Canada, Japan, New Zealand, South Korea, the US, and the UK, Russian citizens are effectively barred from traveling throughout most of the world, with the marked exceptions of Istanbul and Dubai, which have become focal transit points.

Conversely, the Ukrainian passport is currently ranked in 35th place on the index, with holders able to access 144 destinations around the world without needing a visa in advance. Ukrainians displaced by the invasion have also been granted the right to live and work in the EU for up to three years under an emergency plan in response to what has become Europe’s biggest refugee crisis this century. After the European Council’s recent, ground-breaking announcement awarding Ukraine candidate status, the first step towards full EU membership, the travel freedom for Ukrainian passport holders is likely to increase even further in the coming years. 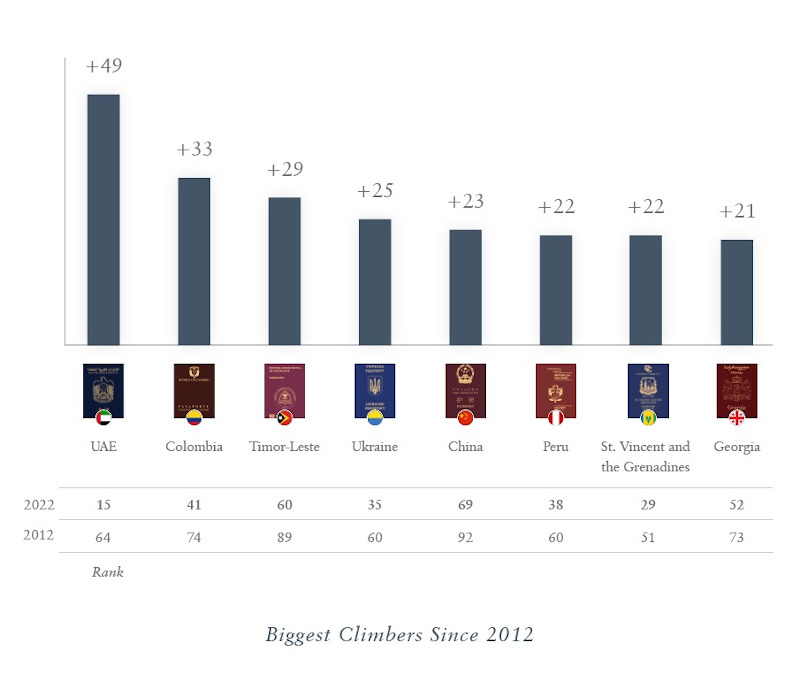 Throughout the turmoil of the past two years, one thing has remained constant: the growing strength of the UAE passport, which now sits at 15th place on the ranking, with a visa-free or visa-on-arrival score of 176. Over the past decade, the country has made unparalleled gains as the biggest climber on the index — in 2012, it sat at 64th place on the rankings, with a score of just 106. As the latest Henley Private Wealth Migration Dashboard demonstrates, the UAE has also become the focus of intense interest among affluent investors and is expected to see the highest net influx of HNWIs globally in 2022, with a forecast net increase of 4,000 — a dramatic increase of 208% versus 2019’s net inflow of 1,300 and one of its largest on record.

Unique research conducted by Henley & Partners comparing a country’s visa-free access with its Global Peace Index score shows a strong correlation between a nation’s passport power and its peacefulness. All of the nation’s sitting in the top ten of the Henley Passport Index can also be found in the top ten of the Global Peace Index. Likewise, for the bottom ranking nations.

Commenting on the results in the Henley Global Mobility Report 2022 Q3, Stephen Klimczuk-Massion, Quondam Fellow of Oxford University’s Saïd Business School, says: “Your passport is more than ever a calling card, which, depending on which passport you carry and where you are going, will have an impact on the kind of welcome you will receive, where you can go and how safe you will be when you get there. Now more than ever, it’s a mistake to think of a passport as merely a travel document that allows you to get from A to B. The relative strength or weakness of a particular national passport directly affects the quality of life for the passport holder and may even be a matter of life and death in some circumstances.” 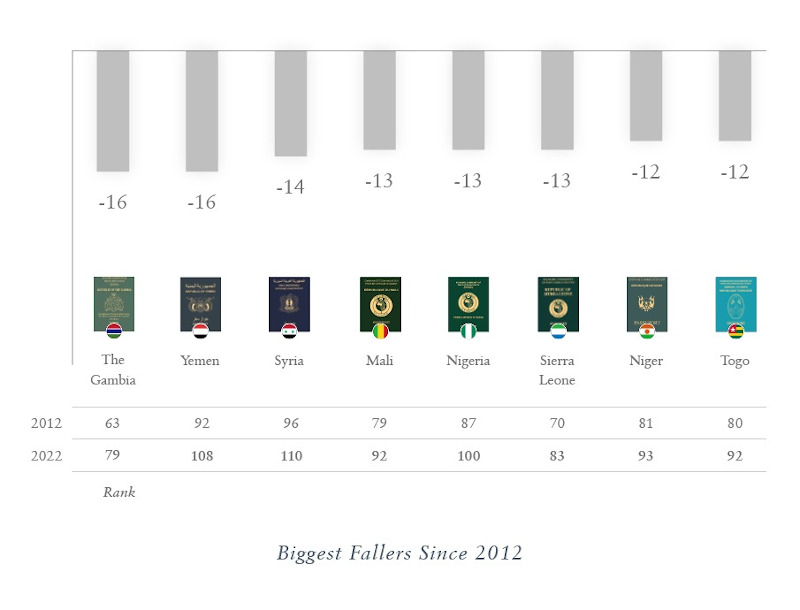 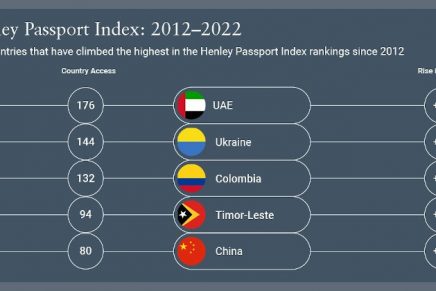 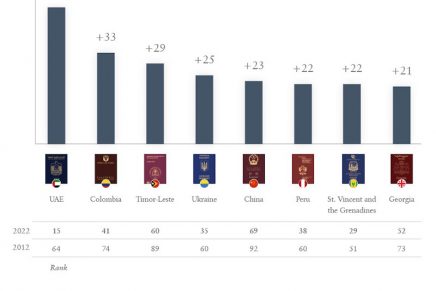 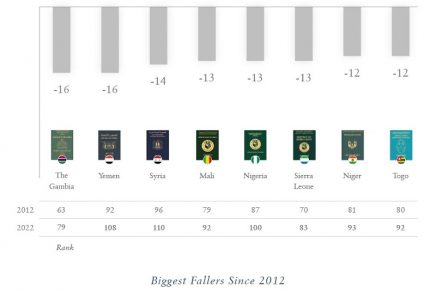 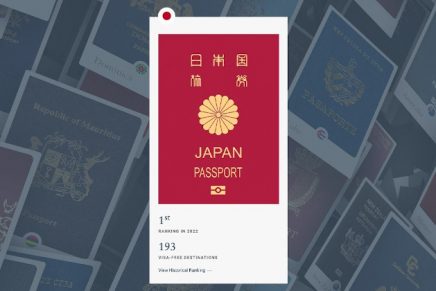