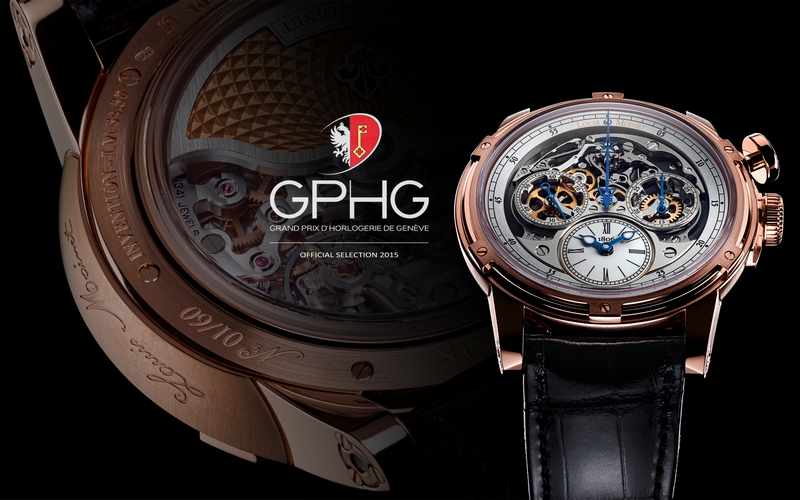 The inspirational master watchmaker Louis Moinet (1768 – 1853), the true inventor of the chronograph (1816) and the creator of some extraordinary clocks for Napoleon Bonaparte, Tsar Alexander Ist, American Presidents Thomas Jefferson and James Monroe, or King George IV of England, was one of the greatest watchmakers of Europe. The Louvre Museum in Paris, Château de Versailles, or the Palazzo Pitti in Florence display Moinet‘s clocks and inventions, considered unrivalled masterworks of Haute Horlogerie.

The life force of Louis Moinet lives on thanks to Jean-Marie Schaller who, as the founder of the Louis Moinet brand, revived the name of the erudite watchmaker and the philosophy of limited edition mechanical art. 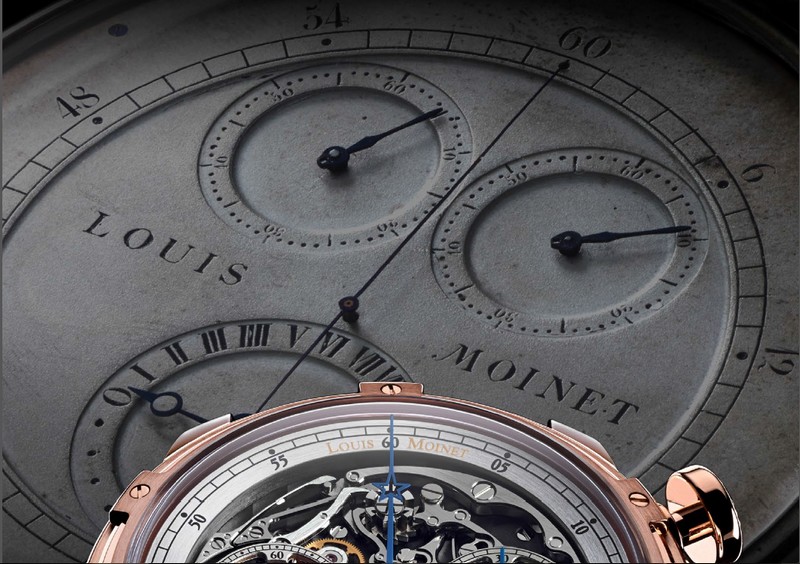 The two centenaries since the invention of the chronograph are marked by Swiss independent watch Maison Louis Moinet with the first chronograph-watch in history, unveiled at this year’s Baselworld fair. Called “Memoris,” a bridge in time between Louis Moinet’s heritage and the creative force of modern Louis Moinet Ateliers based in Saint-Blaise (Switzerland), the new revolutionary watch pays tribute to an enduring legacy and celebrates Louis Moinet Atelier’s 10th anniversary. 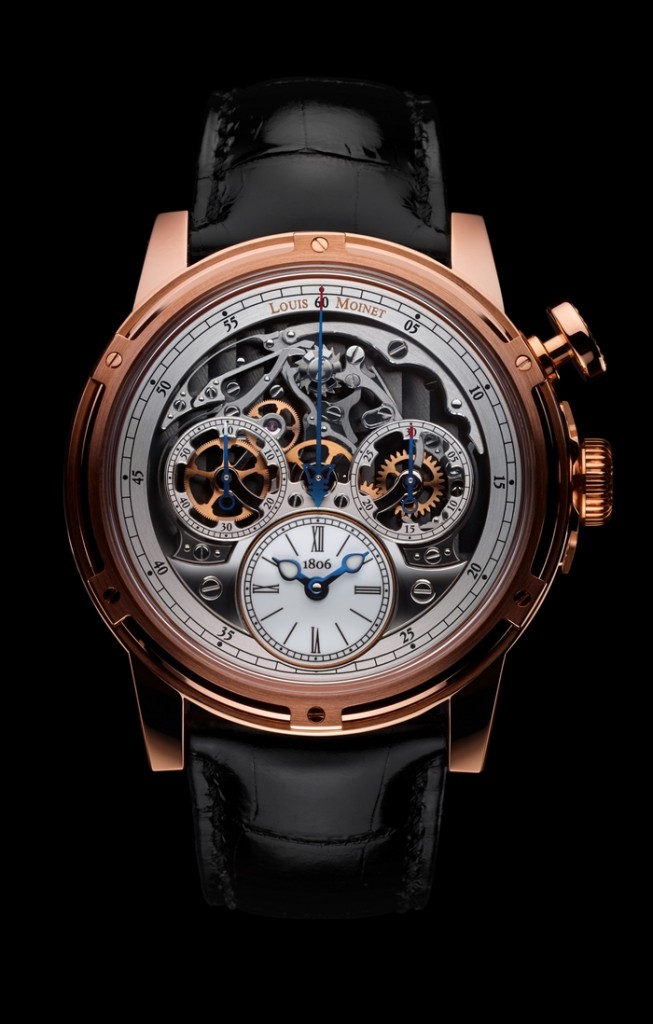 In the universe of chronographs, the inventions occur pretty rarely, but in this case we talk about some milestones and inventions. A world’s first, the chronograph here is not seen as a complication, but as the primary function of the timepiece. “Time” debuts as a complication. Brilliant concept, isn’t it?

It is no wonder, the limited edition watch produced in three 60-piece numbered series (in 8K pink gold, 18K white gold rhodium-plated mainplate, and 18K white gold-blued mainplate) is nominated for the 2015 Grand Prix d’Horlogerie de Genève (GPHG), probably the most prestigious event celebrating the 12th
Art. Louis Moinet Memoris has all the chances to be proclaimed the winner of the “Chronograph” award this year. Memoris’ dial is a micro stage for a complex and intricate dance of all chronograph functions. 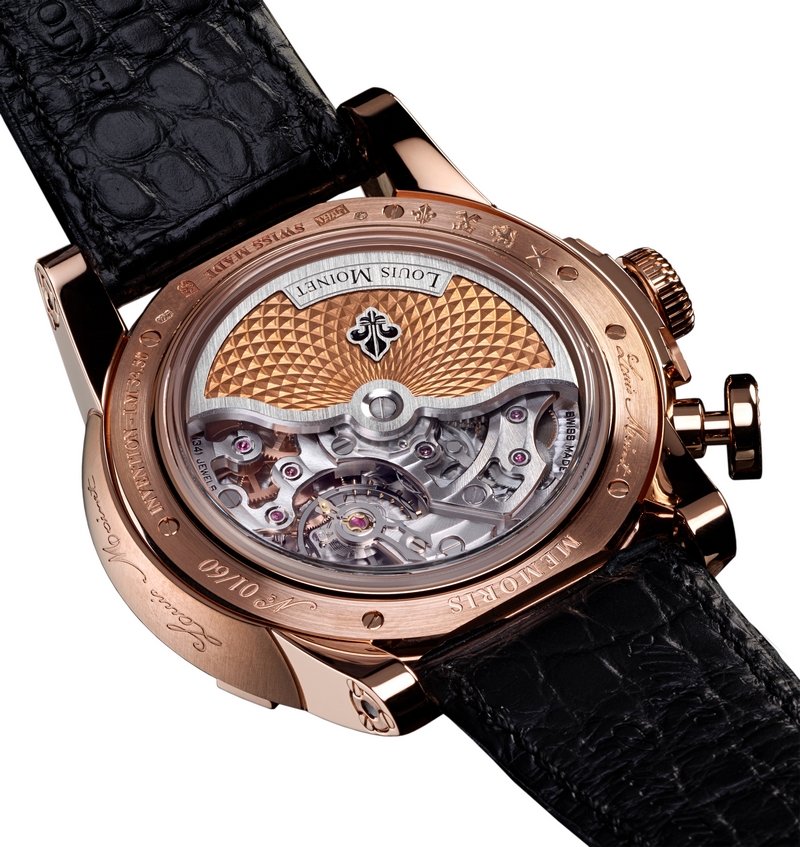 Practically re-imagining the chronograph function, the new monopusher chronograph with column wheel, 34 jewels, 302 components and a 48-hour power reserve is reconciling a trio of essential aspects like the upper plate location, a fully integrated chronograph without add-on modules, and a design revealing every segment of the watchmaking jewel.

“To create the first ever chronograph-watch, we have come up with an entirely new concept. This involved thinking about the chronograph before considering the watch. This new approach is fundamentally different, making Memoris a genuinely unique, innovative creation. To bring it to life, we had to create over 300 components for the movement, and over 50 for the case alone,” explained Jean-Marie Schaller, CEO & Creative Director Louis Moinet.

In order to make the Memoris chronograph fully visible, all the wheels were tailor-made to offer perfect functioning and an unrivalled aesthetic appearance. The dedicated mechanism plate became a reality with 147 parts separating the chronograph from the LM54 automatic movement (28,800 vibrations per hour (4Hz). As Louis Moinet manufacture recalls, the most delicate part of the Memoris building was setting the yoke. Finally, the right one offered the desired “clean start, a precise reset, and a gentle, linear progression.” 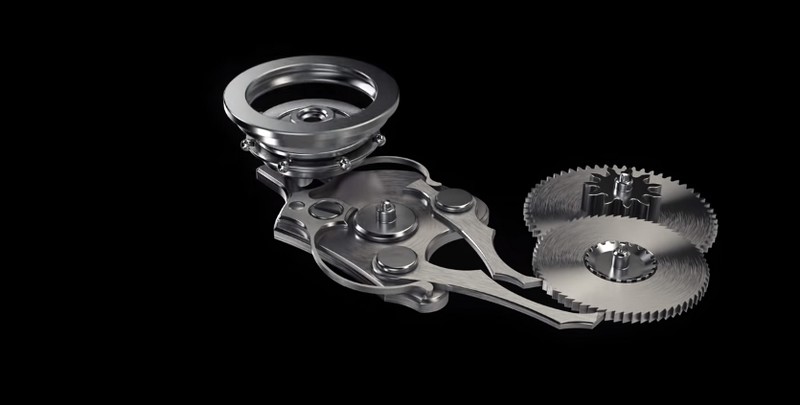 Another unique system feature of the Memoris is the winding system allowing the watch to be wound up in both directions. Called “Energie Plus”, the ‘crab claw’ design increases the efficiency of the automatic wind by 30 percent. To understand how this ingenious system is providing substantial efficiency, feast your eyes on the redoubtable Memoris’ crab claw in motion (watch the video).

To present the new 46 mm Memoris chronograph in all its glory, Louis Moinet redeveloped the whole “habillage” of the timepiece. This translates into a new approach to the casing, new hands, a new dial, a new oscillating weight, and a new folding clasp, among other additions. The gold case with a screw-on transparent case back is equipped with 52 individual components, including screwed-in decorative Black zircon synthetic gemstones. 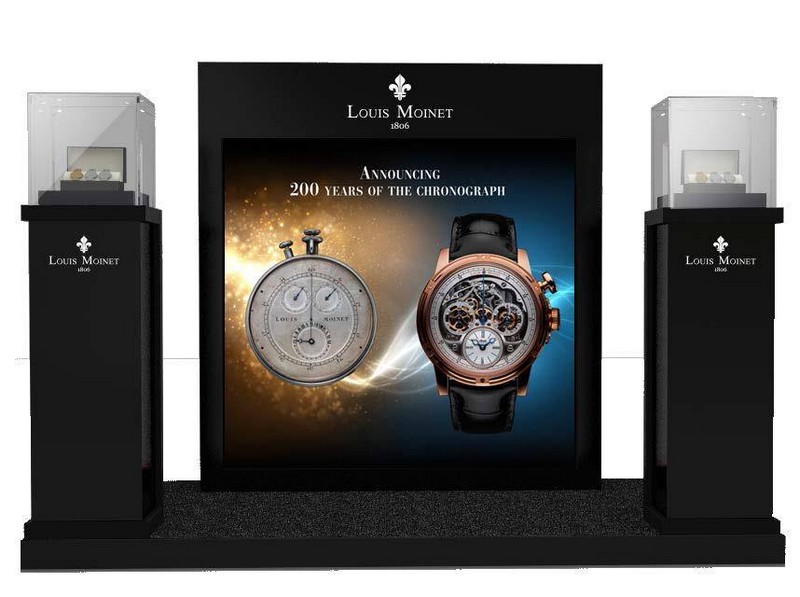 From October 18th to 22nd 2015, Memoris, the crowning glory of Louis Moinet’s first decade, was on display at the first edition of the Dubai Watch Week, a travelling exhibition presenting the watches preselected by the jury and in the running for the “Aiguille d’Or” Grand Prix. From October 27th to November 4th, the timepieces of the 2015 Grand Prix d’Horlogerie de Genève, including Memoris, will be presented at the Cité du Temps in Geneva. The roadshow’s final stop for the winning watches of this 15th edition of the GPHG will be SalonQP exhibition in London from November 12th to 14th 2015. 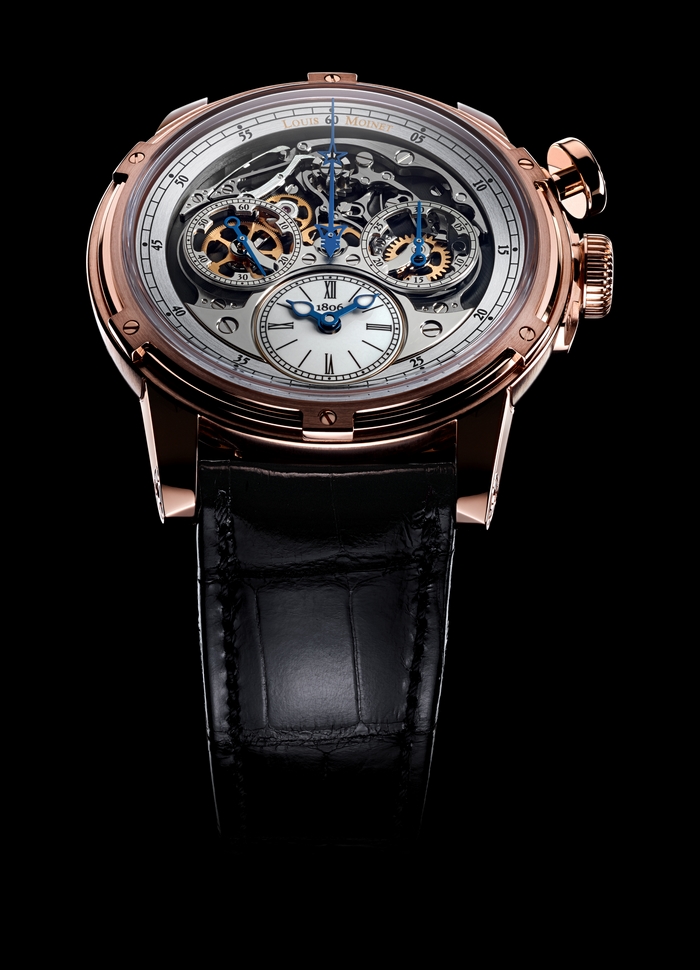 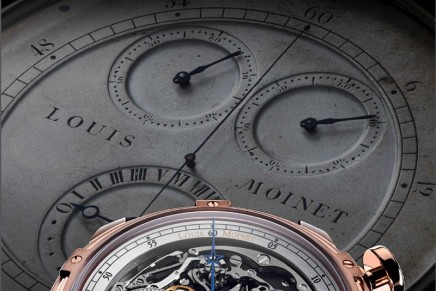 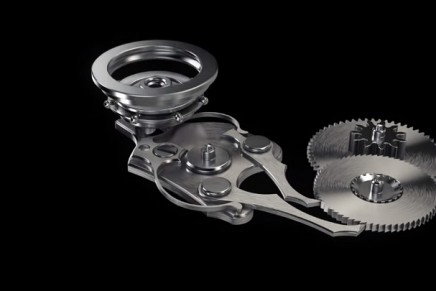 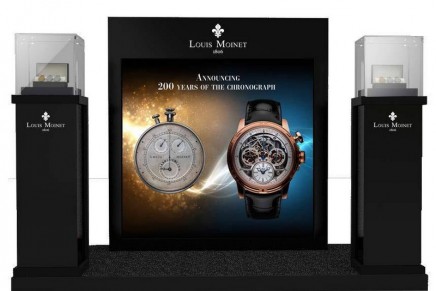 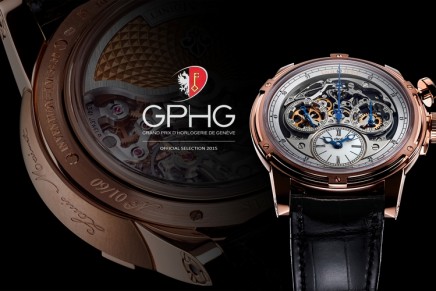 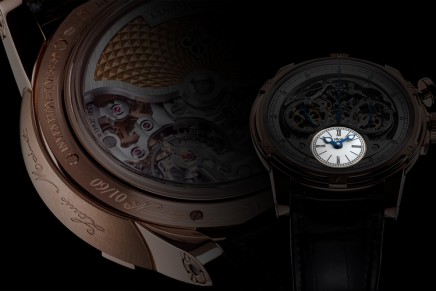 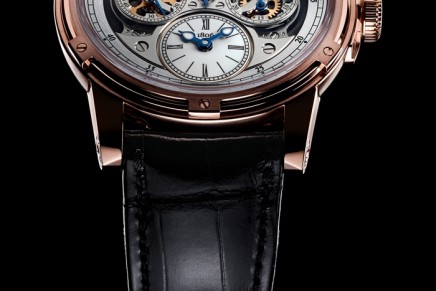 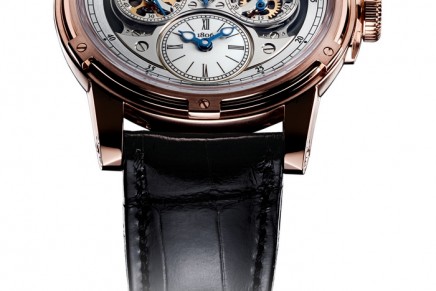 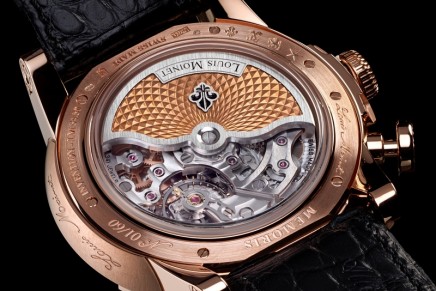 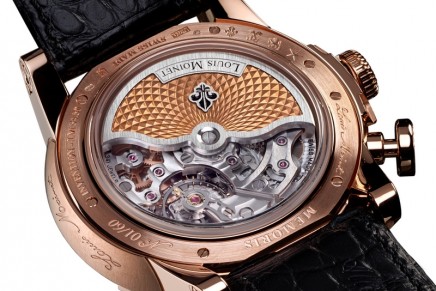 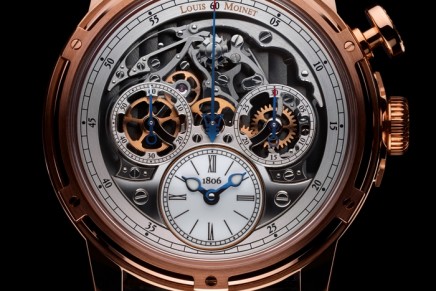