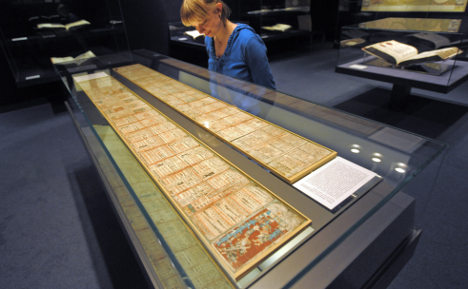 The famous Dresdner Codex, one of the original Mayan books that set the end of the Mayan calendar on December 21, 2012, went on display in Dresden on Friday as part of an exhibition on the apocalyptic prophecy.

The 78-page book, also known as the Codex Dresdensis, which has been in the eastern German town since 1739, is being exhibited for the next few months in the Book Museum of the Saxon State Library, informs thelocal.de

The codex consists of 39 leaves made of bark, each around 20 centimetres long, encased in wooden lids and wrapped in jaguar hide. It is thought to have been written and illustrated in several phases the 13th century – when the high period of Mayan culture had already been dead for at least four centuries – by up to eight authors.

Eventually, researchers used the Dresdner Codex to determine that the end of the 13th Mayan calendar cycle would fall on December 21, 2012. This date is illustrated in the book with the image of a giant crocodile spewing water from its mouth.

Sven Gronemeyer, a researcher of Mayan culture from North Rhine-Westphalia said last year that his decoding of an old stone tablet referencing 2012 has shown that the Native American civilization merely expected the return of one of their gods on that date.