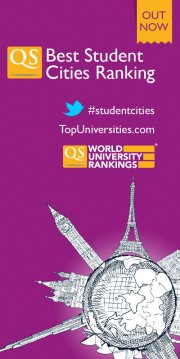 Paris topped the inaugural Best Student Cities table, which ranks cities according to measures taken from “public information, population sizes, number of educational establishments and their quality, as judged by the QS World University Rankings.

Based on a complex set of measures taken from public information, surveys and data submitted as part of the QS World University Rankings, the results provide a new way of comparing the best cities around the world in which to be a student.

Unlike London and Boston, Paris does not have a global top 30 university, so it may come as a surprise to some that it ranks as the top city in the world for international students. But consider this: Paris has 16 institutions in the QS World University Rankings, comfortably more than any other city on the planet; international tuition fees are a fraction of those in the UK, Australia and North America; situated in the heart of Europe, Parisian graduates are targeted by a vast range of employers throughout the continent; and perhaps most importantly for students, all of this takes place in one of the most historic, culturally vital and beautiful cities imaginable. There’s a reason why Paris is the most visited city in the world.

Elite Parisian universities such as ENS Paris, Ecole Polytechnique, Sciences Po and the Sorbonne have produced some of the most important philosophers, theorists, scientists, and mathematicians of the last 100 years, not to mention seminal movements in literature, film and art. Students often enjoy extensive access to leading academics, with small class sizes and intensive teaching belying the universities’ low tuition fees. Paris is frequently rated as one of the most liveable cities in Europe, and it scores highly in the quality of living indicator. Perhaps the only real drawback for students is that socializing in Paris can be a costly affair – but then it’s also a city that excels in the things that come for free.