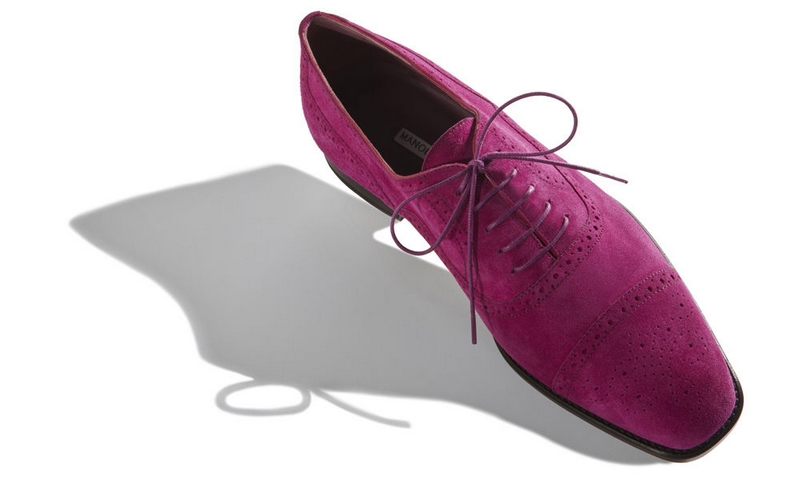 This article titled “Manolo Blahnik: ‘Beauty is what matters to me’” was written by Eva Wiseman, for The Observer on Sunday 8th July 2018 06.00 UTC

It’s the end of our hour together, and Manolo Blahnik is walking me out, through the grand hallway of his offices in a Georgian townhouse, when a rare silence falls over him. He is watching a courier deliver a parcel. The man has braids that are tightly bound into a green bandana that matches his uniform, and he hands over the little signy machine to an assistant with a jaunty half-bow. Blahnik is transfixed. As the door closes behind him, Blahnik allows himself a small gasp of delight, his eyes wide behind tiny tortoiseshell glasses. “Style!” he squeaks. “Everywhere!”

Admiring men’s style is a new hobby for Mr Blahnik, now 75 and so established as a women’s designer that, like Madonna (who once said, “His shoes are as good as sex and they last longer”), his heels are famous enough to go by a single name: “Manolos”. “If God had wanted women to wear flat shoes,” wrote Alexandra Shulman in 1994, “he wouldn’t have invented Manolo Blahnik.” After 45 years of making women’s shoes he is opening his first men’s shop, where he will attempt to do for them what he has done for women – create fancy, fun, luxury footwear that is also remarkably comfortable. “His men’s shoes, well…” said his friend Rupert Everett, “they’re like slightly more feminine versions of the women’s shoes.”

While other designers have followed fashion through vertiginous platforms and clompy soles, Manolo Blahnik’s have remained staunchly trendless – typically a modest stiletto, a patent leather Mary Jane, a bright colour, reminiscent of sweeties. And yet, fashion has come to him, whether radical design collective Vetements or young British designer Grace Wales Bonner, who has, he says, “An incredible uniqueness – immediately we got on well.” He smiles, his accent a chocolatey combination of the six languages he speaks fluently. “When I worked at the Royal College I used to end up with the freakiest of them all, the most twisted of them all.” Which, I offer, is slightly surprising considering, and I’m going to say, “you are such a part of the establishment”, or “considering your shoes cost £800”, but he finishes my sentence: “Because I’m such an old old boy, yes!”

Some of his favourite customers, he adds, are those who travel for miles, leaving home at dawn to stand in line for his legendary annual sample sale. “We have queues and queues of young women who could be my great granddaughters. Four o’clock on the first train from, I don’t know where, from Wales or something. I love those women.”

And they love him, too – they stop him in the street, desperate for selfies with this eccentric OAP who designs 600 shoes a year. “Werk, werk, werk,” he exclaims, then checks, “Like Rihanna?” with whom he collaborated on three collections of sandals and thigh-high boots. He always says yes to photos and autographs, slightly bemused, despite having become a household name through Sex and the City. “You can take my Fendi Baguette,” Carrie Bradshaw told a Manhattan mugger. “You can take my ring and my watch. But please don’t take my Manolo Blahniks.”

He does not sleep well. There is an infectious energy that rises from him like heat. He gets migraines that make him, he whispers, dramatically, “vomit”. Night is when he works best. “In fact, by the bed I have a little box with papers and a huge wire with a pen and when I can’t sleep I write. But my dreams are not very funny, they really are not. For instance I went to see Snow White – for weeks I couldn’t sleep.” He has recurring nightmares about she-wolves from Mexican novels, strangling him with sharp fingernails. It takes him some time, upon waking, to recover. “They’re reality for me, which is horrible. And you know, I have this incredible thing about death.” His friend Anna Piaggi, the Italian style icon, used to call him every morning as they got dressed, and the other day, when the phone rang he picked it up and began to chat to her, forgetting she died in 2012. “Señor Blahnik?” said the stranger on the other end of the line. He had to sit down for a moment.

There are many Annas in his life, including Wintour, who only wears Manolos, and who remembers bouncing her child on her knee in his Chelsea store in the 1970s. He had moved to the UK from the Canary Islands – that was the period he was working with Ossie Clark, and became the first man on the cover of Vogue. “I love Mrs Wintour,” he says today. “She seems cold and aloof and distant, but she’s not. She’s so divine. And Grace Coddington, though all those girls are just getting a little bit… tired.” Elsewhere, in the recent film of his life, Manolo: The Boy Who Made Shoes for Lizards, Iman, John Galliano, Naomi Campbell and his great friend Mary Beard describe his artistry, the way he weaves his vast historical knowledge into his work.

As well as Dickens and Flaubert, he is “obsessed” with films – the only benefit of the internet, he says, is the way it allows him to track down lost movies. Last weekend, a rare free day at home in Bath, he treated himself to an Angela Lansbury marathon, from Gaslight to Sweeney Todd. Gaslight, I mention, is being revisited today, as its story – a husband convincing his wife she is mad – has inspired a term that’s used regularly in political commentary. “Agh, everything’s political now which I find is very, very infuriating. I don’t care about politics. I don’t give a damn about those people, they’re so ugly, all of them. If they were ravishing, it would perhaps be different for me. I like physical beauty that you cannot reach, you know?”

Last year, First Lady Melania Trump walked into Air Force One wearing a pair of pointed-toe snakeskin Manolos – she was on her way to Texas to assist with the aftermath of Hurricane Harvey. “Who wears stilettos to a hurricane?” asked Vanity Fair. She has been one of Blahnik’s loyal customers for 20 years and, amid the uproar of this fashion misstep, he commented: “I don’t think she’s insensitive, I think she’s working non-stop to make it work – possibly she was just wearing the shoes she left New York in. I don’t give a damn about [politics] and I don’t know much about it. I love her, she’s a beauty and that’s all there is to it.”

He sighs slightly when I bring her up. It doesn’t interest him. “Melania used to come down to the store and sit down and talk. A very nice woman, and so beautiful. I haven’t seen her recently, but this is not a political figure, she’s married to a ‘politician’ who [and at this point he sneers discreetly] doesn’t matter.”

So he does think about politics? “No I don’t. I have likes and dislikes. Beauty is what’s important to me. I like statues also, that have nothing to say. Like the statues of Canova. Divine. I like things like that, that you cannot touch. The real thing is not exactly my…” He stops. He’s not interested in relationships. “I love living by myself. The idea of having to share something with anyone fills me with…” he shudders. “I mean… I don’t do well. Contact. I can’t stand – oh no – the normal functions of people. I’m very strange, actually, in that respect. Maybe I need help.” And he laughs.

Has he ever had therapy? “No. I know exactly who I am and it doesn’t help you at all. Sometimes when I’m really desperate or crazy, because I have too much to do, I do my ‘mental cleaning’.” Which means returning to the authors he loves, Benito Pérez Galdós, Gore Vidal, Germaine Greer. “How wonderful she was in the 1970s, a woman with guts, saying: ‘This is what it is.’ And she’s incredible now. But now I think she’s not very healthy?” I start to reply and he talks over me. “But she is wonderful. Maybe you don’t like her. I like her. At the time it was shocking. It was too much, but it was true. Nowadays with all these stupid movements and this and that, it gets lost, her original thoughts about the freedom of a woman.”

He finds peace in work. He is happiest in the factory. Elsewhere – meetings, especially – less so. “I’m not very pleasant sometimes,” he smiles, cheekily. “But I never think about me too much. When I do, I say: ‘Oh, what is going on? What is wrong? I should not do this.’ That’s why I say to you: ‘Doctors? No, thank you.’ I go to doctors a lot, but for the two crushed vertebra in my back. I have so many moods. I’m somebody who dreams a lot. I try to run away from this thing – what’s going on in the world has never been so bad as now.”

His favourite people today are taxi drivers, because they talk to him. “I feel, not nostalgic, but melancholic about certain things that are gone. For instance, Bell & Croyden used to be the most extraordinary Edwardian apothecary in London. Then I passed by the other day, and it’s like a huge empty supermarket in Dallas. This is what I really get sad and furious about. Why? Why that need to change something which was perfect? Same with Bond Street. It could be Rome, could be Rio, could be anywhere. Now it’s all Dolce & Gabbana, all that global nonsense.” And yet, he still adores England. “London is still beyond exotic to me. But I have never felt foreign here. I should, perhaps, because my language is not perfect, and my things are not what you’d call English. But I never felt strange here.”

The most arresting shoes from his menswear collection are made from palm trees and raffia and come in a selection of rainbow shades. His favourite is the yellow. Suddenly, he picks up a green one, and folds it into his hand. It bounces back, perfect. The ideal, he says, is that the shoe feels “nonexistent”.

We walk slowly out towards the door, past photographs of the men he was inspired by for this new reboot – travel writer Patrick Leigh Fermor, Gary Cooper – and that’s when he sees the courier, with his stylish bandana, and, for the first time since I arrived, stops talking.