Premier hospitals are part of an international competition for wealthy patients willing to pay extra.
The New York Times reports that many American hospitals offer a V.I.P. amenities floor with a dedicated chef and lavish services, from Johns Hopkins Hospital in Baltimore to Cedars-Sinai Medical Center in Los Angeles, which promises “the ultimate in pampering” in its $3,784 maternity suites. The rise of medical tourism to glittering hospitals in places like Singapore and Thailand has turned coddling and elegance into marketing necessities, designers say. 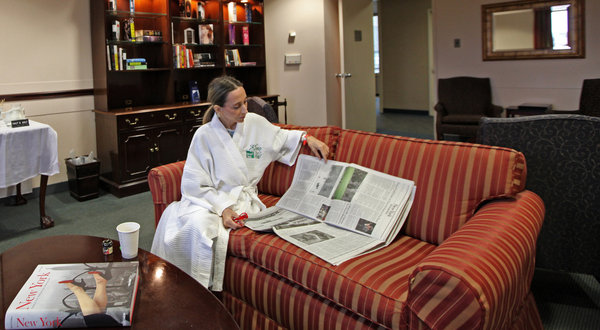 “It’s not just competing on medical grounds and specialties, but competing for customers who can go just about anywhere,” said Helen K. Cohen, a specialist in health facilities at the international architectural firm HOK, which recently designed luxury hospital floors in Singapore and London and renovated NewYork-Presbyterian’s elite offerings in the McKeen Pavilion in Washington Heights. “These kinds of patients, they’re paying cash — they’re the best kind of patient to have,” she added. “Theoretically, it trickles down.”

The conflict echo those of a century ago, in another era of growing income inequality and financial crisis, said David Rosner, a professor of public health and history at Columbia University. Hospitals, founded as free, charitable institutions to rehabilitate the poor, began seeking paying patients for the first time in the 1890s, he said, restyling themselves in part as “hotels for rich invalids.”

“Every generation of hospitals reflects our attitude about health and disease and wealth and poverty,” Professor Rosner said. “Today, they pride themselves on attracting private patients, and on the other hand ask for our tax dollars based upon their older charitable mission. There’s a conflict there at times.”