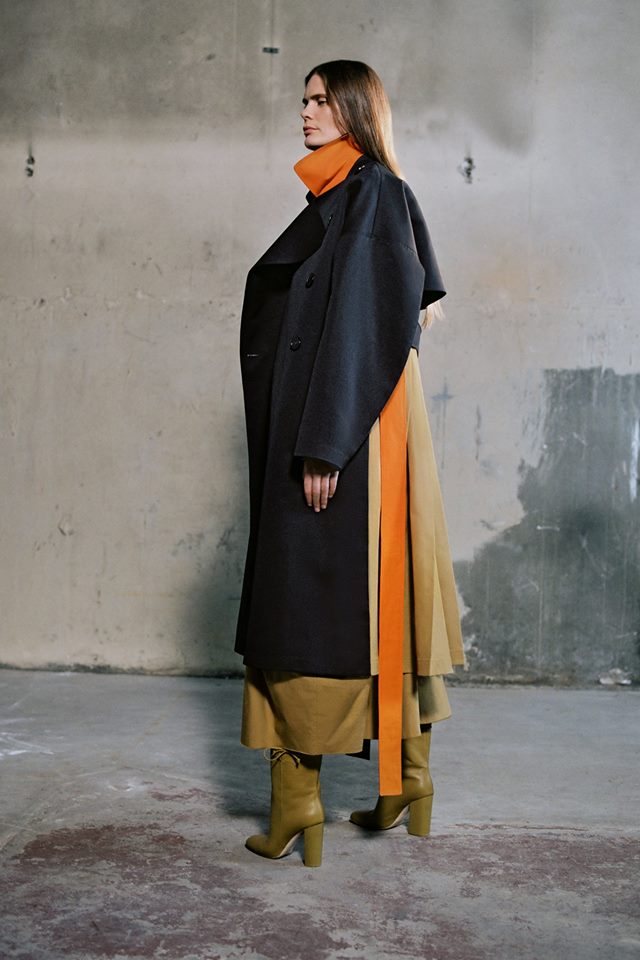 This article titled “London fashion week: shafts of light to the heavy weight of history” was written by Jess Cartner-Morley, for The Guardian on Monday 18th February 2019 17.57 UTC

Orange is not traditionally worn with raspberry, nor caramel with tangerine, but they make perfect sense to designer Roksanda Ilinčić. “We live in a world of crazy contrast,” she said with a shrug backstage after her London fashion week show on Monday morning. “We all feel that, I think, and it creates a lot of anxiety.”

Ilinčić, who begins each collection by sifting through her “precious box of colours – swatches of fabrics, images from books, postcards”, has a gift for finding beauty in the crazy v. “I like putting together colours that are not supposed to go together,” she said.

Burnt orange trousers teamed with a toffee taffeta tunic, finished with a coral pussy-bow flourish opened the show for her brand, Roksanda. A pumpkin trouser suit was matched with a fuchsia blouse. In between the jewel-box combinations came serenely beautiful palette cleansers in chic neutrals, like an oyster-grey soft wool boilersuit. The effect Ilinčić was aiming for was “a rainbow in a cloud”. She commissioned the London-based art trio Troika, whose Borrowed Light installation is on display at the BarbicanCentre, London, on a set where shafts of coloured light fell across a catwalk thickly carpeted with sand (or what appeared to be sand, but was actually salt) like sunset on a beach.

Meanwhile at the National Portrait Gallery, Dame Joan Collins in the front row set the tone of old-school glamour for the Erdem show. On a trip to Rome, the designer Erdem Moralıoğlu visited the 1,000-room Palazzo Doria Pamphilj and became “obsessed” with the story of Princess Orietta Doria Pamphilj, who lived there until she died 19 years ago. A descendent of Pope Innocent X and heir to one of the world’s largest art collections, Orietta had been expected to become a nun but instead returned from a trip to London in the early 1960s with an adopted son.

“What I liked about this story was the sense of the heavy weight of history, and how it plays out in this woman’s clothes. You can really feel this weight, in her home in Rome. There’s this moment when she has been in London at a time of huge social upheaval and returns to Rome, where she becomes obsessed with the idea of protecting her inheritance.” Photographs of her from this time show the influence of swinging London – shorter hemlines, piled-up beehives, feather trims – but “at the same time, she is sewing jewels into the lining of her coat, to carry them across borders”, said the designer backstage after his show, in between posing for photos with Collins.

The backstory was a little heavy going, but the clothes were immediately appealing. The eccentric aristocrat is probably the oldest trope in fashion, but Erdem succeeded in making it fresh. There were grand-dame ball skirts and working-girl pencil skirts. Neat brooch-pinned cardigans were layered over beatnik black polo necks. Some models wore party-girl winged eyeliner, some black netted veils, and some both. Everyone wore fabulous earrings, and took the catwalk at a clip, in kitten heeled pumps.