The X Convertible completes the X concept trilogy and shares its architecture and electric powertrain with the X Concept and X Speedium Coupe concept. 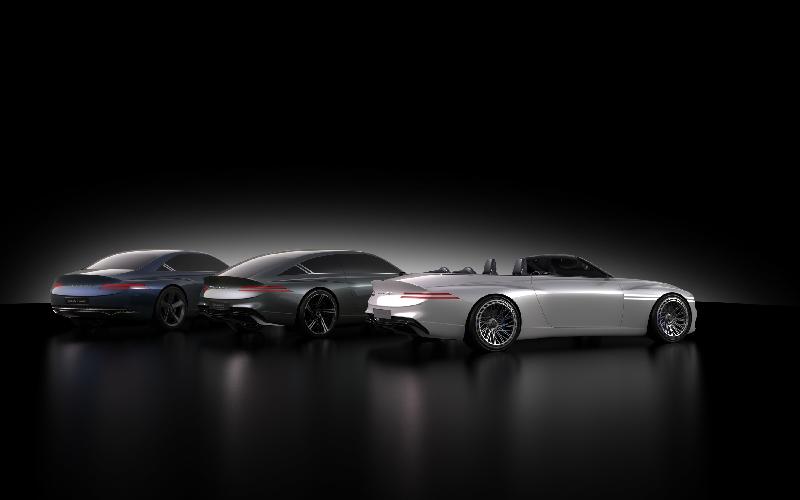 Genesis demonstrated its design versatility last week with the unveiling of the Genesis X Convertible concept in California.

The the luxury vehicle division of the South Korean vehicle manufacturer Hyundai Motor Company hosted an intimate viewing where guests were delighted with a surprise unveiling of a four-passenger open-roof concept. The venue was a natural choice as California leads the U.S. in adoption of electric vehicles and its temperate climate allows year-round enjoyment of the convertible vehicle format.

The EV Concept Trilogy: An Outlook on Genesis’ Future

The X Convertible concept lineage can be traced back to the X Concept, a two-door grand tourer that showcased Genesis’ Athletic Elegance design language. The X Speedium Coupe concept, the second car in the trilogy, displayed the brand’s signature Athletic Elegance in an even more progressive way. It also showcased an evolution of the Genesis Crest Grille, which evolved into a lighting signature to signify its electric powertrain. The X Convertible concept takes the X Speedium Coupe concept further up the emotional scale.

“Genesis started life by producing sedans mainly targeting business users. While creating a new, differentiated design DNA, we gradually increased the emotional appeal by applying this DNA to the SUV typology. Now, electric powertrains have given us the perfect scenario in which to enjoy nature, and propelled the brand to create vehicles with even greater emotional resonance,” said Chief Creative Officer, Luc Donckerwolke. 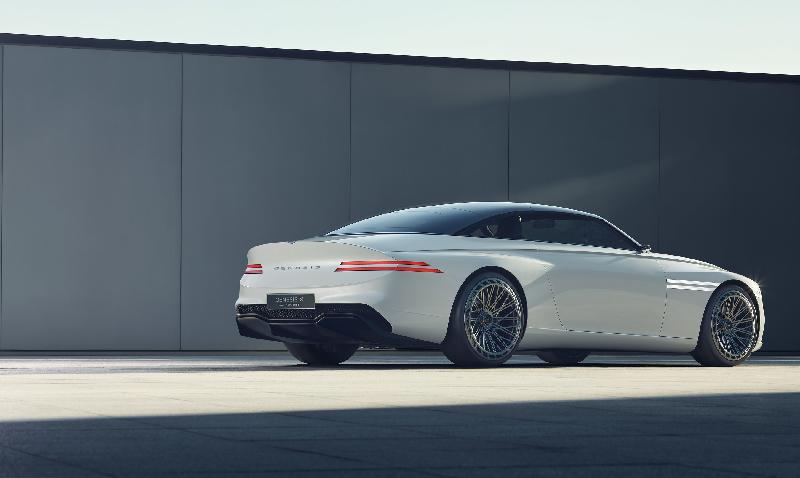 The Genesis X Convertible concept shares its architecture and electric powertrain with the X Concept in 2021 and X Speedium Coupe concept in 2022. Combined with its folding hardtop roof—that integrates transparent moon roofs above the front occupants to provide an open feel even when closed—the architecture and powertrain sets the perfect stage to communicate with nature, allowing users to enjoy the environment in a new way, free from mechanical disturbance.

The Genesis X Convertible concept’s long bonnet, generous dash-to-axle, short front overhang, and long wheelbase are drawn rearwards towards the long deck, accentuating its stately yet relaxed poise. The anti-wedge Parabolic Line emphasizes the regal character of the profile, creating tension between the full surfaces through a gently rearward-sloping horizontal belt line, while muscular blisters around the wheels form an athletic ‘Coke bottle’ plan view and integrate into an elegant silhouette when viewed from the side.

The characteristic quad lights—from which Genesis’ Two-Line graphic identity originates—are also present on the X Convertible concept. As in the X Speedium Coupe concept, this graphic identity integrates the new EV face and forms an abstract of the Crest Grille. The cooling function for the powertrain and batteries has been relocated to lower openings in the front bumper.

The rear end of the X Convertible concept features a concave elliptical duck tail intersected by horizontal quad rear lights, as seen on the X Concept and X Speedium Coupe concepts. The continuity of the elliptical shape is interrupted and crowned by a V-shape indentation that hints at the crest and wings of the Genesis logo.

The wheels are a combination of Genesis’ G-Matrix pattern orchestrated by an aero dish concave section. The spacers of this aero dish serve to extract heat from the brakes. 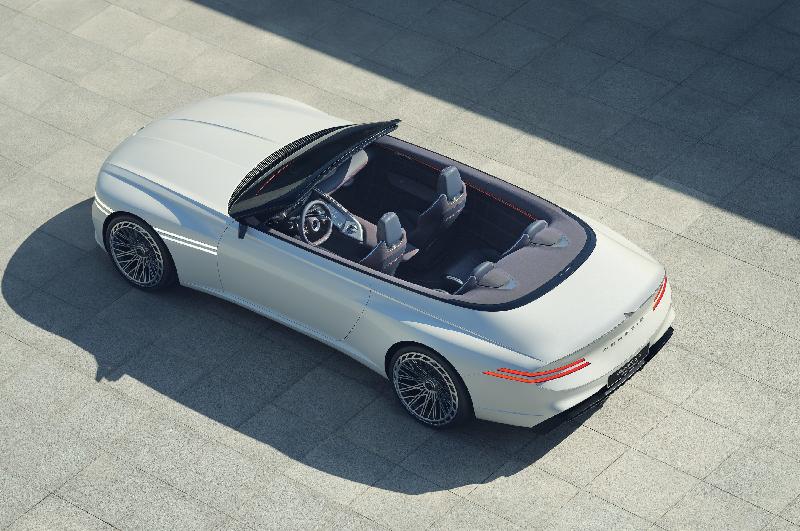 An Interior and Exterior that Capture Korean Aesthetic Nuances

The interior of the X Convertible concept features a driver-centric four-seat asymmetric layout—a consistent theme throughout all recent Genesis concept cars. Its wraparound instrument panel seamlessly integrates with the center console and cocoons the driver cockpit, emphasizing not only its performance-oriented attributes but its connection with the driver.

Inspired in part by traditional Korean roof architecture—a nod to both the brand’s origins as well as the most important aspect of convertibles—the interior design features Giwa Navy and Dancheong Orange colors, which lend the cabin a modern look and feel, befitting the car’s vibrant character.

The primary interior color is Giwa Navy—named after “Giwa”, the roof tiles on Korean houses. Made from recyclable wool fabric, the textured, woven pad graphic wraps around the cabin, contrasting with the smooth and sleek leather surfaces of the seats. Meanwhile, Dancheong Orange—named after the traditional decorative colorings on traditional Korean wooden buildings— serves as a bold accent color, encircling the cabin in a two-line motif and featuring on the stitching of the seats and fabric.

The Genesis X Convertible concept’s exterior is painted in Crane White. White cranes represent nobility and sanctity in Korea, and Genesis wanted to weave these cultural elements into its colorways. The result is an exterior surface coated in white with pearl particles, achieving a luxurious sheen that dynamically frames the contrasting interior. 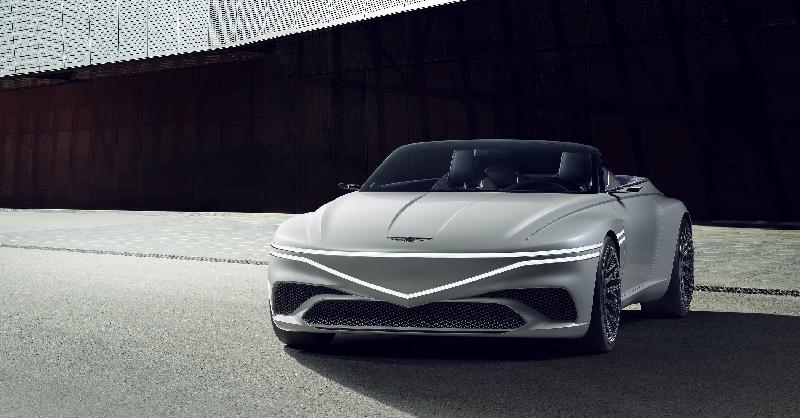 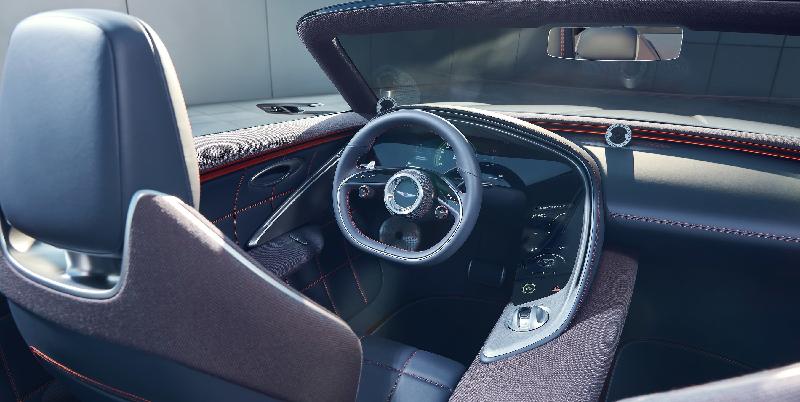 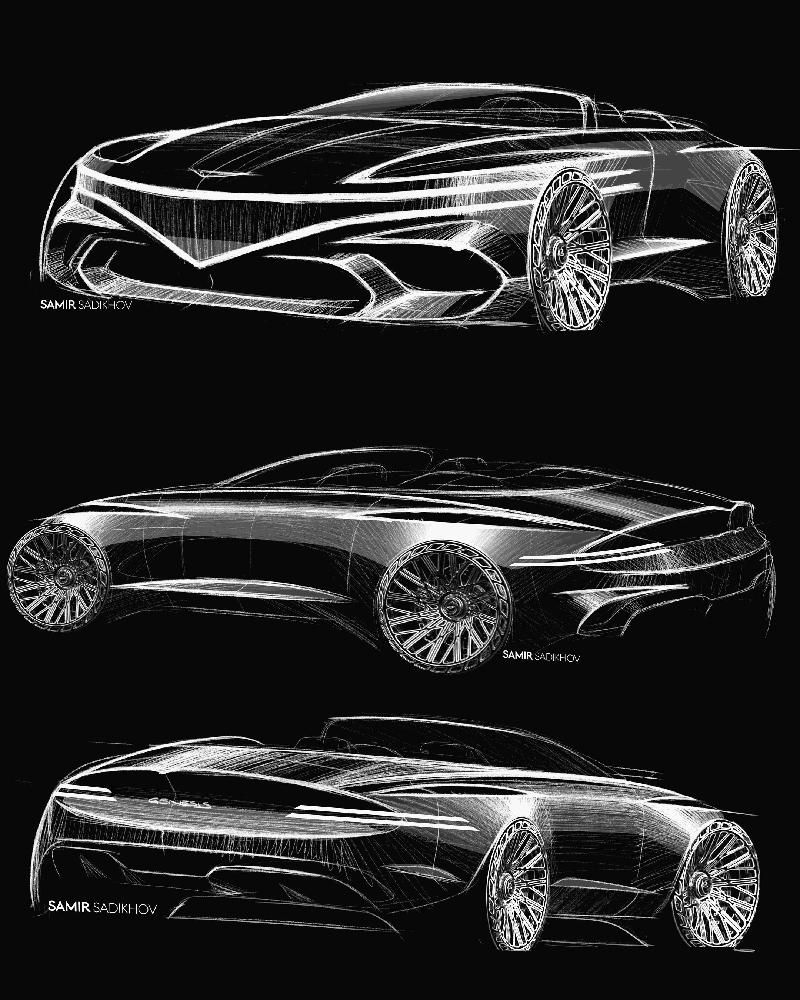 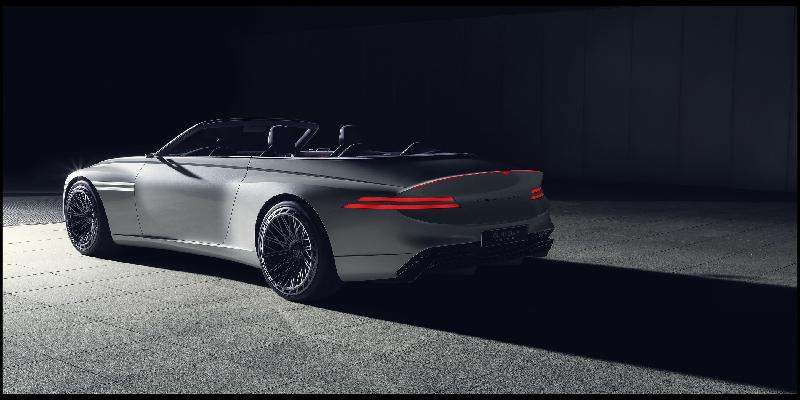 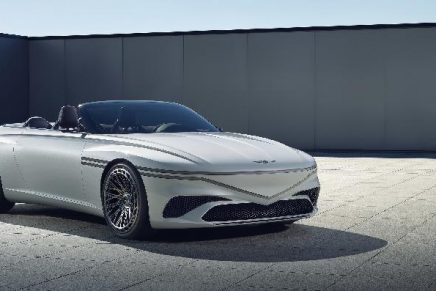 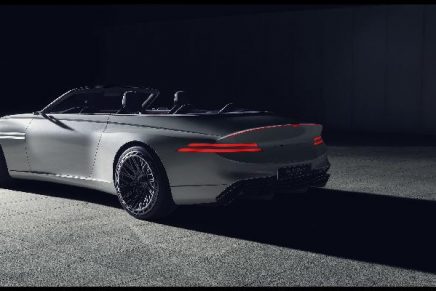 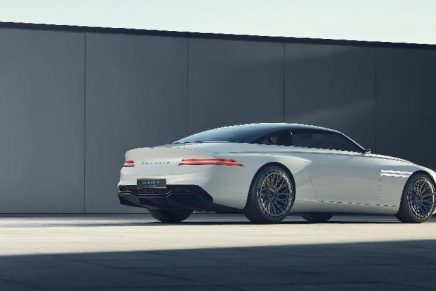 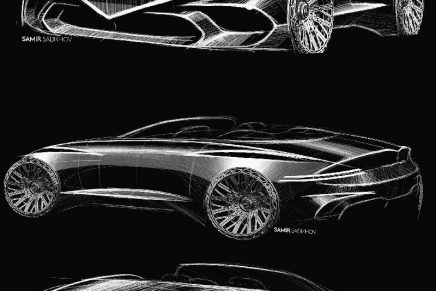 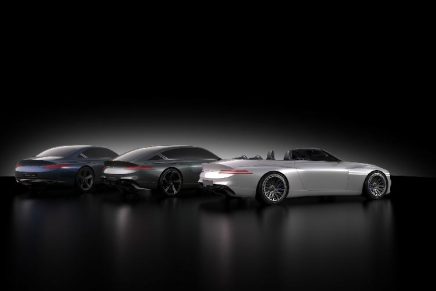 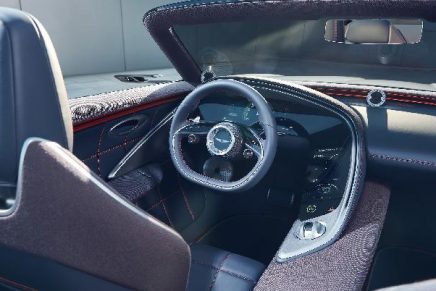 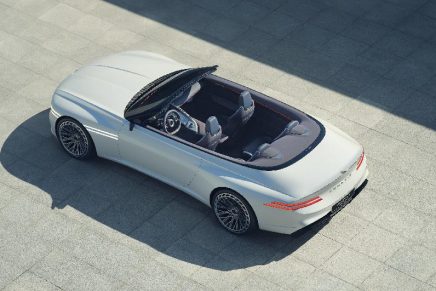