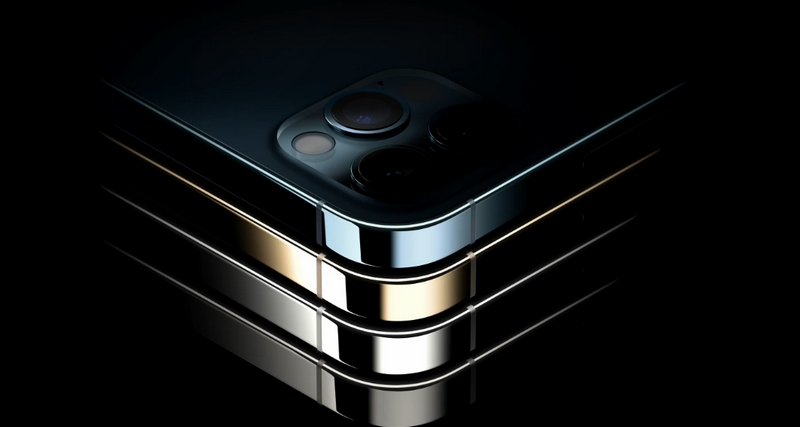 The iPhone 12 Pro Max is the biggest, heaviest and most expensive version of Apple’s smartphone for 2020, a beast in every dimension.

The 12 Pro Max has the same fresh design as the rest of the iPhone 12 range: squared-off sides, all-screen front with slimmer bezels and a frosted glass back. It has the same drop-resistant “Ceramic Shield” technology covering the screen and the new MagSafe magnetic attachment system on the back for wireless chargers and accessories, but that’s where the physical similarities end.

The huge OLED display measures 6.7in on the diagonal, which dwarfs all other iPhones and rivals the Android superphones, such as the 6.78in OnePlus 8 or the 6.9in Samsung Galaxy Note 20 Ultra.

The screen is stunning. Bright, crisp and almost tablet-like at that giant size. Watching HDR video is fantastic, and there is a good set of stereo speakers too.

Thanks to the hard edges I found gripping the 12 Pro Max significantly easier than its rounded and equally heavy predecessor the iPhone 11 Pro Max. I could use it one handed with a bit of finger gymnastics and suffered none of the hand pain I got from trying to grip the bar-of-soap-like 11 Pro Max.

The iPhone 12 Pro Max has the same A14 Bionic processor as the regular 12, 12 Pro and iPad Air, and has 6GB of RAM with a starting storage of 128GB – double the iPhone 12’s 64GB. Performance is equally excellent all round: snappy, slick and fast to process photos, videos or when playing games. Speeds on 5G were similar, with slightly better reception than the iPhone 12 Pro and negligible impact on battery life.

Battery life is class leading at more than 48 hours between charges (eight hours longer than the iPhone 12) with the screen on for more than seven hours. The phone will last from 7am on day one until 7am on day three using 5G for about five hours, with the remainder spent on wifi.

It takes 30 minutes to charge the battery to 50%, 73 minutes to reach 90% but two hours 13 minutes for a full charge using a cable and a £19 Apple 20W USB-C power adaptor, or more than three hours with the MagSafe wireless charger.

Apple does not provide an expected lifespan for the iPhone 12 Pro Max’s battery – typically smartphone batteries last at least 500 cycles while maintaining at least 80% capacity – but it can be replaced for £69. An out-of-warranty service costs £566.44, which includes the screen. The iPhone 12 Pro Max was awarded six out of 10 for repairability by the specialist iFixit.

The 12 Pro Max uses 100% recycled tin in the solder of its main board, 99% recycled tungsten, 98% recycled rare earth elements and at least 35% recycled plastic in multiple other components. Apple is also using renewable energy for final assembly of the machine, and breaks down the phone’s environmental impact in its report.

It also offers trade-in and free recycling schemes, including for non-Apple products. The 12 Pro Max does not ship with headphones or a power adaptor, reducing its carbon footprint.

The 12 Pro comes with the same iOS 14.2 version as the 12, 12 mini, 12 Pro and all other iPhones from 2015 or newer. This includes the home screen visual overhaul with widgets and the App Library folders, enhanced privacy tools and the new Translate app. For more see the iOS 14 overview and iPhone 12 review.

You can expect upwards of five years of software support including security fixes and iOS version updates, which is longer than any other manufacturer of smartphones.

The iPhone 12 Pro Max has the same selfie camera and ultrawide camera as the 12 and 12 Pro, which perform just as well, but different main and telephoto cameras on the back.

The telephoto camera has a longer 2.5x optical zoom, up from 2x. Any increase in reach is welcome, but it pales in comparison to the 4x/5x optical zooms of competitors. The lens is slightly slower than that on the 12 Pro, making it worse in poor light. But both smartphones switch to the more light-sensitive main camera in low-light anyway.

The main camera has the same 12-megapixel resolution but a 47% physically larger sensor, which collects up to 87% more light than its predecessor.

In good light it shoots photos that are indistinguishable from the 12 Pro: highly detailed with good colour accuracy and control of high-contrast scenes.

When the light level starts to drop around dusk the larger sensor captures far brighter, more detailed and less noisy images that are a marked improvement over other iPhones. The same holds true for indoor shots on dull winter days. The dedicated Night Mode is needed less frequently, too, and when it does engage it captures photos quicker than the regular 12 Pro.

For point-and-shoot photographers you get a clearer image. For enthusiasts, the larger sensor offers much more potential for detail when shooting in RAW formats, including Apple’s new ProRAW format that is due soon with a software update.

The 12 Pro Max also has the same lidar (light detection and ranging) scanner on the back for Night Mode portraits and faster autofocus. The 12 Pro Max can shoot 4K video at 60 frames a second, and in Dolby Vision HDR too.

Overall, the 12 Pro Max has the best camera on any iPhone and has improved low-light performance over other iPhone 12 models. It also brings Apple up to par with top competitors, although the 2.5x optical zoom is still some way behind the best in the business.

The iPhone 12 Pro Max is the most feature-rich Apple smartphone this year, but comes at a significant price – both monetary and physically.

It sits firmly in the superphone bracket alongside the Samsung Galaxy Note 20 Ultra and the OnePlus 8 Pro, so big that you may struggle to fit it in small pockets and will almost exclusively need two hands to use it.

You get a huge 6.7in screen, 48-hour-plus battery life, a significantly better camera and improved design and ergonomics over its predecessors. It is certainly not perfect and costs a lot, even if it is only £100 more than the smaller iPhone 12 Pro, but you are getting a lot of phone for the money.

If you can manage its sheer gargantuan size and cost, the iPhone 12 Pro Max is one hell of a superphone.