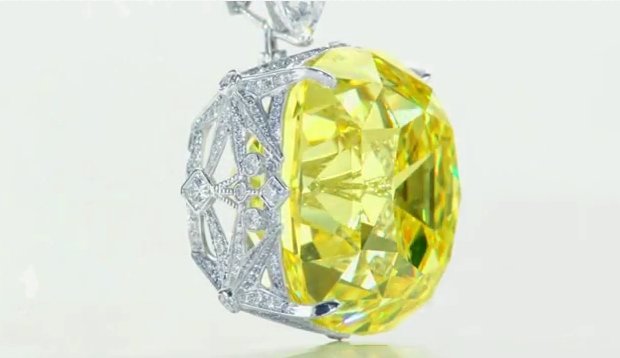 Discovered in the Kimberley diamond mines in South Africa in 1877, Tiffany’s iconic yellow diamond mark its 175th anniversary. On this important occasion, Tiffany & Co. has unveiled a new platinum and diamond setting for the treasure, known as one of the world’s largest and finest fancy yellow diamonds.

“The diamond is the most important gemstone in the world and honours the vision of our founder, whose acquisition of the stone established Tiffany’s diamond heritage.”

The diamond has been previously showcased in London, appearing in the 2006 Bejewelled by Tiffany exhibition at Somerset House. The Diamond has been set on four previous occasions, two of which involve original designs by Jean Schlumberger, Tiffany’s renowned jewellery designer.

The diamond is known to have been worn by only two women during its lifetime. It was worn by Mrs. Sheldon Whitehouse at the 1957 Tiffany Ball held in Newport, Rhode Island, mounted for the occasion in a necklace of white diamonds. It was subsequently worn by Audrey Hepburn in 1961 publicity photographs for Breakfast at Tiffany’s.