The 2018 Green Carpet awardees were announced at La Scala on Sunday 23rd September 2018 during Milan Fashion Week and all recipients demonstrated a commitment to and investment in positive change. “Every recipient at La Scala is reimagining and reworking the supply chain for the future and reinvesting in the planet and in people,” said Eco-Age creative director Livia Firth. “La Scala is the night we can amplify bold and brilliant solutions to environmental and social crises. It is a night for the game changers!”

One category winner was revealed during a special reception at the Venice Film Festival; iconic fashion journalist Suzy Menkes was awarded The Visionary Award. 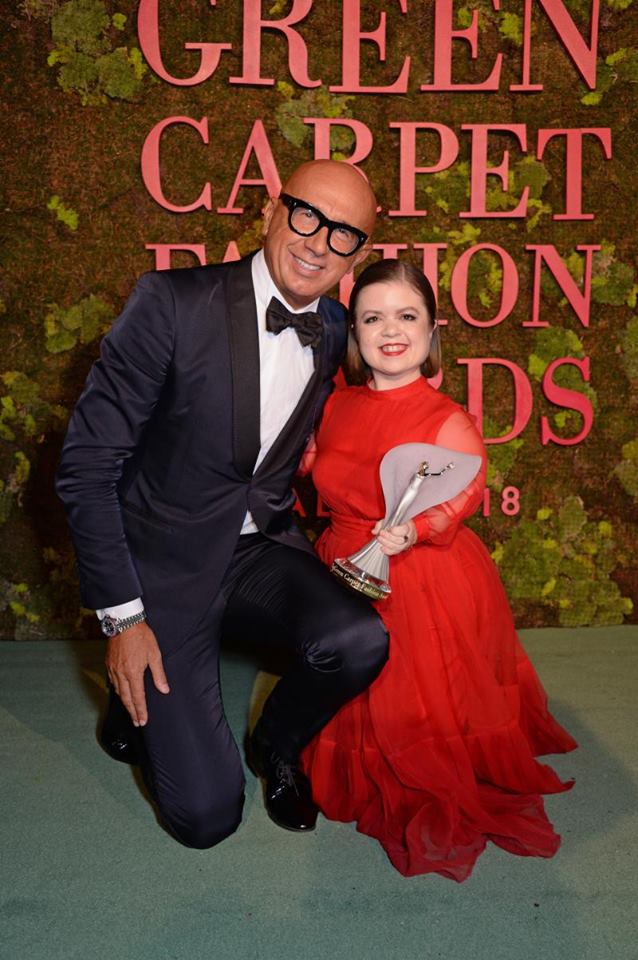 Marco Bizzarri presents The Sinead Burke with The Leaders Award for leading a huge transformation in the fashion system and changing the fashion conversation for good.; photo: eco-age.com/ facebook.com/ecoageltd/ 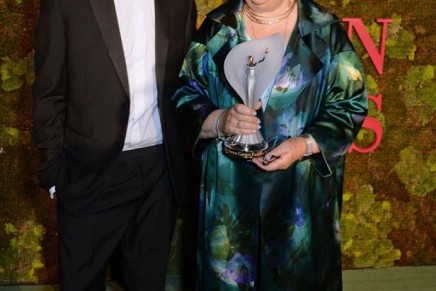 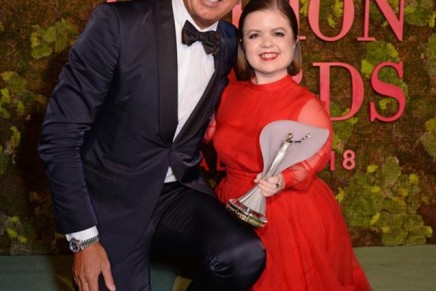 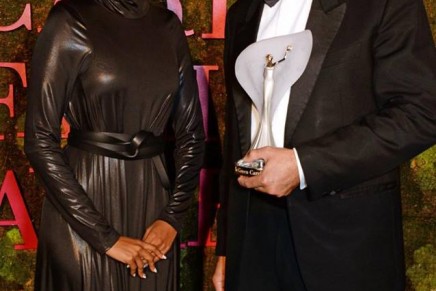 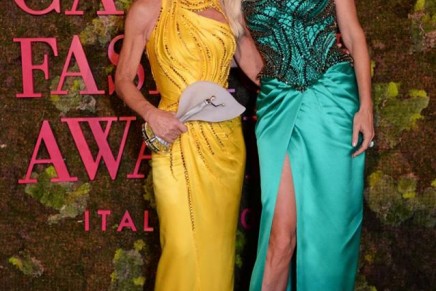 The greatest misconception about the Green Carpet awards, which brought Milan fashion week to a close with a celebration of sustainable fashion, is that they are an alternative to the traditional red carpet. The true aim of the Green Carpet project is to rip the red one up entirely and replace it.

“People called last year’s Green Carpet awards the Oscars of sustainable fashion,” said organiser and ethical fashion campaigner Livia Firth. “I hope that soon we will just be the Oscars of fashion.”

Firth’s strategy is to use glamour to mainstream sustainability. Julianne Moore and Cate Blanchett travelled to Milan to join Anna Wintour and Cindy Crawford for a ceremony for which statuettes are crafted from Fairmined-certified ethical gold.

For Italy, the awards are a valuable sprinkling of stardust on a Milan fashion week that has been depleted by this season’s defection of Gucci to Paris, where the label’s show will be held on Monday evening. But, with embarrassing timing, the ethics of the Italian luxury fashion industry have been called into question.

A New York Times investigation found that skilled work was being outsourced from licensed factories to seamstresses working at home, who were paid as little as one euro an hour while working on clothes that would retail for thousands of pounds. Reporters collected evidence from 60 home workers, mostly female, in the economically fragile region of Puglia, working for exploitative rates and without contracts or insurance.

The revelations are a setback for Italian fashion, undermining the wholesomeness of the Made in Italy slogan and flagging the need for brands to take proactive responsibility in overseeing their supply chains. Carlo Capasa, president of Italian fashion’s chamber of commerce, addressed the issue directly, opening the evening by declaring himself “saddened and concerned” by the investigation.

But he pushed back on Italy’s specific culpability, arguing that the problem of irregular workers was greater in New York City than in Puglia. “Rather than ‘this is Italy’,” he said, “I would say ‘this is the world’.”

Capasa remains convinced that leadership on sustainability is essential to help the country recover pole position as the most dynamic fashion capital. Firth said: “Sustainablity is not just about environment footprint of fashion, it is also about the handprint – the social impact, which is just as important. If you address the social impact of fashion you will fundamentally change it for the better.”

Social impact was spotlit throughout the ceremony. Cameron Russell, who has led an uprising of models fighting harassment and abuse, received the prestigious changemaker award. Sinéad Burke, whose dwarfism drives her activism for inclusivity in fashion, was presented with the leaders award. “The influence of fashion shapes culture,” she asked the audience. “What will you do with your privilege to make this space more accessible?”

Italian entrepreneur Renzo Rosso said: “People like all of us destroyed the world. But now, we are trying to make it better for our children.” Cate Blanchett, honouring Australian wool growers with the eco stewardship award, said the awards “honour those who take their queue from our planet, an approach that is so important to our future”. Julianne Moore presented a craft mashup award to 20 cobblers of Salvatore Ferragamo, while Elle Macpherson received the wellness award, and Cindy Crawford presented an award to Donatella Versace.

At Cannes film festival this year Blanchett broke with red carpet traditional by a black lace Giorgio Armani gown in which she was photographed winning a Golden Globe in 2014. “It seems wilful and ridiculous that such garments are not cherished and reworn for a lifetime,” Blanchett said in Cannes.

Despite the accusations levelled at luxury fashion this week, Firth believes the biggest barrier to sustainability remains fast fashion, which “wreaks devastation on the industry. There is a reason that the owners of stores like Zara are multimillionaires, and that is that we buy too much crap and we buy without thinking.”