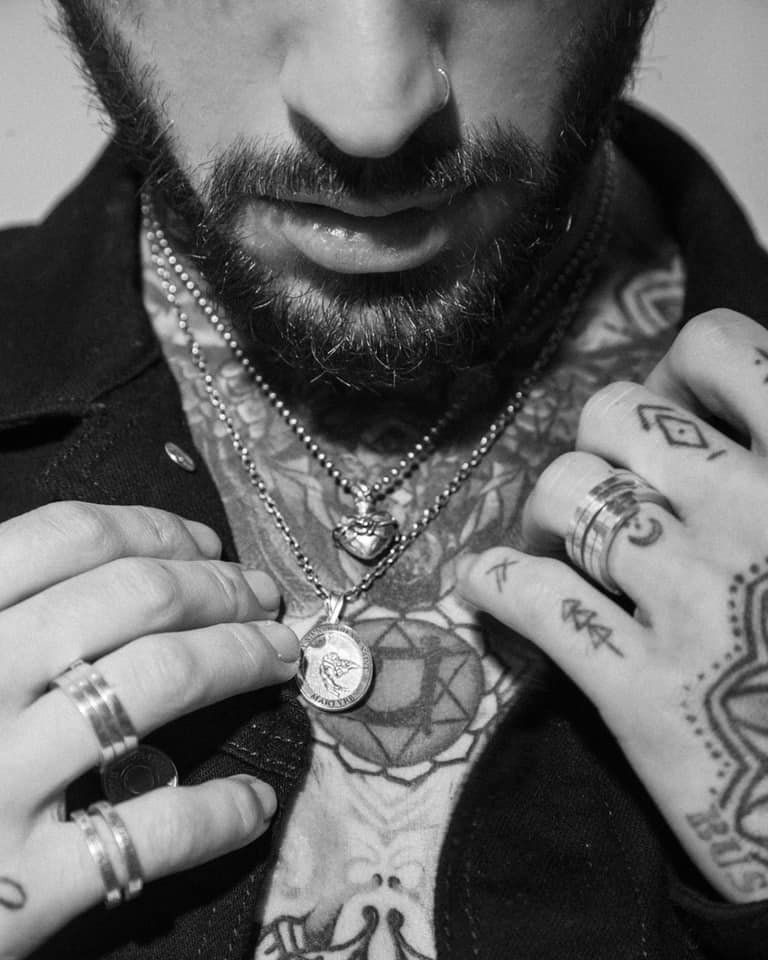 There was a time when wearing a boyband-style dogtag was seen as the peak of male adornment, but now men are increasingly embracing jewellery, stacking rings and bracelets and adorning ears with multiple gems.

This week, the former One Direction singer Zayn Malik was announced as the face of the unisex jewellery label Martyre. Virgil Abloh, a weather vane for fashion’s direction of travel, this week launched more office supplies-inspired jewellery – paperclip bracelets, earrings and necklaces decorated with colourful diamonds – and was pictured wearing one of the collection’s bejewelled necklaces.

Malik and Abloh join a number of male celebrities decking out their ears, necks and wrists. The actor Timothée Chalamet is a fan, sometimes spotted in dozens of pieces at once. The Gucci designer Alessandro Michele is rarely seen without multiple rings on his fingers and chains around his neck. Harry Styles regularly wears a plethora of gems, having last year pioneered a renaissance of the Renaissance with a single pearl earring look reminiscent of Sir Walter Raleigh.

According to the fashion search website Lyst, searches for men’s jewellery have increased 23% compared with last year, with bracelets the top-performing category.

A raft of brands, such as Miansai, Shaun Leane, Tom Wood, Maria Black and the Chalamet-favourite Vita Fede are catering to demand, offering men-specific jewellery, unisex collections or simply not dividing their offering by gender.

The British jewellery designer Shaun Leane said: “It is exciting to see men becoming more experimental in the jewellery they wear; it comes after a long period of men being afraid to express their personality through jewellery.”

While in some cultures men wearing jewellery is not uncommon, in the west it has been on a journey. “[In] Elizabethan times, men were just as adorned with jewels as the women were as they symbolised fashion, status and innovation,” says Leane.

For years in certain circles, men have been wearing enamelled pins and signet rings – signifiers, says the fashion author Tony Glenville, of “the upper crust and landed gentry”. But now they are “just the tip of the iceberg”.

Functionality has often been seen as a guide to what’s acceptable. In 1860, Cecil B Hartley, the author of The Gentlemen’s Book of Etiquette, said men should let their jewellery “have some use”. Signet rings, for example, were used to stamp and seal documents.

But now aesthetics have taken over. “It’s not about peacocking,” says Glenville. “It’s about jewels. A diamond earring or a brooch, an exquisite necklace or a great bracelet – especially with severe, classic or tailored menswear; it’s a great look.”

It follows a shift towards greater gender fluidity in fashion, with Converse this week launching its first “genderless” clothing line and many more high-fashion labels, from Balenciaga to Tom Ford, opting for coed catwalk shows in recent years.

Mona Jensen, the founder and creative director of Tom Wood, said: “A few years back, I felt men looked at jewellery as more feminine objects. But as traditional ideas of what’s feminine and what’s masculine are blurring, this is no longer the case … Now men and women dress the same, and with this tendency jewellery naturally follows as a key accessory.”

According to Glenville: “The finest exponent of men wearing jewels without it being ‘men’s’ jewellery is Gherardo Felloni.” The creative director at the luxury fashion brand Roger Vivier can be spotted on his Instagram page wearing elaborate green gemstone necklaces and elegant chokers.

“He wears them with ease … just as the women the designers probably originally had in mind. It’s the masculine thing to wear jewels in a throwaway, casual manner, even with the sparkle. It’s not, ‘I’m a man wearing a necklace!’ It’s, ‘Oh, the necklace?’ Nonchalant.”