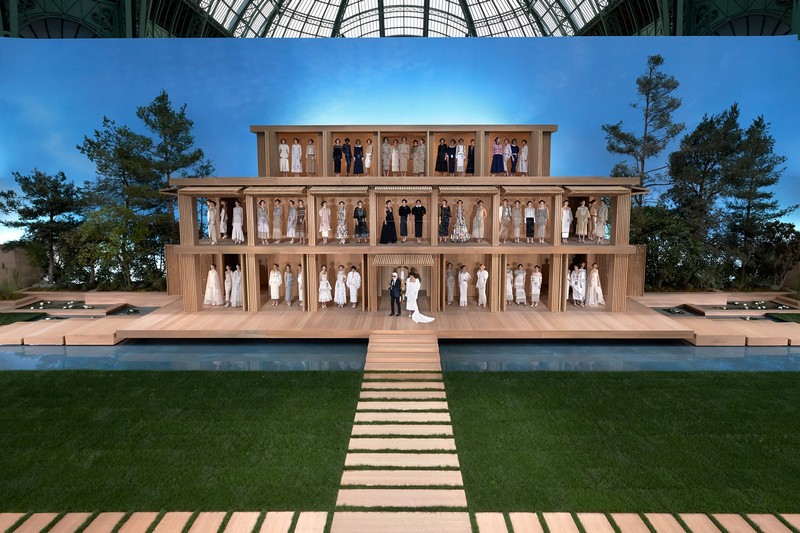 This article titled “From the joy of capes to the great tights uprising: seven style lessons from couture” was written by Jess Cartner-Morley, for The Guardian on Wednesday 27th January 2016 06.00 UTC

Gwyneth at the 2012 Oscars is couture’s new muse

The 2012 Oscars was The One When The Artist Won Everything and Gwynnie wore a cape. With the benefit of hindsight, the film was sweet but Gwyneth was everything, and the spirit of that white Tom Ford gown is all over this couture week. Karl Lagerfeld – who was spotted hanging out with Paltrow in his design studio days before the Chanel show – finished the show with supermodels dressed as superheroes. Gigi Hadid wore a pale-gold full-length cape, open at the front over a matching floor-length embroidered dress. At Giambattista Valli, even short cocktail dresses came with a highwayman flourish at the shoulder. At Ralph & Russo, the finale bridal gown was worn with a cape embroidered with metallic thread, silver bullion, crystals and glass beads. It was so heavy that it required six attendants to help the model turn at the end of the catwalk. Only Wonder Woman need apply.

It is OK to wear tights!

Tights! In January! Whatever next? Shockingly, there have been several sightings of tights on haute couture attendees this week. This is extraordinary news, because everyone knows that the no-tights diktat as laid down by Anna Wintour has been a don’t-even-go-there non-negotiatable since the beginning of time. You think the Ten Commandments have moral weight? Man, you should see the side-eye that norms in hosiery will get should they cross paths with a Vogue apostle at fashion week. But, as I said, we have news just in from Paris of an uprising. The rebel leader is Carine Roitfeld, who this week has been sporting fetching black-lace tights with strappy suede heels. Emboldened by this, the foot soldiers of fashion have been seen in polka-dot sheer black tights under culottes and fishnets under midi skirts. The new rule is: so long as your tights aren’t practical or warm or anything humiliating like that, they’re OK.

To recap: chaos magic is the cult fashion trend for wearing clothes because they are personally meaningful. Sort of the polar opposite of the clean, clinical capsule-wardrobe fashion philosophy. Chaos magic makes fashion out of mementos from meaningful moments in your life, or lucky charms for the future. It has been around for a while, but it’s one of those “alt” fashion trends that you can never quite tell if it didn’t take off, or if it did but you weren’t hip enough to notice. No matter, because the Dior show gave it a commercial spin that might be enough to send chaos magic on to the high street in 2016. Couturier Christian Dior’s personal lucky charms – bumblebees and sprigs of lily of the valley – were made into motifs for the collection, embroidered on to shirt cuffs and cocktail dresses and hung as charms from anklets and chains. Be cynical, if you like, about the luxury marketing of sentimentality, but remember what Roald Dahl said: those who don’t believe in magic will never find it.

Look out for Russian boiled eggs in Pret by summer

Every weird food fad winds up in Pret sooner or later, so fashion week’s eccentric eating habits give you a preview of what you’ll be eating at your desk. See: kale, mac ’n’ cheese, green juice, quinoa. So, we’re tipping Russian boiled eggs – basically, hard-boiled eggs where the yolk is seasoned and mixed with breadcrumbs – to make a protein-bowl cameo sometime soon. Christian Dior’s favourite starter is on a menu that the Plaza Athénée in Paris is offering to fashion week guests, in honour of the hotel’s history with the designer. (The “Bar” jacket is named after the hotel’s bar, the place to see and be seen in Paris in monsieur Dior’s day.) Meanwhile, at Schiaparelli, traditional spring florals were replaced with Veganuary-themed evening gowns, delicately printed with artichokes and chicory, pumpkins and cabbages.

Damn. Donatella just raised the bar on every lazy girl’s go-to 2016 going-out option, athevening (athletic gear in the evening). We were really happy about being able to put a heel with our most-flattering pair of tracky bottoms and call it partywear, but Donatella’s take on sports-cocktail calls for a little more effort. We’re talking Air Max flashes of neon and mesh on floor-length gowns slit to the hipbone and tiny dresses held together with a crystalline version of rock-climbers belaying ropes. (We like to imagine Donatella in Snow + Rock, asking the sales assistant if this rope comes in silver glitter.) Alexander Wang sat front row, giving his blessing to Versace’s take on the racer-back shapes he helped put into fashion. Not much here to actually wear to the pub, but plenty of style inspiration. No one does sexy-yet-intimidating like Donatella.

Hospital corners are the new ruffles

One to watch for on the Oscars red carpet. The strapless gown isn’t going anywhere, but the shape is sharp and origami-influenced, rather than curved and whimsical. At Dior, the bodices rose tight from the waist but were folded back on themselves below the collarbone, leaving a square edge and bare shoulders. At Giambattista Valli, geometric points replaced sweetheart necklines, and at Ralph & Russo bodices came in exaggerated ice-cream-cone shapes rather than clinging to hourglass curves. The look has a neatness that suggests controlled drama, rather than fairytale whimsy. We’re into it.