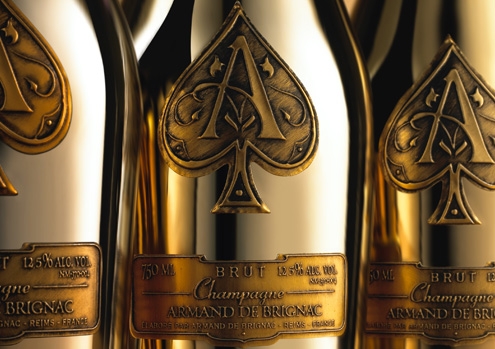 Freshly crowned NFL Super Bowl champions the New York Giants celebrated their fourth Vince Lombardi Trophy with one of the largest luxury bottles of Champagne in the world.

New York Giants Wide Receiver Victor Cruz, teammates and Giants veteran Michael Strahan arrived at The Official New York Giants Post Super Bowl Celebration at Greenhouse at Hyde in Indianapolis, IN, where they were congratulated with an astounding 15L Nebuchadnezzar bottle of Armand de Brignac Brut Gold Champagne – one of the largest luxury bottles of Champagne in the world. The rare, large-format bottle is equivalent to 20 regular-sized bottles and weighs 80 pounds. Cruz, well known for his signature end zone salsa dances, scored the first touchdown of the 46th Annual Super Bowl Championship game and served as the host of The Official New York Giants Post Super Bowl Celebration. 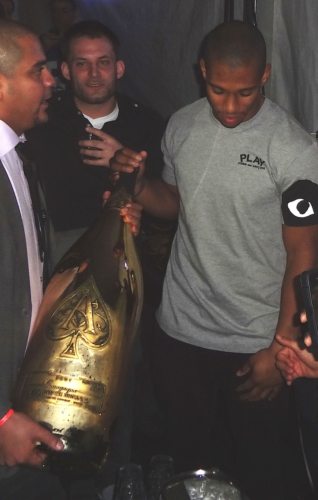 Armand de Brignac continues to serve as the “Champagne for Champions” after the NFL’s New York Giants join teams from the NBA, NHL, MLB and Grand Prix in celebrating their championship victories with the world’s number one rated Champagne.

Armand de Brignac Champagne, a prestige cuvee bearing distinctive pewter Ace of Spades insignias on its bottle, exemplifies unmatched winemaking expertise and a true passion for the art of Champagne.  Armand de Brignac is produced using old-world techniques and a staff of only eight people by a family house established in 1763 in Chigny-les-Roses, France.  The Champagne has been rated No. 1 in a blind-tasting of 1,000 Champagne brands, and counts among its other accolades a score of 98 (out of 100) points from world-renowned wine critic Jose Penin and a glowing review from UK critic Jancis Robinson.  Armand de Brignac is currently available in more than 100 countries worldwide.