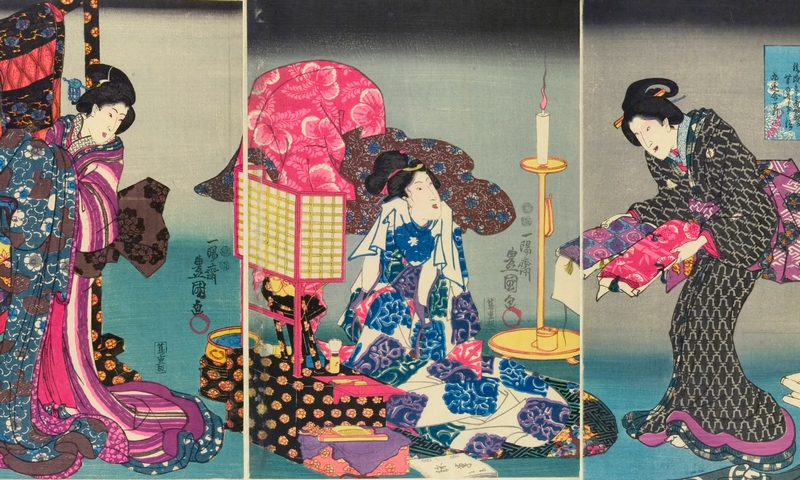 Image courtesy of the Victoria and Albert Museum, London; @vam.ac.uk/exhibitions/kimono-kyoto-to-catwalk

This article titled “Fluid and fashionable: V&A shakes up image of ‘traditional’ kimono” was written by Jess Cartner-Morley, for The Guardian on Monday 24th February 2020 17.52 UTC

More than 100 kimonos, from Freddie Mercury’s favourite cherry-blossom-pink lounging robe to gold-embroidered ceremonial silks worn by Japanese samurai, are to go on display this Saturday in a major exhibition entitled Kimono: Kyoto to Catwalk at the V&A in London.

The exhibition, which also includes original Star Wars film costumes and designs by Yves Saint Laurent, John Galliano and Alexander McQueen, begins in Edo-period Japan: walls are painted in a shade called “green tea” and fluttering white noren, the traditional fabric room-dividers that hang in the doorways of shops and restaurants in Japan, hover above the 400-year-old antique kimonos.

Five rooms later, it ends with a 1 minute 8 second montage of kimonos on film, which includes clips from Killing Eve, Murder on the Orient Express, a Madonna video and footage of David Bowie on stage.

Kimonos have long been revered for their exquisite craftsmanship, but not everyone finds embroidery riveting. With an eye on the bumper audiences fashion exhibitions such as last year’s Christian Dior show have brought to the museum, the V&A curator Anna Jackson has worked hard to make the story of the kimono compelling to a wider audience.

The traditional museum format in which robes are draped like curtains from a horizontal pole, ideal for showcasing intricate artistry, can have the unfortunate effect of rendering the kimono lifeless. To address this, antique kimono are displayed for the first time on bespoke mannequins, showing off the rich fashion history of the garment in all its three-dimensional glory.

From the first room of the exhibition, a view is framed through the type of circular windows found in Japanese teahouses of a mannequin with the elaborate updo of a 19th-century Kyoto courtesan, teetering high above the floor on her geta platform shoes, her satin-silk kimono elaborately embroidered with kabuki actors, ornamental bridges and a lion depicted in threads wrapped in gold leaf.

The very first case in the exhibition presents a triptych of an antique kimono loaned from a collection in Japan, a catwalk piece designed by Galliano for Christian Dior, which has kimono-influenced sleeves and fabric with a sculpted “bar” jacket in the Dior tradition, and a contemporary kimono by the designer Jotaro Saito currently on sale in Tokyo’s fashionable Ginza Six mall.

“The fact that its shape remains constant has meant that people tend to see the kimono as unchanging and traditional,” said Jackson, during the exhibition’s final installation. “We want to show it as fluid and fashionable.”

After beginning in Kyoto, the home of the kimono, the exhibition takes the visitor to Europe to explore how the garment travelled the world. A 1678 Dutch oil painting of Anna Elizabeth van Reede, mistress of Zuylen castle, shows the noblewoman sitting for her portrait in a colourful silk gown in kimono style, embroidered with chrysanthemums and blossom. The outfit would have been chosen to showcase her status and taste, as a vogue for kimonos was imported to Europe on Dutch merchant ships. The fashion for wealthy Europeans appropriating kimono style into an elaborate form of dressing gown is reflected by a sumptuous kimono brought to the museum from Scotland, where it had lived since being made in 1711 for the wardrobe of Sir James Dalrymple.

The show culminates in a globe-spanning final section, with mannequins clustered around giant bonsai-style trees as if promenading in an ornamental garden, where designs by international designers McQueen and Duro Olowu are mixed with Japanese pieces.