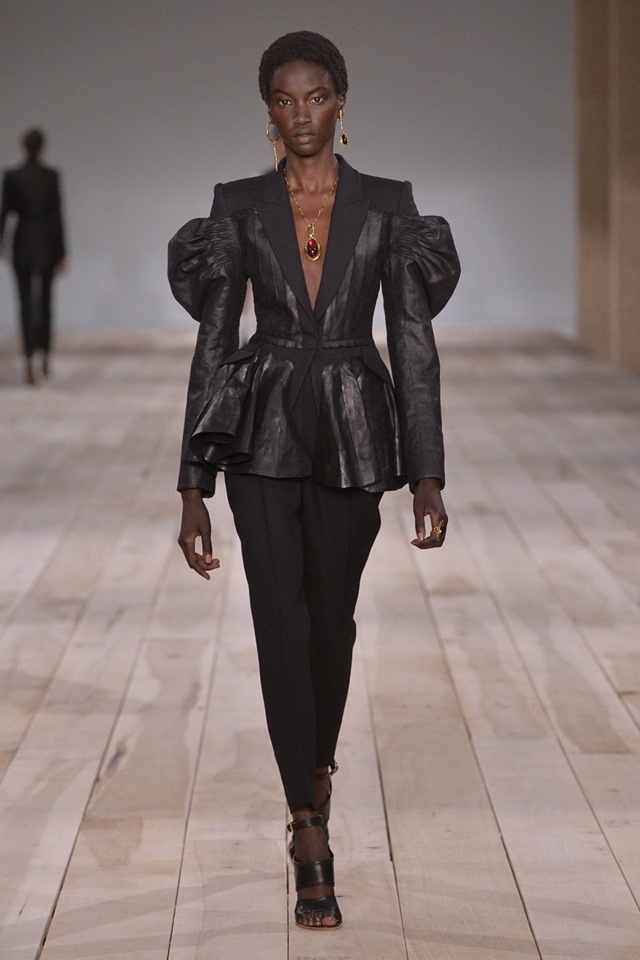 Up to my neck

Indomitably sophisticated, the polo neck is the Old Fashioned of cocktails – something with timeless appeal. It will soften a biker jacket as at Celine, add gravitas to a prairie dress, à la Alexa Chung’s catwalk, and anchor down frilly frocks, such as at Simone Rocha.

A polo neck “represents an uncluttered and sleek athleticism”, says Simon Holloway, creative director of Agnona, whose AW collection featured salt-and-pepper and cream-hued cashmere versions. His references included “the impeccably dressed Garbo or Hepburn, or the radical chic of the mid-century intelligentsia”.

It is true that polo necks whisper, in library tones, of their wearers’ intellect. But they are not all work and no play – brightly-coloured versions bring more of a digital native culture vulture feel than the dusty intellectual elite. And worn under slinky spaghetti straps or bralets as at Versace, they showed covered-up could be sexy.

For Holloway, they signify “subtle power and discipline”, perennial qualities that feel very now. While the catwalks offer on-trend ways to wear them, rest assured – polo necks won’t go out of style any time soon. EVB

Tiny clutches and XL totes may have made handbag headlines recently, but AW19 has something more sophisticated up its sleeve: the frame bag. One brand to watch is Lutz Morris, founded by former Calvin Klein designer Tina Lutz after she fell for the construction of a vintage leather pen box her husband gave her for Christmas. The result: 11 styles, based on an ‘old German cigar box tradition’, already winning influencer fans. SC

Whether or not fashion people will actually be found on riverbanks this autumn is unclear, but they will definitely have the gear of a fisherman. See the unlikely trend for galoshes. At Toga, paper bag uppers appeared on patent shoes; at Dior, dress shoes came with waterproof ankle-bands, trousers tucked in; and Stella McCartney went for welly-esque ankle boots in neutral tones. Jacquemus menswear, meanwhile – inspired by “traditional French workwear” – saw two-tone footwear impersonate heavy-duty gumshoes, similar to those seen in pink at Kiko Kostadinov. Weatherproof and fashionable? We’re sold. LH

Give them the bold shoulder

Q: is a dress even a dress this season if it doesn’t have a bold shoulder? A: probably not. Puffed and ruched, stretched and structured, shoulders were a dominant trend on the catwalk. But these are less Dynasty and Christophe Decarnin’s Balmain, and more sculpted couture pieces, such as the rose silk satin duchess Sarah Burton exploded over draped sleeves at Alexander McQueen. Richard Quinn, meanwhile, contrasted couture-like floral bubbles with skintight black latex to create a line “that is exaggerated but still desirable and not comic”, and Givenchy, Louis Vuitton and Saint Laurent’s versions ranged from floaty to fierce. It wasn’t all red carpet-worthy. At Balenciaga, bold shoulders were given tourist chic appeal incorporated into parkas – Demna Gvasalia’s answer to 2018’s throwback “dad jacket”.

Grey is the new beige

When it comes to colour palettes, boring is the new interesting. Beige was dubbed the colour of last season; this time it’s grey. Dries Van Noten had it head-to-toe, on pinstripe suits, tights and gloves, Acne Studios boasted smoky knits and suits, while at Maison Margiela, dark grey overcoats met with ashy skirts and jackets. Instead of drab, this is a modern symbol of anonymity, a backdrop to fashion’s emphasis on individuality. LH

Gypsophila – the delicate perennial resembling cotton wool and also known as baby’s breath – is moving away from the petrol station forecourt and on to the catwalks of brands such as Givenchy. Expect to see it replacing monstera on your Instagram feed any time now. SC

Knitwear for autumn is hardly news, but this time around basic V-necks have been ditched for statement knits. Tod’s were inspired by traditional Norwegian sweaters, at Victoria Beckham, argyle diamonds lent Gleneagles charm, while JW Anderson made jumpers just that little bit conceptual. EVB

When you think vintage, do you think thrift stores, flea markets and hours on eBay? Presenting vintage 2.0 where designers turn unwanted clothes and deadstock fabric into unique collections that offer a modern take on sustainable luxury. Former Suno designer Erin Beatty is an example. After closing her New York brand, she wanted to start from scratch. “I was terrified by the predictions for our planet and how I might have contributed to it,” she says. “That’s how I came to vintage.” Her brand, Rentrayage, launching for AW19, joins the likes of Rave Review and One Vintage in creating new clothes out of existing fabric found after “scouring every corner that we can”. SC

The Rugby World Cup is yet to kick off but fashion is already on board, with the return of vintage-style shirts: worn with Peaky Blinders caps at Kent & Curwen; monochrome under a black dinner suit at Todd Snyder; upside down, oversized and spliced into skirts at Burberry; collegiate at Wales Bonner; and a bit futuristic at Xander Zhou. It’s time to dive into the scrum. LH

A trend with legs

Wrinkled knees, school uniform-grey, with crusts of nail polish to curb ladders: tights come loaded with unglamorous associations. But all that’s about to change. On the catwalk this season, tights gave a clash of colour at Ashley Williams (deep orange paired with a yellow dress) and Burberry (bright pink with a muted dress). Elsewhere, they blended into the background at Richard Quinn and added texture and pattern at Asai.

For the brand’s designer A Sai Ta, tights can “amplify a look, or add versatility to a favourite dress”. Think of them not as a necessity but as a way to experiment with your winter wardrobe.

The biggest surprise of the latest trend? That high-denier black tights – so long a high-fashion no-no – have become a hit. See the Balenciaga, Balmain and Alexa Chung catwalks for reference – proof that tights can be used to make an outfit bang and are just as good at providing that all-important bassline to your look. EVB

Brooches will add a jolt of flavour to any autumn outfit. They are also a great hack to conceal accidental spills, as anyone who has watched Phoebe on Friends knows. EVB

The fantastical world of Tim Walker will come to life at the V&A in London this month, in the largest ever celebration of the fashion photographer’s 25-year career. From an impressive back catalogue including Julianne Moore modelling Emanuel Ungaro and one of the most famous and intimate portraits of the late Alexander McQueen to 150 new works he created specially after exploring the museum’s archive, Tim Walker: Wonderful Things is “a joy from start to finish”, says curator Susanna Brown. “His pictures are never about the clothes alone. They’re about storytelling, dreams and make-believe.” SC