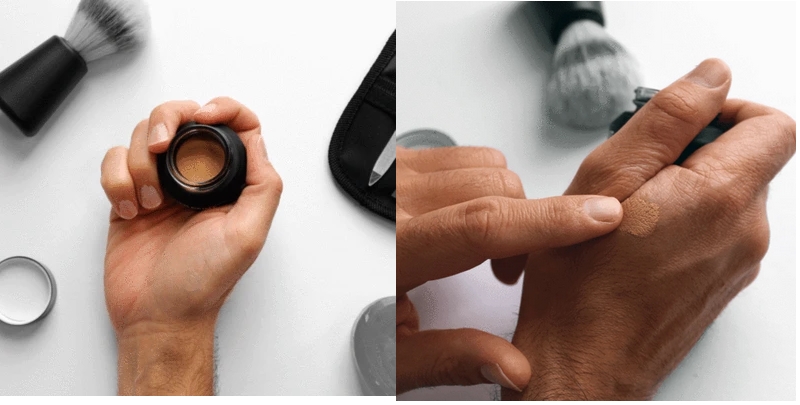 With added Tea Tree Oil to make sure your skin is well looked after, war paint for men Concealer produces a 5* cover-up to hide and illuminate. @warpaintformen.com

This article titled “Face time: will the new makeup for men hide my blotches – or create new anxieties?” was written by Sam Wollaston, for The Guardian on Tuesday 14th January 2020 07.30 UTC

It has been a while since I wore makeup. A bit of eyeliner and mascara in the 80s, not a lot since. Now, at 54, the cracks, bags and blotches are taking over; a new pop-up makeup counter for men could be what I need. It has popped up at John Lewis’s Oxford Street store in London, which is safe and reliable, right? And the British brand doing it is called War Paint for Men. Yeah, I’m not just beautifying myself, I’m a warrior!

The War Paint founder Danny Gray, 34 (looks younger), will be doing my makeup today, quite publicly, in the menswear department on the ground floor. Since being bullied for his sticky-out ears at school, Gray has experienced body dysmorphia. When, as a teenager, he started getting spots, his sister offered to help conceal them.

Gray has been wearing makeup ever since. “But I could never find a brand I related to,” he says. So he started one. He got a £70,000 investment from Peter Jones and Tej Lalvani on BBC’s Dragon’s Den, although he has since decided to do it without them.

So what can he do for me? “It’s not all about lipstick, eyeliner, big bold colours,” he says. “It’s simple stuff to even out your skin tone, make you feel confident.” Which is maybe 90% a relief, 10% disappointment.

He starts with concealer, the biggest seller (£18 a pot), under my eyes. Will that get rid of the bags? “Not necessarily bags, but you do have dark bits under the eyes.” Yeah, bags. He applies the concealer, blends with a sponge, then a finger. He recommends tinted moisturiser for me, too.

Gray is sure that makeup for men is going mainstream. Twenty years ago, men didn’t moisturise; skincare has evolved massively. “Men’s grooming is the fastest-growing sector in the beauty industry. The next evolution of that is makeup.” The first sale here at John Lewis was to a 61-year-old man who wanted some concealer for his eye shadows.

Now, Gray has got to my nose. I’ve got a bit of redness, broken capillaries – “not too bad” he says. “Sometimes, redness of the skin and blotches can be … I wouldn’t say unhealthy-looking, but nice, even skin tone people relate to wellness.” Give it to me straight, Danny, I look like the guy on the floor at throwing-out time. He applies more concealer. “You can see a massive difference,” he says.

Can I? It’s certainly subtle, I’m looking in the mirror and it’s definitely still me. Maybe a teeny bit less blotchy, but not 100% bag-free. He shows me a picture of himself, before and after, the difference is clearer. I think maybe next time we need to go bolder: foundation, tinted moisturiser, the works. Alternatively, I suppose I could accept myself the way I am, bags’n’blotches’n’all.